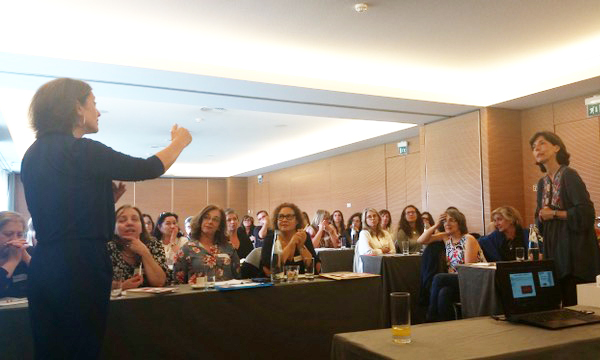 The meeting, organised by the PPC task forces of both the Portuguese Association of Palliative Care and the Portuguese Society of Paediatrics, aimed to promote discussion about the current scenario and ways forward for the development of these PPC hospital programmes in the country, mandated by a law passed in 2018 and previously reported in ehospice.

Twenty-three teams were present at the meeting, represented by their medical and nursing coordinators. These teams, from all but one region (Algarve) of mainland Portugal, are in various stages of development. Some have existed for years and are working regularly, others have just been created and some are just going through the process. As such, sharing the difficulties and the possible solutions for this process was highly valued by all participants.

The National Commission of Palliative Care (NCPC) and some of the regional coordinators were also present at the meeting, further contributing to the clarification of the requests and process to create and work within the NHS as a recognised team. Namely, the Strategic Development Plan for Palliative Care 2019-20, developed by the NCPC, demands that the core professionals of these teams (medicine, nursing, social work, psychology) fulfill certain education and training requirements. These demands not only help raise the quality of these programmes and the care delivered to Portuguese children with palliative care needs, but also aim to promote the future qualification of their professionals in palliative medicine and nursing.

Need for tools and paediatric scales

The meeting also included a discussion about common tools and the need to validate paediatric scales (e.g. for symptoms) for use in Portuguese, since only pain and quality of life scales are in current use. This work has already started, and all teams were invited to participate. At the end, some suggestions were left for in-service education at the teams’ hospitals, aiming to support the change in culture we all want to see.

Albeit lasting only six hours (to allow people to travel from far), this was a very intensive and productive meeting, highly praised by all participants. Not only was it relevant as a means of discussing information, but also as a way to get to know each other and foster personal and institutional connections.

We certainly hope to repeat it in a few months!