Focus on culture and context at this year’s Cardiff Conference 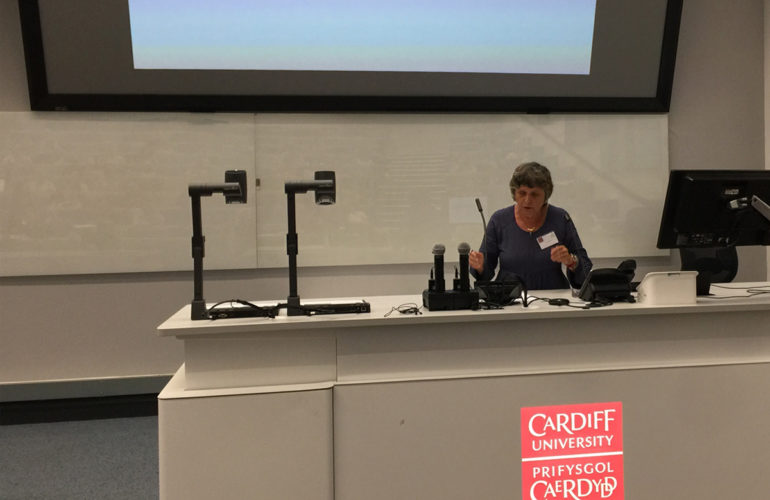 Last week, the 8th International Cardiff Conference on Paediatric Palliative Care with its theme, Words apart: Culture and context in caring for the whole child, delivered a rich and stimulating variety of plenary sessions, presentations and workshops encouraging delegates to consider the role that cultural identity plays in both the delivery and reception of holistic children’s palliative care services.

Day one
Opening the conference, Dr Ann Goldman spoke on the global principles of children’s palliative care and started off by asking those present to consider their answer to the question, “How would you like to die?” and also “What would be a good death for a child?” Questions that encouraged delegates to reflect on the powerful issues they face in the work they do.

Professor Heather Richardson, Joint Chief Executive of St Christopher’s Hospice in South London, followed this excellent introduction with an address that was both challenging and enthralling as she spoke of her own experience of working with people from minority groups in East London. She reminded her audience that teams benefit enormously from having people who don’t think alike and that diversity at every level is something that should be embraced and appreciated for the richness it brings to an organisation.

Presentations during the parallel sessions throughout the first day included sessions on paediatric palliative care in countries as diverse as Malawi, Uganda, New Zealand as well as the UK and the Director of Communications for the International Children’s Palliative Care Network (ICPCN) spoke on how that organisation is working to make a difference in a culturally diverse world.

Day two
Day two of the conference began with a humorous and enthralling presentation on paediatric palliative care in North America from Dr Adam Rapoport, Medical Director, Emily’s House Children’s Hospice and Assistant Professor, Departments of Paediatrics and Family & Community Medicine, University of Toronto. He spoke of what he believed to be the three phases of development of this specialty in that part of the world. The first being the ‘Death phase’ when Dr Balfour Mount introduced the term ‘palliative care’ into Canada and North America after spending time in the UK with Dame Cicely Saunders. The second phase was a time when a greater focus was placed on the minimising of suffering in palliative care. The third and present phase has a greater focus on providing ‘quality of life’.

Dr Rapoport showed with a graph that while child mortality has dramatically improved over the past 50 years, morbidity is on the increase. He indicated that in his practice they see increasing numbers of children with chronic and complex conditions. For these children in particular, it is vital to do what is possible to improve the quality of their lives.

Dr Rapoport identified familiar barriers to the provision of paediatric palliative care, namely uncertain prognostication leading to sometimes delayed referrals, parents who feel they are ‘not ready’ to be seen by palliative care teams and the family’s belief that they are ‘giving up’ by accepting palliative care. The first two barriers have to do with timing and the second and third with preconception.

He described how, due to the public’s preconceptions, since changing the name of their team from the Pediatric Palliative Care and Bereavement Team to the Paediatric Advanced Care Team (PACT), there has been a marked growth in referrals and median days of care provided. He also talked of how the challenge presented by the vast distances needed to travel to follow up on patients in the care of the PACT team has been overcome by recruiting and enabling local adult palliative care practitioners to care for children with the transition of care handled by a PACT Outreach nurse.

The parallel sessions on the second day of the conference included a well run workshop on Teaching children’s palliative care in a diverse culture, led by Dr Michelle Meiring, founding director of PaedsPal and lecturer on paediatric palliative care at the University of Cape Town in South Africa, another on volunteers by Katrina McNamara of Together for Short Lives and the third on training in multicultural east London by Dr Ant Volans from the NHS Foundation Trust,UK.

Day three
The third and final day of the conference began with the presentation of prizes and awards for the best poster and best oral presentation followed by a 90 minute Louis Dundas Symposium under the leadership of Professor Myra Bluebond-Langner, True Colours Trust Chair in Palliative Care for Children and Young People, based at the Louis Dundas Centre for Children’s Palliative Care and jointly hosted by Great Ormond Street Hospital (GOSH). The symposium entitled, Current Controversies in Practice and Policy: What does the evidence tell us? What is needed in the way of further research? provided a platform for five up and coming researchers to showcase their work, which Professor Bluebond-Langner described as “the best research taking place in the UK, and possibly the world”. Professor Bluebond-Langner spoke of the encouraging opening of a second research centre at Martin House Children’s Hospice, in collaboration with the University of York and reminded delegates that for many years the delivery of children’s palliative care services has outstripped evidence base. She conceded that while there are still gaps in our knowledge and a misalignment between practice and evidence, with the work of these two centres, the evidence base for children’s palliative care is beginning to take shape.

Final presentation
The final presentation on day three was made by Dr Richard Hain, conference co-chair, entitled Care at the end of life: Advance and Emergency Care Planning and began with the question, ‘Who should speak for the child?’ as someone has to. He reminded delegates that there is always a distinct difference between ‘needs’ and ‘preferences’ and that the moral authority of parents to make decisions around the end of life care of their child depends on their rational appreciation of the child’s needs and their ability and willingness to articulate their child’s preference. He described parents as experts on their child’s needs and more likely to get it right when making decisions on their behalf and went on to describe decisions made regarding the death of a child as having the greatest impact on the family. He reminded colleagues that “our job is to help families chose the path of least regret” and that in children’s palliative care, family members are also their patients.

Dr Hain described the development of an Advance Care Plan used in his practice which assists the family in thinking about important decisions to be made regarding end of life care. He reminded delegates that the value of the document lies in how it encourages open communication and said that parents can, but are not required to sign the document, as some are reluctant to do so. All decisions recorded on the document can be changed, if the family so desires. Parents are given a copy of the document, which they can choose to show to medical personnel, such as paramedics, if they so wish.

As always, this 8th International Cardiff Conference, held in partnership with the ICPCN, provided delegates from countries as widespread as New Zealand, Canada, Malta, Jordan, South Africa and Malaysia, with three superb days of learning, inspiration and valuable networking opportunities.