People & Places From Leicester to Malawi, tales from an African hospice - ehospice

From Leicester to Malawi, tales from an African hospice 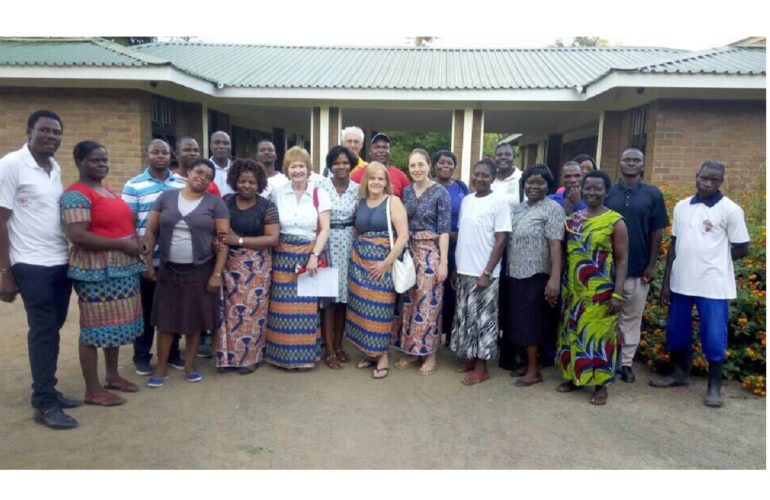 I stepped off the plane and the heat hit me. It was not a horrible heat, but definitely a dry one. We had spent 24 hours flying from the UK to Malawi which included three connections, and to be honest I was just happy that the numerous bags of medical supplies, clothes and stationary had all arrived safely with me and my colleagues, Rose and Cecelia.

We were the lucky trio of LOROS nurses selected to attend a trip to Ndi Moyo, a hospice in Malawi that we twinned with last year. This  twinning was made possible  thanks to a gift left in their will by John and Elsie Orr.

Ndi Moyo was founded by a couple called Lucy and Tony Finch. It is privately run and has an annual income of £170,000, with no government financial support, just from fundraising. They have only 10 employees in comparison to our 300 plus, while they support at least a thousand more patients than us every year.

The aim of our eight-day visit was to see how the hospice is developing its palliative care services, while finding out how the two organisations can benefit one another.

I had been told what it would be like by  colleagues who had previously visited, but nothing could have prepared me for what I saw over the next few days.  From the moment we arrived the poverty was clear. The conditions that some of the people lived in were awful, with many using the living rooms in their very basic straw-roofed huts to grow their own crops too, either to sell or to feed themselves.

We spent the next week exploring the work of Ndi Moyo, which supports 4,000 terminally ill patients every year. Although they do not have an inpatient unit, they have an outpatient facility, they visit people throughout the community, and invite families in to enjoy their day centre.

We visited a number of patients, most were in their 40s and many had young children. It was distressing, not only to see  their suffering but also to see the conditions in which they were suffering. The ‘lucky’ ones slept on mats, while some had to spend their days lying on the floor. They were so happy to see us though, clearly a visit from the Ndi Moyo staff was something they looked forward to.

Later on we re-visited a lot of the families with the community team, who regularly do this unannounced to assess the conditions they are living in, mainly to ensure the children are not suffering. We helped the social team distribute  mats for the youngsters to sleep on, mosquito nets if necessary, and  clothes, stationery and books. It was nice to see them bringing such happiness to so many little lives. They were small things but they made such a huge difference, a concept we noticed was often the case.

Some of the patients needed to be transported to the district hospital for their course of chemotherapy, so we made this trip with them. To say the conditions in the hospital were heartbreaking would be an understatement. Some of the beds had no mattresses, with critically ill patients sleeping on barely a frame.

With nurse numbers drastically low, in most cases the patients’ relatives were actually caring for them. The nurses’ station was basic, and with an over-flowing bin sitting underneath the desk just metres away from extremely ill patients, I could not help but think back to the infection prevention staff at LOROS and how horrified they would be. The emotion I felt was overwhelming, a mixture of sadness and disbelief, as well as gratefulness for the conditions I work in.

Our final glimpse of hospice life in Malawi was in their day centre. Able patients are invited to spend the day in what is a dome-like building under the trees, which has a straw roof but no doors, walls or windows, allowing the breeze to cool everyone throughout the day.

The patients, who can bring their children along, make jewellery, play games, have their toenails painted and watch TV. It was fascinating to see so many of them staring at the television, laughing along at every opportunity. They do not have televisions in their tiny man-made huts, so this was clearly a privilege.

It was so lovely to see such big smiles on faces as patients enjoyed their time in the day centre, proof that the work Ndi Moyo does makes such a difference.

As we sat, painting toenail after toenail, I reflected on my time working with the team at Ndi Moyo and I soon released that our two worlds were more similar than I first thought. In fact, the passion and ethos over there is the same, the reason behind the work they do and their goals are the same. They just want to make life as comfortable as they can for the terminally ill patients they support, just like LOROS does. Unfortunately, they just do not have the facilities to do it.

I really hope our visit benefited them. As well as the physical items we took over, we talked to staff about their own well-being and looking after themselves, which is vital, but something that seems to be so low on their list of priorities. We also shared with them our advice on speaking to children whose  parents have died, a concept they struggled with and did not always know how to handle.

Best of all though, I have been assured that just our presence encouraged them to keep going.  Showing them we believe  in what they do reassures them to keep doing it.

I was sad to leave. While we offered them lots of advice and support during our stay, I think we equally learnt so much from them. They make the most of every single thing they have and take absolutely nothing for granted. What I saw out there, both the hard times and the happy times, will stay with me forever. I feel so grateful to have seen first-hand the work Ndi Moyo does, it was an unforgettable experience.