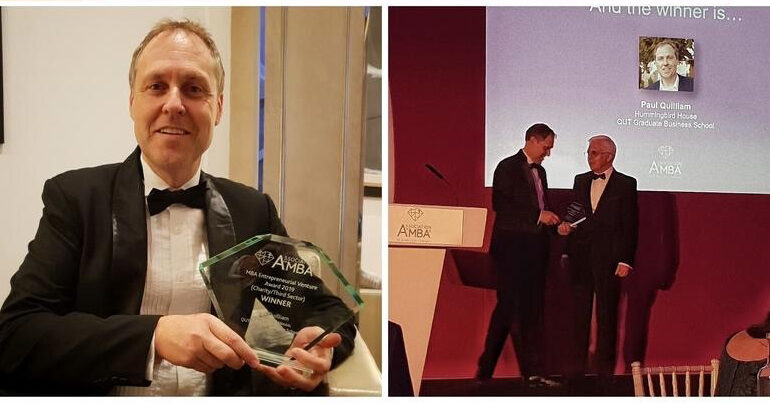 Co-founder of Hummingbird House in Queensland, Australia, and ICPCN International Board of Trustees Vice Chair, Paul Quilliam, was awarded the MBA Entrepreneurial Venture Award at a ceremony held in London last Friday 1 February.

A graduate of the Queensland University of Technology (QUT) Executive MBA Graduate Business School, he was nominated along with another three MBA graduates, for the founding of Hummingbird House.

Mr Quilliam, who co-founded the Hummingbird House Foundation with his wife Gabrielle, received the international entrepreneurship award from the global Association of MBA’s (AMBA) in the non-profit category from a field of nominations from 257 business schools around the world.

Hummingbird House, Queensland only children’s hospice, provides short break stays and care at the end of life care for children with life-limiting condition and their families and help families discover moments and create memories to last a lifetime. Initially the vision of Paul Quilliam and his wife, Gabrielle, who after fostering a child affected by a life-limiting condition, made it their mission to build Hummingbird House. The Foundation was founded in 2011 and the doors of the children’s hospice were opened for the first time on 3 June 2016.

Reporting on the prestigious award presented to one of their graduates, the Queensland University of Technology (QUT) website states: “It took just five years for Mr Quilliam to take the realisation of the needs of Queensland’s 3700 families with children with life-limiting conditions to the opening of Humminbird House in 2016.”

“His goal of creating a children’s hospice offering the “best possible paediatric care in an environment that reflected home, love and respect” was presented with a compelling business case to more than 40 federal and state politicians. An unprecedented level of funding of $5.5 million each from the State and Federal Government followed.”

Hummingbird House is the world’s only paediatric hospice with the full accreditation of a private hospital, offering 24/7 care.

The International Children’s Palliative Care Network (ICPCN) is the only international membership network of individuals and organisations working in the field of children’s pallaitive care. Mr Quilliam became a member of the International Board of Trustees for ICPCN  in 2017 and was appointed to the role of Vice Chair in 2018.

Read more about this story here