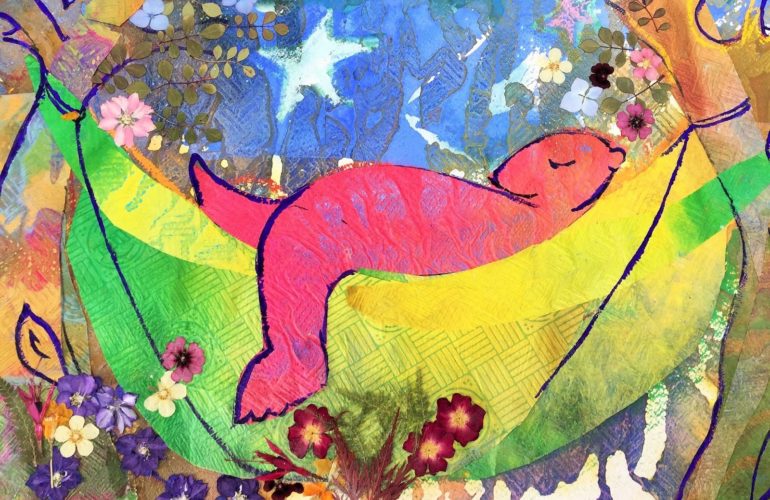 Out of the blue a little children’s book illustrated and written in response to the heartwarming atmosphere of  the world’s first children’s hospice, has found legs of its own, and is now intent on travelling worldwide to children and families everywhere.

How it all began

Two years ago Alexander Mackenzie was sitting in a hot office amid a difficult merger of oil giants and wondering how his life had come to this. The talks had come to a place of reconciliation and he was in what is called a ‘reciprocity circle’. In such a  circle the subject of conversation is orchestrated around how the people in the circle can help others in the same circle to find practical real time solutions to the problems that had emerged for individuals as a result of the merger. Everyone benefits from each others intelligence and experience.

He had been facilitating the group and was surprised when he was asked, “ And what about you Alexander, what help do you need?”.

Caught off guard he gave voice to a meandering thought, “ I would like to find a venue for some childrens illustrations that I have been thinking about.’ A little embarrassed Alexander had been thinking distractedly about the illustrated story he had been writing for his absent son in the haze of the sunny afternoon. As an artist and storyteller he had often pondered the prospect of creating books for children based on stories dealing with difficult issues such as his separation from his son at birth.

“I can help” said an engineer in the group, “ I have a friend that works in a hospice and they might put some of your pictures up if you ask them nicely.”

He followed through and spoke to a volunteer who needed to ask permission from the manager who in turn contacted the hospice for the all clear. He received a call from Kathy Pathing, the manager of Helen House, the world’s first children’s hospice.

“What’s all this about ?” she said in professional tones

Alexander explained his wish and Kathy duly asked him for a sample of his work gently explaining that a high street charity shop might not be the ideal place to sell his paintings amid the tea towels and Lego. Alexander persevered and not only did a series of little paintings with the children’s hospice in mind but also wrote a little tale that went along with the illustrations. He put the illustrations and story together and sent them off to Kathy.

Kathy was infused with delight with what she saw , saying “I knew that there was something very special in Humbert from our first ‘meeting’. The beauty of the art work is of course obvious, but the tale is so meaningful to children and families who are living through a very difficult journey.”

The Hospice went on  to commission the five illustrations and accompanying story to be framed and on permanent display in the recreation room at the hospice.

Alexander decided to crowdfund to have several copies sent to every children’s hospice in the UK , all 54 of them. He set the objective of getting 10 books printed for each hospice and sent out as a Christmas present for 2016. It was a successful campaign. But it did not end there. It seemed that Humbert had been brought to life by the generosity of response received and earlier this year Alexander was invited to talk about the book  at the annual conference of an organisation that works therapeutically with children in trauma called Tellers without Borders. Furthermore they have raised funds to have the book translated into German, Spanish and Croatian as a Christmas present to hospices with these languages for 2018. Currently these books are being printed and will wing their way to children and families of life limiting conditions very soon.

But already it seems the more Humbert gets out and about the more people want him to travel farther and wider. He seems to have struck a chord of hope in the lives of those that read of his journey – a simple allegorical tale about generous presence despite trauma conditions, a colour filled  happiness in spite of pain, and so the journey goes on.

Already translators have come forward and are translating Humbert into Norwegian, Dutch, Danish and Swedish, even as this article goes to press. All of the work from the beginning has been voluntary by everyone except the costs of printing and postage which is where the campaign now reaches out to you.

Humbert likes to Doze has become a campaign that is reaching out to those that care for children with life limiting conditions with a message of delightful hope in the face of adversity. Certainly hospices have been targeted but fresh enquires have arisen for the books to be made available to children’s hospitals and libraries to help children and families understand and prepare for the ‘brighter’ side of pain where it is inevitable.

Myra Johnson, Director of Communications and Engagement, Together for Short Lives has been behind the project from the beginning, saying “Together for Short Lives was thrilled to support and work with Alexander and got right behind his crowd funding campaign. It was his faith and love that made it happen and in doing so brought joy to thousands of children and families in children’s hospices over Christmas 2017.”

Over the last month translators have offered to translate ‘Humbert ‘ into Arabic, Hebrew, Hungarian and Japanese and all offers are being gratefully received but the challenge remains, how do the books get to where they are needed?

A kickstarter campaign has just been launched with a goal of £5000 to meet the next wave of costs getting books to far flung places and already follow up books are in the pipeline planned to address the need for joyful generosity in times of grief.

Now Alexander has set his sights on Christmas 2018 and is set to go again on an all out fundraising campaign taking Humbert abroad to work this little bear’s magic. Should you wish to donate to this worthy cause, please click here to find out more and to donate.

Should you wish to contact the author, email Alexander at alexander.george.mackenzie@gmail.com