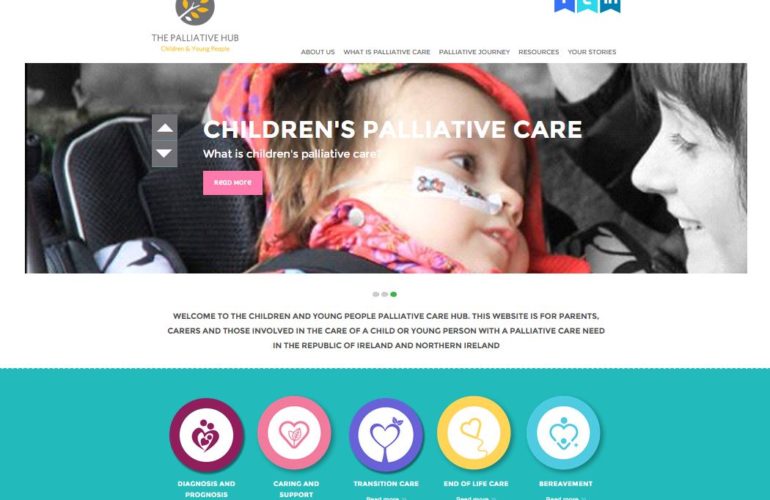 Launching the first all-Ireland website dedicated to Palliative Care for Children, the parents encouraged families whose children face very difficult circumstances to find out more about Palliative Care and the benefits the approach can bring to both child and family.

Speaking at the launch were Martin and Siobhan Murphy, from Newry, whose daughter Caoimhe was born with a very rare disease called Joubert’s Syndrome.

They were told that they would be lucky if their daughter would live for three years. Caoimhe is now 12 and the family have been through a rollercoaster of emotions. Her mother Siobhan said: “I was approached by the palliative nurse asking us how would we would feel about receiving a palliative care approach as part of her care including occasional respite at a hospice.”

“For me a hospice was a place to die. We got a tour of the whole place and it was beautiful and colourful with a place for families to stay. And we now have a different attitude – we have hope. Our heroes are people there, those who work there, the families and children. The palliative approach in Caoimhe’s care is good for everyone.”

The Murphy’s welcomed the launch of the children’s palliative care website.

A positive experience
Also encouraging parents to learn more about Palliative Care for children were Brian and Sharon Thompson who suffered the tragic loss of their daughter Victoria at nine months old.

Her mum Sharon said: “Victoria had an incurable, untreatable rare condition which left her in constant and severe pain. Her nerve endings were un-insulated. She also had horrendous symptoms. Our first question was ‘how do you fix it?’ Then we were told – ‘it can’t be fixed’.”

Living in Donegal, Brian and Sharon found it difficult to access information and services locally. While in the majority of cases seriously sick children are cared for at home, Victoria was so sick that they took up the opportunity of a place in the LauraLynn Children’s Hospice.

For the Thompsons the palliative care approach provided at the Hospice was a very positive experience for Victoria and for them.

“Every professional had time to talk to you, to sit with you. We were allowed to be Victoria’s parents. We could relax a little knowing her needs were being met. Children’s palliative care needs strong voices. Parents should be able to give children the best, especially children at the end of life.”

Information is easy to find
The Children and Young People Palliative Care website was developed by the All Ireland Institute of Hospice and Palliative Care (AIIHPC) to assist parents, guardians, carers and the wider public in understanding what children’s palliative care is and seeks to filter the wide range of information available on the internet to make it easier to find the right information.

AIIHPC Director Paddie Blaney said: “The palliative care community, both in the Republic of Ireland and in Northern Ireland recognised the need for a ‘go to’ point that parents, carers and the general public could access to get independent information on a topic which is difficult to talk about or gather information on. This initiative led by AIIHPC was supported by other agencies all seeking to fill the information gap.

“The website includes photos, stories and quotes about real children and parents who are or have availed of palliative care services in Northern Ireland or the Republic of Ireland.”

The site was officially launched by the Chairperson of the Joint Oireachtas Committee on the Implementation of the Good Friday Agreement, Frank Feighan TD.