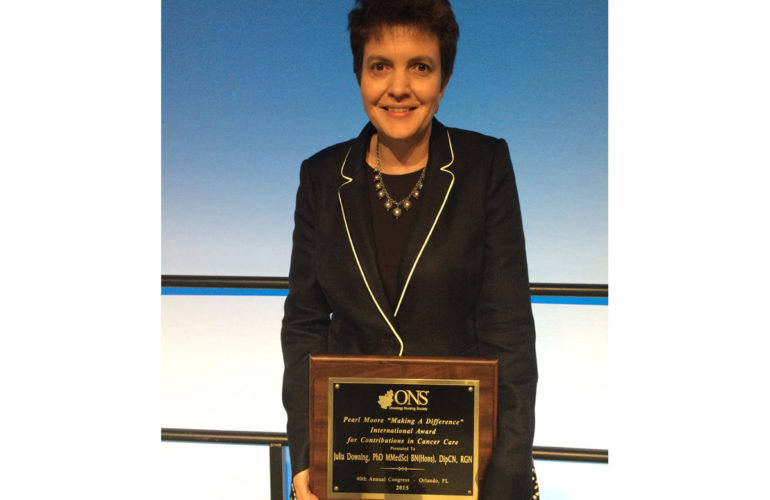 Prof Julia Downing was presented with the Pearl Moore “Making a Difference” award for the international work that she has done to advance the care of patients with cancer. The award ceremony took place on Thursday 23 April at the Oncology Nursing Society’s 40th Annual Conference which took place in Orlando, Florida.

The Pearl Moore “Making a Difference” Awards recognise individuals and teams who go the extra mile to impact the lives of patients with cancer, their families, and their communities. The awards are named for Pearl Moore, the first executive director and CEO of the Oncology Nursing Society (ONS). During her widely respected tenure, she inspired and mentored countless oncology nurses to provide unbeatable care and advocate for patients and their caregivers.

Moore believed passionately that all nurses are leaders. As a result, these awards are intended to recognise emerging local and regional nurse leaders, rather than nurses who already have national recognition.

Professor Downing
Professor Downing received the International Award For Contributions to Cancer Care in recognition of the extensive work that she has done in palliative and cancer care since first qualifying as a nurse.

Prof Downing has extensive experience in research, presenting at conferences and writing for publication, and is on the editorial board of the International Journal of Palliative Nursing (IJPN). She has been involved in a number of local, national and international research studies, and regularly teaches research skills.

She serves on the Boards of several international NGOs including the International Association of Hospice and Palliative Care, is on the Board of Hospice in the Weald, and APCA UK. She is also an Honorary Research Fellow with the Department of Palliative Care, Policy and Rehabilitation, at King’s College London, England. She was the recipient of the IJPN’s Development Award in 2006 and in September of last year also received the Robert Tiffany Nursing Lectureship which honours those within cancer nursing who have made a significant contribution to cancer practice, education, research or management at a national, regional and/or international level.

The award was given during the opening ceremony of the ONS, along with other awards, including the lifetime achievement award which went to Deborah Meyer.