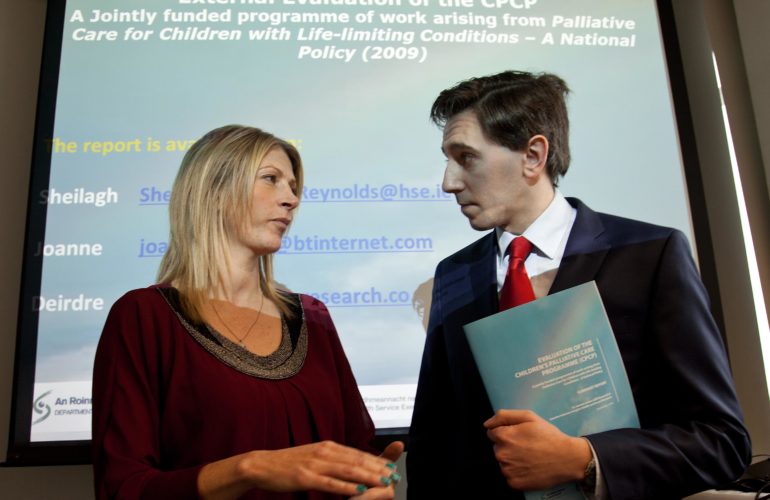 An Evaluation of the Children’s Palliative Care Programme found new initiatives like outreach nurses are “significantly enhancing” the quality of palliative care being delivered to children with life-limiting conditions across Ireland.

Bereaved Lucy Greene who lost two babies Darragh and Ronan to a rare disorder paid a personal tribute to the Children’s Palliative Care Programme at the evaluation’s launch.

Her son Darragh who was born with serious neurological abnormalities died in hospital when he was almost six months old in April 2008. Mrs Green said there seemed to be “very little help available” to the family at the time.  As a result she made frequent long car journeys to the Emergency Department in Limerick with Darragh during his short life to access medical help as his condition worsened.

When Ronan was born with similar neurological malformations in December 2012 the family who live in Doonbeg, Co Clare had access to a palliative care team through the Children’s Palliative Care Programme. The family was introduced to a children’s outreach nurse who was trained in the practice of palliative care and became their first point of call. The family were able to care for Ronan at home avoiding the stresses of hospital visits.

“Because Ronan was being properly cared for by the team he was much more comfortable,” Lucy Greene said.

About 350 children die before their 18th birthday every year in Ireland. There are an estimated 3, 840 children in Ireland living with a life-limiting condition. They have an incurable illness that often requires special care and at times may need palliative care.

Palliative Care for Children with Life-Limiting Conditions – A National Policy was published by the Health Department in 2009 to provide a framework for improving palliative care services for children and families that need them.

The Children’s Palliative Care Programme (CPCP) delivered the priority recommendations of this policy.

The CPCP oversaw the appointment of Ireland’s first consultant paediatrician with a special interest in paediatric palliative medicine.

In addition, a team of eight outreach nurses was appointed and a paediatric palliative care education and training programme for healthcare staff was introduced.

The initiatives were initially 85 per cent funded by the Irish Hospice Foundation at an overall cost of €3.6 million – under an agreement with the HSE.

The new independent evaluation of CPCP commissioned by the HSE, Department of Health and Children and Irish Hospice Foundation found the new services have:

Welcoming the launch of the evaluation report, Health Minister Simon Harris said: “I am pleased that the outcome of this evaluation has been so positive and that the three elements of the Children’s Palliative Care Programme have been welcomed by parents, front line services and stakeholders.

“Naturally there is always room for improvement and further development, but this report is clear evidence of the progress that has been made and the real difference the introduction of these services has made to children and their families.

“We also need to look at how best to develop these services for the future and in light of the changing palliative care landscape, and this report will be an invaluable guide in that regard.”

The evaluation warns that current policy, planning of services and allocation of resources underestimate the number of children living with life-limiting conditions in Ireland.

The report highlights inequity in service provision like bereavement services and some areas still don’t have access to outreach nurses.

Sharon Foley, The Irish Hospice Foundation (IHF) CEO said news that your child will most likely die in infancy or childhood can be overwhelming and parents often find themselves isolated and at a loss.

She said it was heartening to read appreciative comments in the report from so many parents on how the new services provided by the Children’s Palliative Care Programme have made a difference to the lives of their children and their families.

“However we need to acknowledge that there are parents of the country where parents are still waiting for these services or areas where the existing services are overstretched.

“We also need to acknowledge that hands-on nursing care for children at home, respite and bereavement services are far from adequate.

“The key objectives of the 2009 policy remain valid we need to move to the next phase of development in children’s palliative care and identify clear development priorities for the coming years,” Ms Foley said.

More than 100 surveys and face to face interviews with nurses, paediatricians and bereaved parents and parents currently caring for children were carried for the report.

John Hennessy, National Director of Primary Care, HSE said the report demonstrates the “significant progress” made on the implementation of key recommendations contained in the 2009 National policy.

“The Children’s Palliative Care Programme has made an important contribution to ensure that parents are actively involved in decision making about the location of care for their child by asking parents about their preferences concerning the care of their child and where possible supporting their decisions,” Mr Hennessy said.

He said the evidence from the report confirms the “success” of the Children’s Palliative Care Programme to date in improving the communications, co-ordination and the overall quality of care provided.

The evaluation makes twenty recommendations for action going forward including the appointment of a fulltime national co-ordinator for Children’s Palliative Care as soon as possible.

The report recommends the appointment of additional outreach nurses as soon as possible to eliminate geographical gaps in services and calls on the HSE to consider appointing a second consultant with a special interest in paediatric palliative care medicine.

Palliative care for children is an active and total approach to care, from the point of diagnosis or recognition embracing physical, emotional, social and spiritual elements through to death and beyond.

Under the Children’s Palliative Care Programme outreach nurses were appointed on a phased basis over 2011-2013. The Children’s Outreach Nurses Service was providing support to 267 children and their families in December 2015.

An average 33 children were being supported by each nurse each month of 2015.The paediatric consultant with a special interest in palliative care was appointed in 2011 to lead a specialist palliative care service already in place at Our Lady’s Children’s Hospital. A total 220 children received care from the team at the Crumlin hospital in 2015.