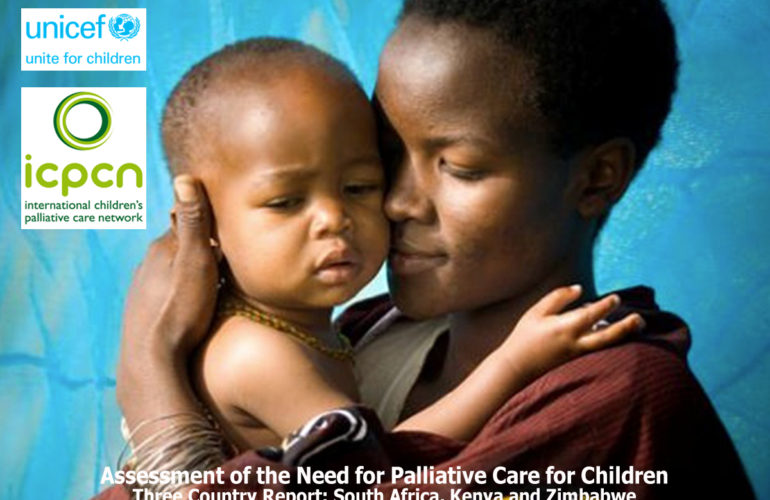 Palliative care for children is specialised, holistic care that greatly improves the quality of life for children with a condition or illness from which they are likely to die before reaching adulthood and includes care for the family. It encompasses expert management of a child’s pain and other unpleasant symptoms while offering social, psychological and spiritual support, including grief and bereavement support for families after the death of a child.

Launch of the Report
Today, 8 November 2013, UNICEF and the International Children’s Palliative Care Network (ICPCN) announced the results of a collaborative research project to quantify the need for children’s palliative care in three sub Saharan countries – Kenya, South Africa and Zimbabwe. The launch took place at Unicef House in London and was attended by health officials from Zimbabwe and Kenya as well as from the World Health Organization.

The Report Assessment of the Need for Palliative Care for Children. Three Country Report: South Africa, Kenya and Zimbabwe carried out by Stephen Connor, PhD, and Chenjerai Sisimayi, MSc is the first study to look at the prevalence of life-limiting illness and life-threatening conditions in countries in the developing world, and compare this with the coverage of palliative care services, to identify the gap between them, and develop a methodology that can be used to estimate the global need.

“The knowledge that so many children are suffering needlessly and dying in pain and so few children have access to palliative care services in these countries is something that should steel every one of us to action,” says Joan Marston, Chief Executive of the ICPCN. “This important research provides us not only with evidence of the enormous need but also a methodology that can be used by other countries to calculate their own needs and gaps in services.”

There has been a growing awareness of the need for children’s palliative care services, particularly in the developing world, made more urgent by the vast numbers of children dying from complications from HIV and AIDS, non-communicable diseases like cancer and other complex chronic, congenital and neonatal conditions. However, to date the actual extent and nature of the need has not been adequately documented and estimates have ranged from 9 to 20 million children.

The study made use of data obtained from sources such as the institute for Health Metrics and Evaluation at the University of Washington and the World Health Organization’s Office of Health Statistics and Informatics as well as national reports and mortality statistics. Interviews with service providers and key informants and national associations were carried out in all three countries.

Some of the key findings of the research include:

Craig McClure, Chief of HIV and AIDS, UNICEF Headquarters had the following to say about the research:  “UNICEF’s mandate is to protect the rights of all children everywhere. Our priority is that children survive and thrive, from birth through to adulthood.  When children suffer from chronic or fatal illness, it is their right to be free of pain and to die with dignity. Sadly, all too often this is not the case.  This study is an important first step to better understand the need and the gap in coverage of palliative care for children.”

The research can be downloaded from the ICPCN website at www.icpcn.org