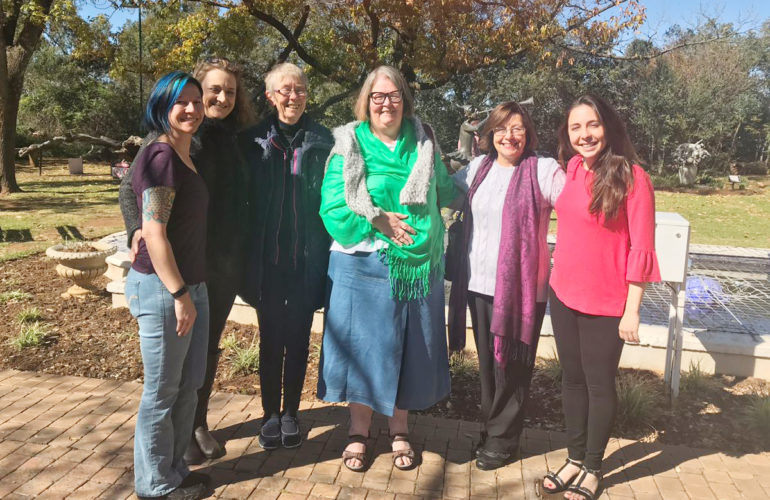 Sunflower Children’s Hospice in Bloemfontein, South Africa, celebrated their 20th Anniversary with a number of different activities culminating in a Sunflower Celebration Picnic on Saturday 9 June for hospice children, staff, volunteers and friends . The celebratory picnic was held in the grounds of the beautiful, historic Oliewenhuis.

The following day, two celebratory services at the Anglican Cathedral of St Andrew and St Michael were held where Sister Frances Dominica, the Patron of Sunflower Children’s Hospice, preached and told us of her frequent prayer: “Lord, let me be the right person in the right place at the right time”.

A number of international guests were present for the festivities together with Sister Frances (who founded Helen House in Oxford, the world’s first children’s hospice); Marie Wrinn, founder of the US based charity No Child Dies Alone, Ruth Smith the UK Chair of Trustees of the Sunflower Children’s Hospice Trust; and Sophie Kieffer from the US, an active friend and supporter. In addition to celebrating with us, Marie Wrinn also ran two Caregiver Wellness Retreats and sessions on Baby Massage;

History of the hospice

Originally part of Bloemfontein Hospice, palliative care was being provided for children with a variety of life-limiting conditions since 1990 with the addition of a children’s day care service which began in 1994. As more and more children, mainly diagnosed with HIV and AIDS, were referred for palliative care, the hospice team, led by Joan Marston, realized that children required a different approach and that to meet their specific needs a separate programme would be required.

Named St Nicholas Children’s Hospice, home care and day care provision began in 1997. A variety of training courses were subsequently developed, including pain and symptom management, play as part of hospice care, communication with children; grief and loss and end of life care.

Dealing with the high numbers of young children dying, an approach was made to the Head of Health in the province for premises to care for these children and a little house, later named Sunflower House, was provided within the grounds of  Bloemfontein’s National Hospital which is still used to this day. The children’s hospice was formally initiated on 9 June 1998. A Sunflower Wall of Remembrance was painted on one side of the house. The wall was painted with brightly painted sunflowers, the centres of which hold the names of all the children who have died in the house.

From that time Sunflower Children’s Hospice has worked closely with both health and social services locally, has received many different and necessary services from National Hospital and has also  been involved in numerous interesting programmes, such as the project which links the children to inmates of two prisons, one local and one in Ohio in the United States.

Since its inception, Sunflower Children’s Hospice has cared for over 7000 children and continues to provide home care and in-patient care within the greater Mangaung area.

You can learn more about this wonderful children’s hospice through their website and by liking their Facebook page.