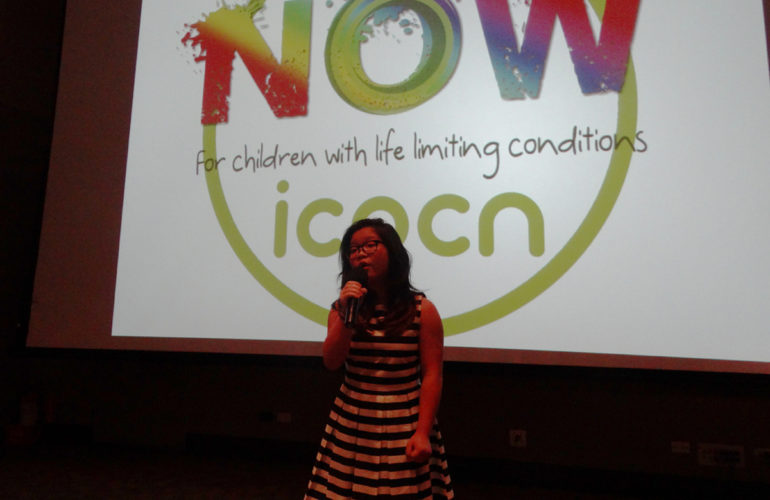 There was standing room only at the first screening of the 52 minute long, made for TV documentary, “Little Stars” last night. The event took place on the eve of the Asia Pacific Hospice Conference now happening in Taiwan at the Taipei International Convention Centre and also served as the official launch of the ICPCN NOW campaign.

Chaired by Dr Ednin Hamzah, Medical Director of Hospis Malaysia, those present were officially welcomed by Professor Cynthia Goh, Chair of the Asia Pacific Hospice Palliative Care Network and the film was introduced by Joan Marston, Chief Executive of the International Children’s Palliative Care Network. Sadly, the films’ producers, Mike and Sue Hill of Moonshine Movies, were unable to be present at the screening but sent their sincere good wishes to all in attendance.

Minutes before the opening credits the audience were treated to a beautiful live performance of the song ‘Live Now’ written and performed by Cateline Khoo, a talented young 15-year-old girl from Singapore. Joan Marston appointed the young singer as an ICPCN ‘Champion for Children’ and presented her with a certificate to that effect.

More about the Little Stars Film
The film, narrated by the award winning British actor David Suchet, tells the extraordinary story of children from around the world being helped to live life to the fullest by their palliative care doctors and teams.

The film reminds us that while children are usually a symbol of unfettered hopes and dreams, far too many are robbed of their gift of good health and their lives are limited both in quality and in years. ICPCN currently estimates that globally over 20 million children live with incurable conditions that will limit or shorten their lives and for most of them their suffering and pain will be great, due to a lack of proper care.

The difference made by palliative care
This uplifting film reveals stories of young people around the world some of whom are living, and at times even thriving, with serious illnesses. Against the odds, these courageous young people are making the most of every moment, thanks to the help and support of their loved ones working together with passionate children’s palliative care teams.

Stories told in the film were captured in the USA, South Africa, Australia, Malaysia and Italy.

Asked for comment after the screening of the film, Joan Marston had this to say:

“While not all of the children featured in this film are still alive, our hope is that their stories, told so powerfully in this beautiful film, will inspire an unprecedented growth in the provision of palliative care for children in parts of the world where it does not presently exist.”

The transparency, insight and emotional honesty of this documentary is guaranteed to leave a lasting impression on viewers and those who were fortunate to see it for the first time, were deeply touched by its message.

The evening was brought to a close by Joan Marston and Professor Maryann Muckaden, Chairperson of the ICPCN Board of Trustees, who said that the film evoked strong emotions and she thanked all those involved in its making for their commitment and passion, particularly its producers at Moonshine Movies.

To find out more about the film and how you can pledge to hold a screening later this year, please go to www.littlestars.tv