In The Media This year 1.5 million children will die from preventable illnesses - ehospice

This year 1.5 million children will die from preventable illnesses 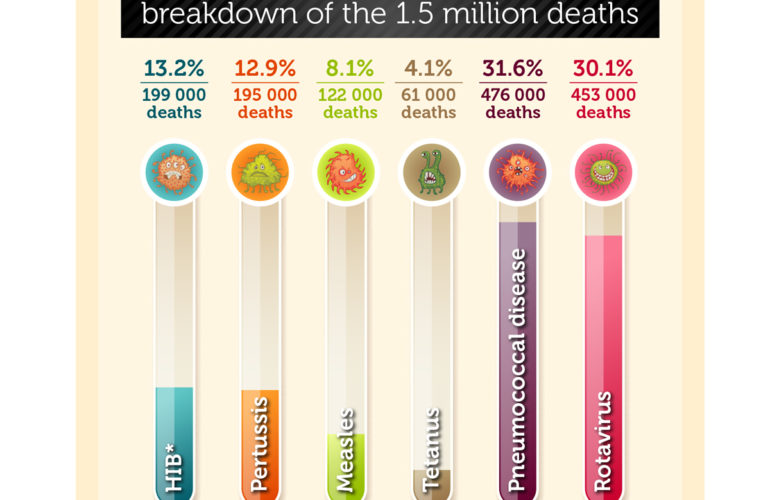 1.5 million children, most of whom live in Africa and South East Asia, are expected to die this year from preventable diseases. A report and Infographic from EurActiv depicts mortality rates in under 5’s taken from the World Health Organization’s Global Immunization data. The Infographic provides a grim picture of the causes of death and shows the 12 countries where 70% of the worlds unimmunised children reside.

According to the World Health Organization (WHO), some 6.6 million children, under the age of 5, died in 2012, half of them from conditions that were preventable, or could be treated with access to simple, affordable interventions.

Approximately 45% of all the mortalities were linked to malnutrition, and more than 70% took place in Africa and Southeast Asia. The leading causes of death were pneumonia, preterm birth complications, birth asphyxia, diarrhoea and malaria.

An estimated 110.6 million children were vaccinated in 2012, but 22.6 million were not. The WHO says that a timely dispatch of Diphtheria-Tetanus-Pertussis (DTP3) vaccines could save an estimated 1.5 million lives annually.

Despite immunisation efforts, a silent cull of the world’s children will take place this year, centred in Africa and South East Asia. In 2014, vaccinations are expected to avert 2-3 million child deaths from diphtheria, tetanus, pertussis and measles. But 1.5 million under-5-year olds will die from preventable diseases and 22.6 million children remain unimmunised.

EurActiv has sourced information from the WHO and GAVI to design a fascinating Infographic which provides a clear depiction of these statistics.

You can read the full report and access the Infographic here.