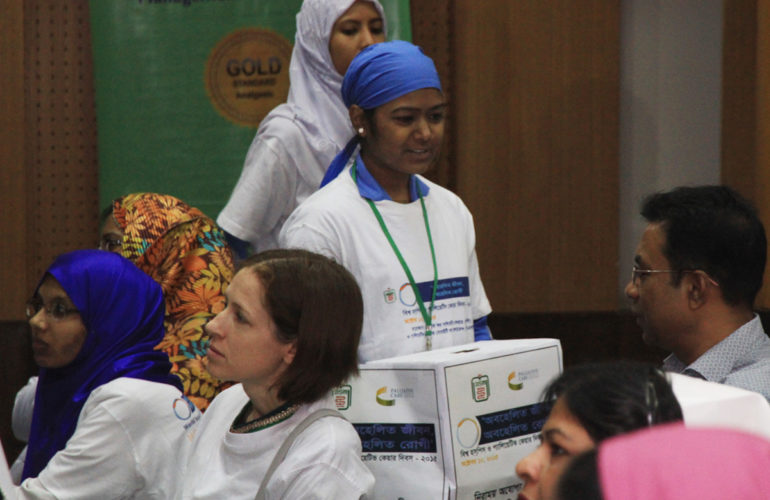 The theme for this year’s event was: ‘Hidden Lives, Hidden Patients’, highlighting the difficulties that many patients face in accessing palliative care.

Many patients are unable to advocate for their own palliative care needs, due to illness or other barriers.

With a population of 160 million, Bangladesh is estimated to have more than 0.6 million people in need of palliative care at any point of time.

The palliative care community must speak out for these patients, ensuring that they have access to the care that they need.

The rally of approximately 200 people were joined by the participants of: ‘Ride for Palliative Care’, a cycling event organised by Hospice Bangladesh, which took place in Dhaka earlier the same day.

This was a gesture of united efforts in increasing awareness and support for palliative care in Bangladesh.

The University program was attended by a massive gathering including a number of significant guests. The University Vice Chancellor, both deputy Vice Chancellors, Chairpersons of different departments, the President of Palliative Care Society of Bangladesh, the President of Sir William Beverage Foundation and representatives of Help Age International, all were in attendance.

The doctors, nurses and other staff were also present. The programme drew attention by the presence of two media celebrities who also spoke on the occasion. Journalists from print and electronic media came to cover the program.

The need for palliative care

Professor Nezamuddin Ahmed, of the Centre for Palliative Care, spoke about the need for palliative care in Bangladesh, emphasising the research findings of the Economist Intelligence Unit Quality of Death Index, and the position of Bangladesh at the very bottom this index!

Dr Megan Doherty, visiting Paediatric Palliative Care Consultant at present working at BSMMU also spoke about the need of palliative care for children, the unique groups which are often ‘hidden’. In fact, it is estimated that globally less than 2% of children who need palliative care are able to access it. Many other speakers discussed the need of these hidden patients along with their hidden needs. Many elaborated their personal experiences in this context.

A team of approximately 50 volunteers from the Centre for Palliative Care were involved in organising the event. The volunteers provided coffee and biscuits and sold fushka (a popular local street snack made from spices and chickpeas) to raise funds.

All funds raised will be directed towards providing palliative care for patients who are unable to bear the cost of treatment through a special ‘Social Welfare Fund’ at the Centre for Palliative Care. They participated in different cultural program like recitation, experience sharing as well as self-reflection.

Additionally, the Palliative Care Society of Bangladesh distributed information leaflets about palliative care and invited interested health care providers and members of the public to join the Society, which is working to advance palliative care in Bangladesh.

Representatives from Unimed & Unihealth Manufacturers Ltd. were present, providing doctors with information about the availability of morphine in Bangladesh. This was an important initiative, as many physicians are still unaware that morphine is available locally and how it can be used to safely treat pain in palliative care patients.

Local media were present and there were articles about the event in the different newspapers the following day, including the two main English newspapers. Additionally, the event was featured on several local television stations.

The event was an excellent way to raise awareness about the need for palliative care in Bangladesh.