14th World Congress of the EAPC draws to a close 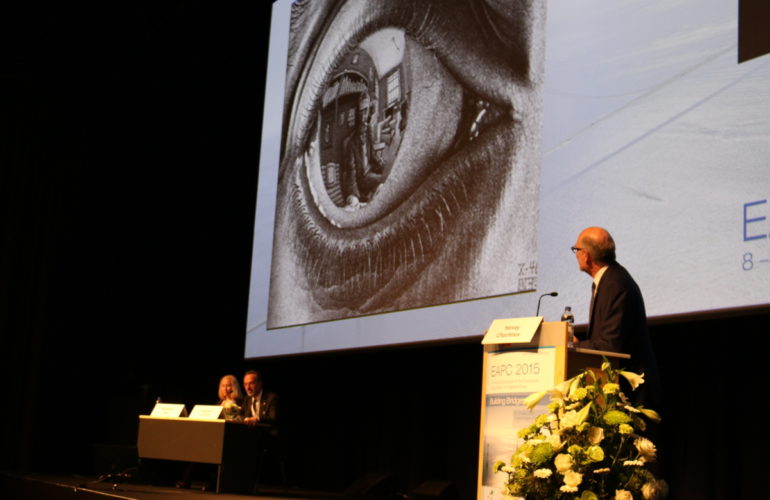 He spoke about the essence of ‘helping’ and drew on the ideas of Kierkegaard to explain this concept.

“Talking about existential suffering and meaning is not abstract,” he said. “It is very concrete.”

Dr Harvey Chochinov, a pioneer of dignity in end of life care, gave the Floriani lecture on: ‘Dignity, personhood and the culture of medicine.’

Dr Chochinov explored the ideas of vulnerability, loss of dignity or “not being seen”, reminding the audience that: “We are all vulnerable: to be alive, to be human, is to be vulnerable.”

He argued that when in a consultation, patients are looking into the eye of the beholder, in this case the health care provider, and they are looking for a reflection of themselves.

He advised the audience to ask themselves: What do your patients see? Do they see a problem to be solved, a checklist? Or do they see a whole person?

He posed the question: How can we change our lens? and argued that maybe we need to be doing something about the way that the healthcare provider is viewing the world. In changing that lens, he argued, we can change the way that patients experience their world.

He suggested using the Patient Dignity Inventory, a useful tool for professionals which covers concerns that impinge on dignity.

He suggested asking the person needing care: “What do I need to know about you as a person in order to provide the best care possible?” and then to ask them whether they want this information on their clinical chart.

EAPC board member, Esther Schmidlin, presented the resultsof the Prague Charter, an important advocacy initiative calling for the recognition of palliative care as a human right, on the final day of the conference, including the fact that the Prague Charter had so far gathered over 7500 signatures.

She said: “We need to act so that patients all over the world receive palliative care when cure is no longer an option. There are barrier to accessing palliative care, resulting in avoidable pain and distress.”

She noted that, despite the progress in terms of the WHA palliative care resolution, the integration of palliative care into all health systems is far from being achieved and that inequalities persist.

“We need to build on what we have achieved and end avoidable pain and suffering,” she said. She reminded those listening that the petition will be closing at the end of May and encouraged people to sign, saying: “Every signature sends a signal.”

The new EAPC board was announced, with Phil Larkin, Chair of the All-Ireland Institute of Hospice and Palliative Care, as president. The full list of board members will soon be available on the EAPC website.

Esther Schmidlin thanked professor Sheila Payne for being president of the EAPC over the past four years, and for bringing ready solutions to complex problems and moving the EAPC forward as an organisation.

The winning paper was: ‘Evidence on the cost and cost-effectiveness of palliative care: A literature review’ by Samantha Smith, Aoife Brick, Sinéad O’Hara and Charles Normand.

Prof Normand accepted the award on behalf of his co-authors. He said: “I think this sends a hugely good signal that work that is bringing evidence together for policy and practice is getting this sort of recognition.

“Bringing the evidence together and helping to put it into practice is the most important thing that we can do.”

The award is for people worldwide who have made a major contribution and changed policy in palliative care.

Dr Riley commended Dr Herrera, saying that he had a passion and a talent for relieving suffering and improving the wellbeing of pateints.

Dr Herrera had set up an innovative model of care in his home country, Spain, taking the form of a complete integration of a compassionate social care model which empowered families and carers and created a whole team working to improve palliative care.

He then worked in Colombia to successfully introduce this model in the face of many barriers.

On accepting the award, Dr Herrera said: “the only thing that makes life worthwhile is to help others. So to dedicate my life to relive suffering is like a dream come true.”

Finally, Niamh Finucane from the Irish Association of Palliative Care addressed the audience to invite them to the 2016 EAPC Research Network conference that will be held in Dublin, Ireland.

Find out more about the EAPC RN Conference 2016 online.