Care A life of waiting - ehospice

A life of waiting 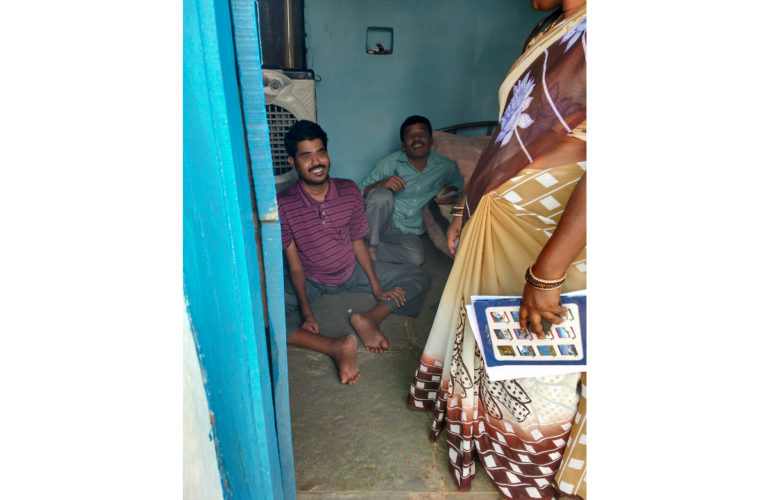 He wakes up at 8am, but his body rests on its side and waits for a man from the neighborhood to come and set it into an upright sitting position.

He sits in that same position on the ground all day, with his back straight and his arms and legs half bent in front of his torso, and he watches television; but he can’t flip the channels.

If anyone passes by, he calls out to them, but sometimes he is stuck watching the same channel. Today he is watching a Telugu news channel. We ask him if he wants it to be changed.

“I am following the developments in the Sasikala story,” says Mr Arjun. “It looks like Palanisami will become chief minister. I am waiting to see what happens in Tamil Nadu.”

To me, it seems that Mr Arjun’s life is a life of waiting.

He was once married and used to work as a driver. Three years ago, at the age of 32, he developed weakness in his legs and was diagnosed with a rare and incurable condition called limb girdle muscular dystrophy.

He was told that the weakness would spread to his arms as well. He lost his job and his wife left him a month later.

Today he is almost a quadriplegic. The horror of it is that his mind is unaffected by the disease, and he has had to wait and watch his body slowly progress into disuse, as if in a waking nightmare.

“There is no power in my legs and my left arm. But there is still some power in my right arm. I can’t lift it, but I can press down with my fingers.”

He demonstrates this by pushing buttons on the mobile phone lying in front of him. A call goes to our physiotherapist who is standing nearby. We laugh.

Ashok, the physiotherapist, has been seeing him for two years as part of our palliative care rural outreach program.

We are in Antharam village, about 50 kilometers outside the city of Hyderabad, where our service is based. Once a week our team (consisting of a doctor, nurse, physiotherapist and counselor) comes out to Chevella Mandal and visits one of the 30 villages that falls under its administration.

We see patients in the community with cancer, stroke, heart disease and other diseases that are life-limiting or terminal and we try to improve their quality of life by providing care for their physical, mental, social and spiritual suffering.

Mr Arjun has developed severe pain in his legs since the past one month and we have started him on morphine for that.

We have identified and trained a 24 year old man from the village to visit him every day for his hygiene needs, feeding, and other daily needs.

We have raised funds to pay this assistant a small amount as compensation for this service every month. We also provide counseling to Mr Arjun and spend an hour during every visit just listening to him.

“Now I can call Ashok. But one day this power in my right hand will also go. Then nothing will be left. I used to be able to straighten myself if I leaned forward or sideways. But now if I lean too far I can’t get back up on my own.”

“How do you keep the phone for charging?” I asked.

“The man who comes for me, he keeps it for charging at night. In the morning he removes it and keeps the phone near me.”

“Is he coming regularly?”

“Do you want some water now?”

“No, I don’t drink water in between. It will be difficult to go to the toilet. I drink one liter in the morning and one liter at night.”

Mr Arjun can’t take tablets on his own either. For this reason we only prescribe medication that needs to be taken twice a day.

I explain the medication and dosage to Mr Arjun’s assistant. He has completed graduation and hopes to get into a post graduate program soon.

I tell him that he is doing a great service for Mr Arjun. He smiles. If it weren’t for this man, it’s hard to imagine how Mr Arjun would get by.

He has parents who live nearby but they aren’t on talking terms with him. Apparently, Mr Arjun had lived a brash and careless life in his youth and didn’t pay heed to any of his relatives. He regrets that today. Our counselor has been sitting on the ground next to him all this while.

It is time now for us to move on and we tell Mr Arjun that we will see him again next month.

As we are leaving his room, I think of the three other patients we still have to visit. I think of getting back to Hyderabad and of tomorrow’s meetings with the pediatric palliative care team.

The author is a palliative care physician employed by Two Worlds Cancer Collaboration, Canada, and working with the Pain Relief and Palliative Care Society (PRPCS) in Hyderabad. He can be contacted at jeanjacob82@gmail.com.

If you want to help Mr Arjun get a full-time home nurse, please write to PRPCS at palliativecarepartners@gmail.com.