A window to humanity 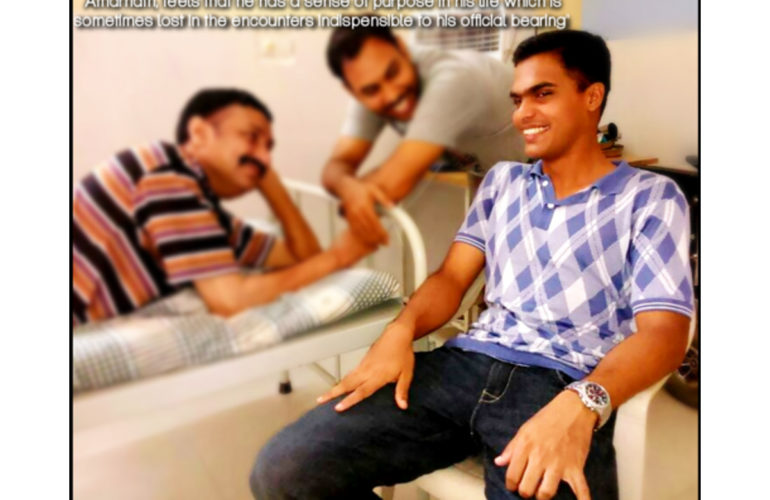 Amarnath watched as the frail woman in a green voile saree sat on the edge of her husband’s bed and wiped the spittle that had collected around the corners of his mouth. Her pleasant countenance betrayed no sign of the grief that she bore. Not embittered by the fact that her husband was an AIDS patient, she tended to him with love and care. Amarnath was amazed at the women’s fortitude, for where he had expected anger and frustration he saw compassion and courage.

Verbose as he was in talking about IPM as the leading healthcare innovation in Kerala during his civil services interview, his practical notion about IPM did not go beyond the perception of a charity organisation until he made his first visit to the Institute. After having been selected into the Indian Police Service, the four months before his training began was spent as a volunteer, a decision which Amarnath believes gave him some of the best days of his life so far. He recounts the incident of meeting the first patient at IPM as wonderful, for that not only changed his idea about palliative care but he was also learning to empathise with people in a way hitherto unknown to him. The experience during the home visits only opened him up further into the field of palliative care.

After his brief stint as a volunteer at IPM, Amarnath together with a group of his friends from college came upon an idea to make a monthly contribution to the institute. This came out in the form of a monthly donation of Rs 15,000 for children’s palliative care, an idea which Amarnath had arrived at in a rendezvous with Dr Suresh Kumar, director of the Institute. Thus, saving money for children’s palliative care became an item in their financial list on which the group of friends has never defaulted.

In spite of the engagement of his demanding job, Amarnath seeks out time to associate himself with IPM and rope in more donors for children’s palliative care. By virtue of the compassionate and caring nature of this voluntary responsibility – which is in stark contrast to the harsh demands of his occupation – he feels that he has a sense of purpose in his life which is sometimes lost in the encounters indispensable to his official bearing. Often having to run into unpalatable realities, Amarnath feels that this distaste of “icky” experiences disappears when he engages with IPM to help people in pain and distress. The four months he has spent volunteering at IPM has given him an experience which has made him an impassioned supporter of the institute’s activities. For Amarnath, this is not just a brief respite from work but an essential window to humanity.

This article was originally published by Tracks We Leave, it appears here with permission.