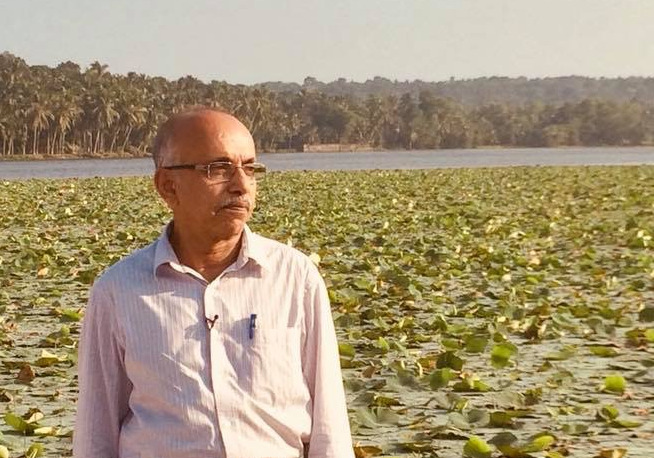 “Before I joined medicine, I had a romantic notion of death.
Death for me was the girl in Erich Segal’s ‘Love Story’. I longed to be her, loved and revered, preserved in my lover’s memory like a hard-pressed dry rose in the pages of his mind.

Death for me was the image of the doomed star crossed lovers of ‘Ek Duje ke Liye*’ caught in a Rigor Mortis like embrace till eternity.

By the end of my MBBS course, the rose-tinted glasses were thrown off.
For more frightening than Death, was Life itself.
Life with bed sores.
Life with pain that cut through like a searing knife into the bone.
Life with no sensation below the neck downwards.
Life with a sick child and financial burdens.
Life with the sheer helplessness of chronic, endless pain.
An incident etched into my mind, is an encounter with one of our Professor’s at Calicut Railway station.

We were both waiting for the Kannur Express which was one hour late. Professor M R Rajagopal, the then Head of Anaesthesia was travelling to Trivandrum to visit his parents. I was on my way to spend the weekend with my grandfather at Kottayam. We were already well acquainted as I was one of the comperes for an Anaesthesia conference on palliative care held the previous year (I was invariably selected for such jobs as I was one among the few Malayali’s who could pronounce memento as memento and not mOmento).

We soon got chatting and I asked Dr Rajagopal what made him take up Anaesthesia. Wouldn’t Surgery or Medicine have been a more aspirational choice?

He smiled and said, “Well, back in my days there was no choosing a specialty. I was attending an interview for provisional lecturer post in Calicut medical college, when the Principal asked me which specialty I was interested in. I eagerly told him I was ready to take up any clinical specialty except Anaesthesia.”

In a deadpan voice he said, “The Principal immediately assigned me Anaesthesia.”

“Well Priya, he was that kind of a man”, he said with a dry chuckle.

I digested this piece of information with a smile. For Dr Rajagopal is one of the stalwarts in the field of Anaesthesia, a pioneer in setting up Pain & Palliative care in Kerala.

The trilingual announcement came booming up. The train was another 15 minutes late. So I continued with my questioning, and asked him what made him foray into palliative medicine.

He told me an incident of a college professor aged 42, with cancer of the tongue who had been referred to him by an oncologist. The man was in severe pain and Dr. Rajagopal, in his capacity as an Anaesthetist was asked if he could help. He certainly could. He injected a numbing substance into the man’s mandibular nerve, located in the jaw, in a procedure known as a “nerve block,” and told the patient to return in 24 hours. The next day, the pain had almost completely subsided and Dr Rajagopal was pleased with his work.

“He asked me when he should come back. I told him there was no need to come back, unless the pain returned. I thought he would be happy I had cured the pain.

Instead, he went home and killed himself that night.”

I looked at him, stunned. It turned out that the oncologist had avoided explaining to the college professor that his cancer was terminal. Instead, he had said he was referring him to the anaesthetist for further treatment.

“It was only when I told him there was no need to come back that he realized his cancer was incurable. He went home and told his family it was all over.”

Dr Rajagopal adjusted his spectacles back into the crook of his nose and quietly said, “I had not bothered to find out about the human being, about his feelings… The incident taught me the need to look outside of pain, to look at the person as a whole.”

The train soon came chugging into the station and we went our separate ways to find our respective bogies.

My next interaction with Dr Rajagopal was during house surgeoncy. We had a one week posting in palliative care as part of our curriculum.

During our classes, he narrated another incident. He was looking after a patient with a gangrenous toe who was in excruciating pain.

“I asked my head of department if I could try a nerve block. He refused – it was not part of routine care and there was a shortage of anaesthetists.”

He paused and said, “I had to tell the man there was nothing I could do.

“I still remember the look of hopelessness on his face.”

Later, when Dr Rajagopal became head of department at Calicut, there was no one to tell him what he could and couldn’t do. That is how he came to treat the college professor. But his patient’s suicide showed him that treating the pain alone was not enough.

“I realized that thinking about nerve blocks was too narrow. Pain is just the visible part of the iceberg of suffering. What is ignored is the part below the surface – the feelings of hopelessness and despair, worries about money, about children. That is what palliative care is about. That man gave up his life to help me understand it.”

In 1993, after he had attended a course run by an English nurse, Gilly Burns, he with his colleagues Dr Suresh Kumar and Mr Ashok Kumar, established the Pain and Palliative Care Society in Calicut.

“Six of us put in 250 rupees each. We found two volunteers, Meena and Lissy, young women with children at school, to register patients and sit and talk to them. Then I would come after work to see them. It very quickly got attention. In the hospital, we were working in a sea of suffering. But in the clinic, you could see people smiling, talking, finding comfort.”

There was a limitation, however. It was exposed early on when a young man came begging for help for his mother, who was in severe pain. She lived in a remote spot where there was no road and so the patient could not be moved.

When the man was told that the doctors could not prescribe without seeing the patient, he broke down in tears. Mr Ashok told him: “We shall come to your home”, and made that trip happen.

That trip was the first home visit. Gradually demand increased. Then someone donated a vehicle. It soon developed into a full-fledged home visit programme with trained doctors making their way to bed-ridden patients, often in far-flung rural areas and sometimes in neighbourhoods in their own cities.

“We help people live at home and die at home. Most want that,” said Dr Rajagopal.

Another hurdle he had to face was the non-availability of Morphine – the opioid drug notorious for its addictive properties, but the strongest and most effective medicine for pain relief.

As a medication, Morphine was easy and cheap to produce. Back then it was not the cost that restricted access, but the law. Morphine had been highly restricted in India since 1985. As a result of this archaic law two generations of doctors and nurses had grown up without even seeing a morphine tablet.

Misplaced fears about drug abuse had condemned millions of terminally ill patients to an unnecessarily painful death. The social taboo was so strong, you had patients begging you not to give them morphine, for fear of addiction, he explained.

In this respect, Kerala had again proved more enlightened than other Indian states and since 1998, palliative care centres in Kerala had been permitted to administer the drug orally.

It took 19 long years, but in 2014, the Indian Parliament finally changed the law. Dr Rajagopal and his team’s current efforts are to get the new law implemented by India’s 29 states and 6 union territories.

The new national health policy of government of India announced in 2017 has included palliative care; but it will require a huge effort to ensure strategy planning, budget allocation and implementation.

Including palliative care teaching in the undergraduate medical syllabus is another aim. He says, “We have been striving to ensure inclusion of palliative care in undergraduate medical  and nursing curriculum; but have not had much success with Medical and Nursing Councils as yet. We have successfully persuaded the Kerala University of Health Sciences ( KUHS) to include it in 2016. We are now struggling to find a way to implement it.”

Dignity in death is another thing Dr Rajagopal stresses on: “Every human being deserves a dignified death” he says in this talk which is worth hearing at least once.

Only 10% of us stand a chance of a sudden death. The rest of us (‘us’ with money in our pockets) are likely to end up in a bed-bound state in a hospital with state of the art facilities.

He reminds us that the richer you are (big, fat medical insurance packet? rich son living overseas?), the more important you are (President? Chief minister?), the more likely you are to face an agonizing death.
It’s important to have these conversations with your loved ones and plan in advance for a painless, dignified exit.

Dr Rajagopal has been an inspiration. His life’s work has been made into a movie, ‘Hippocratic:18 Experiments in Gently Shaking the World.’

It gives me great happiness to see his humble presence in the Rashtrapathi Bhavan receiving the Padma Shri award. His nomination for the 2018 Nobel Prize is exciting for the entire medical community in Kerala and the world Palliative care movement.

He is a simple man with a big vision. An India free from pain is his goal.

*A Hindi movie, the title of which translates as ‘Made for each other.’

**”Life and death are in the hands of the Almighty. Neither you can change it, nor me.” This is a famous dialogue from the movie Anand, where superstar Rajesh Khanna plays a cancer patient.