Armenia’s cancer patients are victims of the War on Drugs 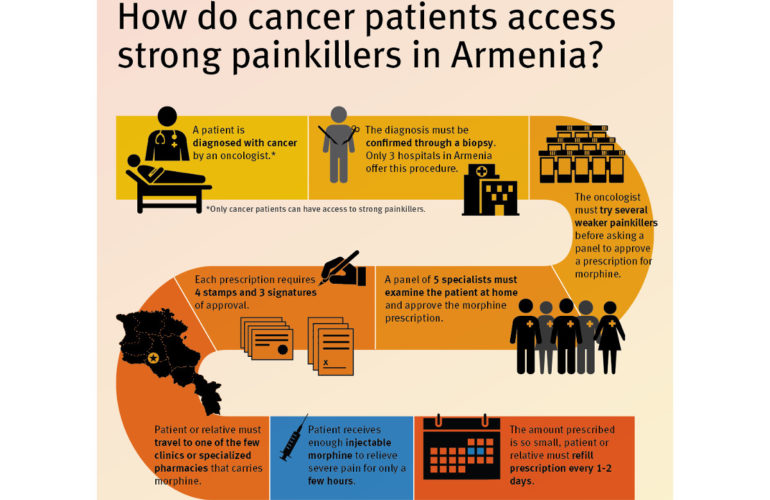 That was how Gayane, a 46 year old cancer patient from Armenia’s capital, Yerevan, described her pain to me. “I can’t sleep at nights and can only do so after several sleepless nights, when I am fully exhausted. I live in pain all the time…”

About 8,000 people die from cancer in Armenia every year, many spending their last days in excruciating pain, a July 2015 Human Rights Watch report found. But fewer than 3 percent of those who need morphine get it.

That’s because the government has put in place nearly insurmountable bureaucratic barriers around the prescribing and dispensing of morphine – all in the name of fighting the illicit drug trade (morphine is essential treatment for cancer pain but is made from the same poppy plant as heroin).

Armenia is not the only country where the response to illicit drugs severely restricts access to critical medicines for patients with cancer and other diseases. The United Nations estimates that about 5.5 billion people – a staggering 75 percent of the world’s population – live in countries with limited or no access to proper pain relief treatments.

But Armenia is a case study for how regulations drafted for law enforcement purposes by officials with no public health knowledge can severely complicate valid medical use of controlled substances.

Under Armenia’s regulations, oncologists can prescribe these medications only after multiple doctors have visited the patient at home – almost impossible in an under-resourced healthcare system such as Armenia’s – and have signed off on the prescription.

Patients or their relatives must then collect multiple signatures and seals before the prescription can be filled.

Doctors only prescribe the medications for two or three days at a time, forcing patients on their death bed or their relatives to spend hours every few days to obtain and fill new prescriptions.

As a result, most cancer patients in Armenia end up like Gayane – abandoned at the most vulnerable times of their lives, trapped in a world of pain, fear and anguish.

You can download the full report, “All I Can Do Is Cry”: Cancer and the Struggle for Palliative Care in Armenia, the summary and recommendations in Armenian and Russian from the Human Rights Watch website, where this article originally appeared.