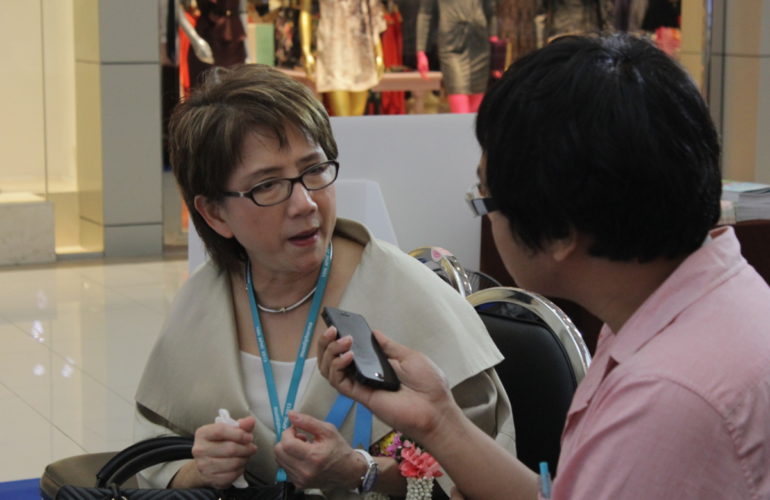 ehospice spoke to Associate Professor Dr Srivieng Pairojkul, president of the Society, and the driving force behind this huge positive change.

The Asia Pacific Hospice Conference is used as a focus of efforts to strengthen hospice and palliative care in a country that is ready to develop these services. The international interest that this event brings lends credibility to the discipline in the host country and allows for awareness-raising among the public and opens the door for discussions with the government.

Up until now palliative care in Thailand has been provided by a small number of dedicated individuals. Many centres around the country provide effective palliative services. Most of these are in medical schools. There are two centres that provide services to the whole hospital and will be developed to be training centres in 2014. In Dr Pairojkul’s hospital, she is the only doctor, and is supported by five nurses. “I cared for 700 patients last year,” she told ehospice.

Access to opioids is a problem in Thailand, in part due to issues with the trafficking of illicit drugs through the country. Professional education and awareness of palliative care also present challenges. Dr Pairojkul commented on this, saying: “We find that in Thailand most physicians are very aggressive with treatment even though they know the diseases are in advanced or end stage. We have a long way to go.

“Palliative care in Thailand is still in the beginning, still only isolated services, but I see that now more people are starting to have more interest, especially in the nursing profession,” commented Dr Pairojkul.

“When we planned for this conference we were quite concerned, as we had only a few palliative care specialists in Thailand, we thought that we would not have very many doctors joining the conference. But the National Health Security Office has sent delegates from their networks. I think that after they attend this conference, they will be more interested in palliative care.

This conference is a leading point for us to advocate among the professionals,” she continued.

It was the decision to hold the 10th Asia Pacific Hospice Conference in Bangkok, that led to the formation of the Thai Palliative Care Society.

Dr Pairojkul said: “We asked the Thai Health Promotion Foundation to support the conference. While they did not end up supporting the conference, we did get funding of 45 million Baht (almost $1.5 million) to develop palliative care in Thailand.”

The funding from the Thai Health Promotion Foundation will be used to support seven projects aimed at promoting and delivering palliative care in Thailand:

The ‘Before I die’ exhibition was launched in Bangkok on the opening day of the Asia Pacific Hospice Conference. The exhibition will travel to various sites around the country, engaging the public on the topic of death and dying and palliative care. This is part of an awareness-raising campaign comprising activities brochures, media, exhibitions and advertising.

Integration of palliative care into the existing public health system

The Thai Palliative Care Society is working on how to get palliative care included as part of the undergraduate medical curriculum.

Set up training centres in each region in Thailand

There will be two centres for palliative care training in 2014, and two more centres will be developed in 2015 to cover every region of Thailand.

International experts will travel to Thailand to conduct training for nurses in palliative care.

Developing training for caregivers and volunteers

Training programmes for caregivers and volunteers will be developed.

Dr Pairojkul noted that, while Thailand is very strong on the spiritual aspects of care, an important area for further training is the medical side of the discipline. As part of the projects supported by the Health Promotion Fund, The Thai Palliative Care Society has invited Dr Suresh Kumar, a pioneer of palliative care in India, as well as Kate Introna, who worked as a nurse in the Palliative Care Centre at St George’s hospital in Sydney, to assist with the training of nurses.

The conference provided a good catalyst for dialogue with the government. The Thai Minister of Health, Dr H. E. Pradit Sintavanarong, opened the conference with his wishes for the “fruitful achievement” in the future of the Thai Palliative Care Society.

983 delegates from 30 countries attended the conference, of whom 468 were international delegates. Dr Pairojkul expressed her hopes for the development of palliative care following the conference. She said: “This conference is like a spearhead, and I think we could stir up the interest of the people, from the professionals, to the public. Within the next three years with this project, palliative care can and will make a lot of progress.”