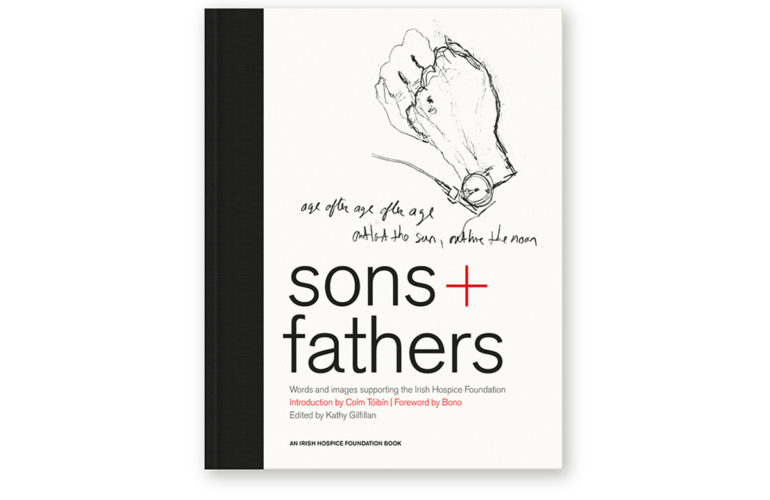 International writers, actors, artists, musicians, politicians and entrepreneurs make up the star studded cast contributing to Sons+Fathers which will be published later this year to coincide with Father’s Day.

The global book of words and images was inspired by U2 lead singer Bono who donated tender drawings he made of his father towards the end of his life. These formed the foundation of this remarkable anthology of personal contributions.

While the words and images are mainly of the fathers they are also revealing about the authors, their sons. There is a powerful introduction to the book from Irish writer Colm Tóibín.

Musicians include all of the members of U2, the bands former manager Paul McGuinness and his son Max, Paul McCartney, Bob Geldof, Julian Lennon and Gavin Friday.

From the political world there are contributions from President Clinton, Alastair Campbell and Bobby Shriver.

The book is edited by writer and editor, Kathy Gilfillan, a director of the Lilliput Press.

The Park Hyatt hotel brand supports the Sons + Fathers’ project as its major worldwide sponsor.  Hyatt has ordered 10,000 books to be placed in the guestrooms and suites of 34 Park Hyatt hotels around the world, including the newest additions Park Hyatt Vienna and Park Hyatt New York.

“When we were approached to support this book through Bono we jumped at the opportunity. It will provide our guests with a rare and intimate look into that special father and son relationship of some very well-known people, including one within our own Hyatt family,” said Katherine Melchior Ray, Vice President of Luxury Brands for Hyatt.

“The Park Hyatt brand was invited to contribute its own founding story by our Executive Chairman, Tom Pritzker. In the book, he shares the legacy left by his father and Park Hyatt founder, Jay Pritzker, who has inspired our brand through his business acumen and appreciation for art and will continue to serve as inspiration for years to come.”

Ardagh Group has sponsored the Irish printing of Sons+Fathers.

Irish Hospice Foundation CEO, Sharon Foley, said the book is a compelling mix of words and images from the world’s most famous men which explores the unique bond that exists between sons and fathers.

She said: “Bono planted the seed for this book with his generous gift of the drawing he made of his father when he was dying. He asked if they could be used to raise money for The Irish Hospice Foundation, so we decided on a book, and the net was cast wide and far. We were blown away by the response and generosity of the participants, all who are very busy, well-known people.”

The proceeds of the book will go towards The Irish Hospice Foundation’s Nurses for Night Care Programme, a service which provides over 1,400 nights of free nursing care at home annually to people with a non-malignant terminal illness.

Part of the proceeds will also go towards Hospice Africa Uganda founded by the inspirational 2014 Nobel Peace Prize nominee Dr Anne Merriman who did her medical training in Dublin.

Ms Foley said that the IHF believes everyone has the right to a good death and that includes access to excellent palliative care. She said, “It should be available to anyone with an incurable illness regardless of age and condition in a hospice, at home or a residential care setting. The proceeds from the book will help us in our mission.”

The book is being published by Penguin Random House and Hospice Press and will be available from the end of May internationally.