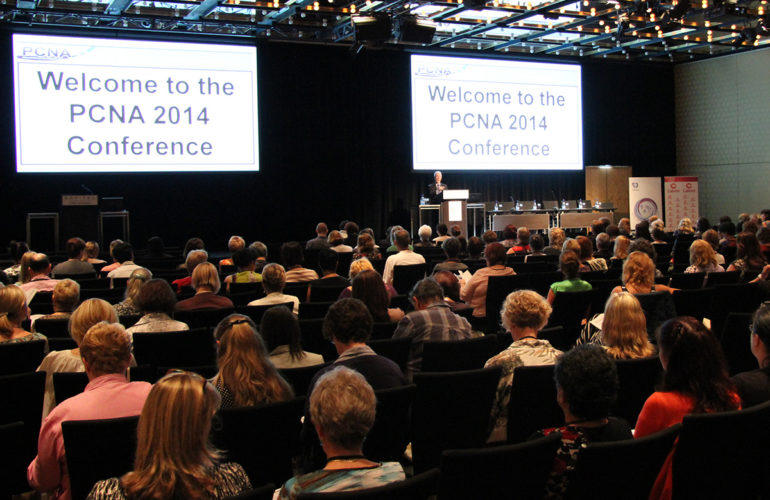 The conference focused on ‘Building a bridge to the future – the wide span of palliative care nursing’ and encompassed the concepts of ‘Populations’, ‘Partnerships’, ‘Practice’ and ‘Pillars – for best evidence based care’.

Professor Patricia Davidson, Dean of Nursing at Johns Hopkins University, was keynote speaker at the conference, and spoke about the challenges facing nursing in Australia as the population ages and disease trajectories become more complicated.

“The fastest growing population of Australians is centenarians and one in every three children that are born today will live to be 100,” said Professor Davidson. “I think it’s really important that we consider palliative care delivery in the broader social and economic factors that drive healthcare, as well as the physiological factors.”

Elizabeth Preston was awarded the Vivian Bullwinkel Award for Best Abstract at the conference. Presenting on the topic of bereavement support for people with an intellectual disability, Elizabeth spoke about how she had experienced first hand the lack of support given to people with an intellectual disability and their families when experiencing grief. While some research has been conducted overseas, Elizabeth took it upon herself to conduct Australia-based research in this area.

A number of conference speakers wrote articles for ehospice Australia about the research they were presenting at the conference:

Implementing a model of care for people with serious advanced illness
In this article, Naomi McGowan writes about the Calvary ‘4R’ Model for people in end of life care, which sets out four key steps for improving care:

Guiding care for vulnerable populations
In this article, Karen Glaetzer writes about how working in a collaborative arrangement with disability service providers has enabled palliative care services to pre-empt the likely scenarios that vulnerable populations may encounter during the end of life.

Following the conference, John Haberecht, President of Palliative Care Nurses Australia, commented: “I think there’s been a good buzz and atmosphere, people seem to be enjoying themselves. There’s a good spread of nurses from various backgrounds.

“With the [digital reporting] we had over 650 tweets and 110 participants and the audience reach was over 590,000. I think that’s been a great success and we have to keep going in that direction.”