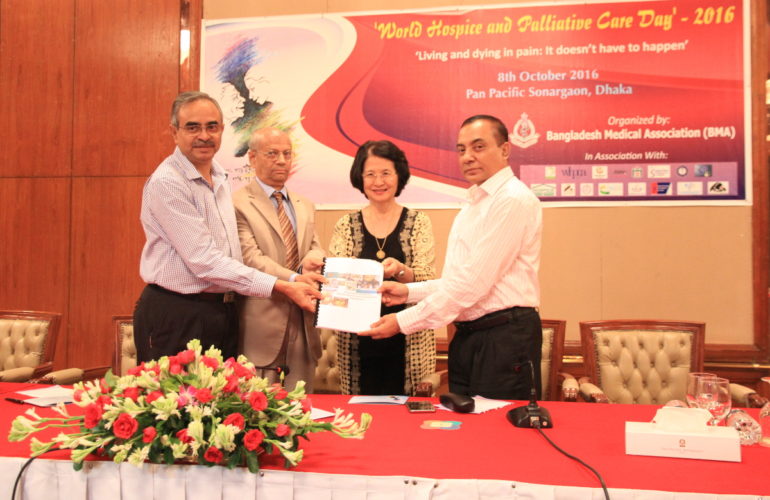 The event was organised by Bangladesh Medical Association in association with Centre for Palliative Care (CPC) at Bangabandhu Sheikh Mujib Medical University, Ashic Foundation, Hospice Bangladesh and other organisations.

The programme had a national focus, and the following aims:

VIPs present at the event included: Dr Cynthia Goh, Associate Professor and Senior Consultant of Department of Palliative Medicine, National Cancer Centre Singapore; the President and Secretary of Bangladesh Medical Association (BMA); the Director General of National Institute of Population Research and Training (NIPORT); and the Director General of Department of Narcotic Control (DNC) of Bangladesh were present for the event.

A Draft Working Report on ‘National Opioid Policy for Medical Uses in Bangladesh’ was handed over to the Director General of the DNC, who declared that his department would increase the supply of morphine for medical use by the end of October 2016.

Approximately 450 people were present in this celebration programme. The premier screening of the film: ‘Life Asked Death’ was the main attraction.

Organisers also arranged a poster presentation and photo gallery, which attracted many viewers.

The moment when I watched the film, I remembered some of those patients who came to CPC for pain management. Still now I remember one of my favourite patients, Abdullah, who was a 21 year old undergraduate student, admitted to CPC with severe pain.

He was initially diagnosed with sarcoma of left knee two years ago, but despite many treatments the cancer had spread.

Unfortunately the oncologist told him that there was no curative treatment options available and referred to him palliative care for pain management.

Many nights he could not sleep due to his pain, but within a few hours of admission his pain had dramatically reduced to three from nine in visual analogue pain scale when we gave him morphine. His mother was surprised and that night he slept pain free.

This film – ‘Life Asked Death’, which focused on patients suffering with pain and difficulty in morphine availability, accessibility and affordability – touched probably most of the people present in the audience.

There were many print and electronic media personnel present to cover the event. They highlighted the day in their newspapers, with headlines such as: ‘DNC to increase morphine supply for cancer patients’, ‘0.6 million people died without getting palliative treatment’, ‘Include palliative care to the National Health Policy’, ‘Pain free treatment prior to death is available in Bangabandhu Medical’, and others to that effect.