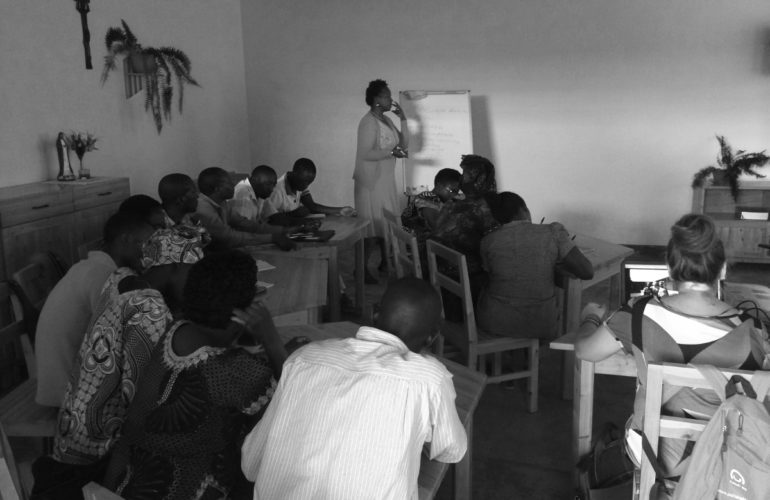 Habimana B.* was 10 years old when he came with his mom, Murekatete E. to a consultation at the palliative department at Kibagagbaga Hospital, of which I was the head, in 2014.

Both his eyes were literally out of their orbit due to a condition called exophthalmos, and the left eye was already blind.

His mom told us that Habimana had been experiencing this problem since last year and was not able to go to the district hospital due to financial issues.

She was also sad for Habimana because of the issues he had to deal with apart from the physical symptoms of his disease. He couldn’t play with other kids who are afraid with his face, which scared them.

The stigmatization of the disease was a really challenge to Habimana and his family.

Murekatete told us that in the neighborhood people suspected her son of witchcraft, because of his appearance. She also confided that she believed that Habimana had been poisoned by jealous people in the village.

Habimana and his mother were referred to our palliative care team at Kibagabaga Hospital by a community health worker. We received them and referred Habimana to our Ophthalmologist who did a fundus examination which pointed to a tumour with weakness of the ophthalmic muscles.

Our social service helped the family to reach the Ophthalmology Centre of Excellence in Kigali, where they decided to remove the blind left eye.

Habimana started a course of corticosteroid medications, and made an appointment with the oncologist for further investigation.

The need for community health workers in palliative care

His situation changed because of the willingness of a community health worker trained to identify patients in the community who need palliative care.

Mrs Mukamana, a community health worker located in a village in Gasabo District, had talked to Habimana’s mom about a programme started by the Rwanda Ministry of Health to help people with life-threatening illness.

She initiated a discussion on orientation and planning of care so that Habimana could benefit and reduce the stigma due to his disease.

We were happy to see that Mrs Mukamana explained to us that the training in palliative care had changed her attitude regard supporting vulnerable people.

“Before the training we didn’t know how to help them – even who to help – but now I’m confident that I can identify patients, support families and give information,” she said.

In Rwanda, community health workers are playing an important role in primary health care delivery, particularly to reduce maternal and child mortality, and rates of malaria and TB.

In most low and middle income countries, the shortage of health providers is challenging and impacts on the quality of care the population receives (Condo J. et Al, 2014).

One of the challenges we had when we discharged a patient in the community is to get feedback from them and how to process a management plan without inconveniencing or frustrating the patient.

The palliative care team were concerned, as even if a patient agreed to be discharged, there was no way of knowing what would happen to them in the community. We had no feasible way of following up. It was a dilemma.

In 2014, I attended the multi-professional week and clinical placement at St. Christopher’s Hospice in London, UK. I was captured by the tremendous role of volunteers in that setting and was convinced that we could draw on the strengths of volunteers to help us in Rwanda.

Investigating the role of community health workers in palliative care

Kibagabaga Hospital is located in Gasabo district, one of the three districts in Kigali city with a catchment area of 60% of total population of Kigali, with 481 villages.

We knew that all the community health workers selected were already part of other programs, so we specified their role to avoid burden in their routine activities. This included:

We conducted a one-day training per group of 20 community health workers over two months based on the concept of palliative care, pain assessment and symptoms.

Three months after the training, the result was terrific, the community health workers had identified 432 patients they thought could be part of the program, and had supported patients and families at different levels.

The second step was to do a triage of patients eligible for our program from the community by health providers trained in palliative care.

At the hospital level, most of the patients diagnosed with life-limiting illness had agreed to be discharged at home for continuing care, after we explained to them the role of palliative care-trained community health workers.

Community health workers demonstrated a strong commitment to help patients and families in the community and reduced the flow of patients to the district hospital.

Lessons learnt from this experience

From this experience, we learned that community health workers should be an integral member of the palliative care multidisciplinary team as they had a huge positive impact on the lives of people accessing care and their families.

Health providers, people accessing care and their families agreed that a person trained in the community as source of information and/or orientation reduces wasted time and unnecessary expenses.

The provision of palliative care is ‘everyone’s business’, and not just for heathcare professionals; some tasks should be shifted to volunteers to sustain the public health system.

Community health workers brought the humanity and dignity excepted by the patients and their families which is sometimes neglected by health providers during the management of serious illness.

Community health workers are a valuable human resource in health especially in low and middle-income countries.

To assure the sustainability of palliative care services, they should be fully integrated into the public health system and trained to support patients and families in the community.

It is feasible to integrate palliative care for people accessing care at the community level into public healthcare systems in Africa using community health workers.

*Pseudonyms are used throughout.

Dr Christian Ntizimira is a Palliative Care Educator at the National level in Rwanda.