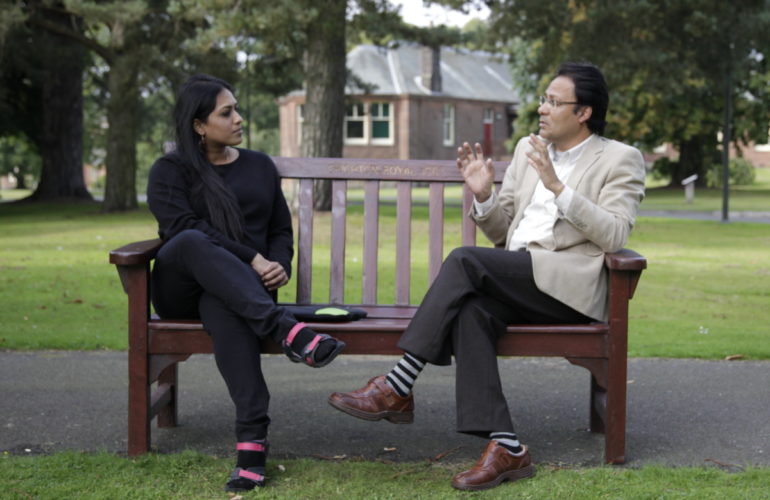 Dr Vijay, Assistant Professor at the Indian Institute of Management Calcutta, brings management expertise to her study of community organisation. Her research at the IIM includes patterns of community participation in palliative care in India. A particular focus at the moment is a palliative care project in West Bengal, where they are adopting the NNPC model.

Originally from Kerala, Devi trained as an electrical engineer and went on to study management. She completed her PhD thesis, ‘Collective Action Frame and Organizational Field Emergence in the Context of Palliative Care in Kerala, India’ at the Indian Institute of Management, Bangalore, in 2012. This was an empirical study that traces the interpretive processes that underpinned the evolution of the Keralan Neighbourhood Network in Palliative Care.

The Keralan model provides an example how a project emerges from the grassroots where common people play a vital role. As Devi is now involved in studying the Keralan model to West Bengal, I wanted to know what aspects of the model  have been transferred to West Bengal and what has been translated. During our conversation I ask Devi about the challenges of taking a concept from one context into another with a different sociocultural-political history.

In our study we are investigating the transfer and translation of a range of end of life interventions, across cultures and settings. One of these is the Neighbourhood Networks in Palliative Care (NNPC), which first began in Kerala, South India.

The Neighbourhood Network in Palliative care (NNPC) attempts to facilitate a sustainable, community-led service capable of providing palliative care to all those in need. The central premise of this model is that chronic and incurable diseases require a different approach to care when compared to acute illnesses, and it appreciates their enormous social cost.

From this perspective, chronic and incurable illnesses are seen as social problems with medical components. The model is inspired by the notion of primary health care outlined by the World Health Organization in the Declaration of Alma Ata in 1978 (PDF).

Behavioural scientist Dr Devi Vijay shares this interest and is currently working on the development of the NNPC in West Bengal. I took the opportunity to discuss the NNPC with her during a visit she made to the Glasgow End of Life Studies Group on the University of Glasgow’s Dumfries campus.

Listen to the conversation below, or on the End of Life Studies blog.