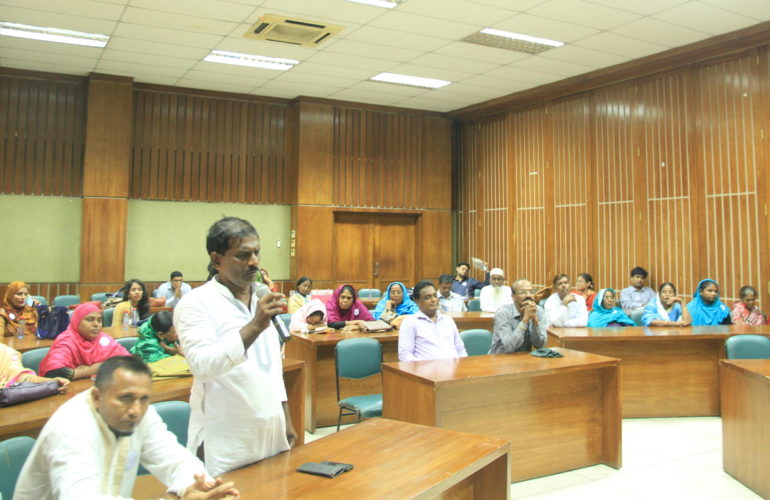 The meeting was oragnised by the Department of Palliative Medicine, Bangabandhu Sheikh Mujib Medical University (BSMMU), and supported by the Worldwide Hospice Palliative Care Alliance (WHPCA).

The project: ‘Compassionate Korail’ aimed at Improving quality of life of 100 older people in urban slum of Dhaka is jointly conducted by the WHPCA and Department of Palliative Medicine, Bangabandhu Sheikh Mujib Medical University (BSMMU). The project started in April, 2015 as a pilot and has been extended for two more years.

One of the main project objectives is to build a self-sustaining compassionate community-based palliative care model for older people who are suffering with life limiting conditions in the Korail slum of Metropolitan Dhaka.

56 participants were present for the meeting. 37 of these represented the Korail slum as leaders of different community based organisations. These community leaders belong to the Central Community Based Organization (CBO), Community Development Organization (CDO) and Urban Partnerships for Poverty Reduction (UPPR). Two students representing two youth organisations of the slum also participated.

In the workshop, discussion was based on the following themes

Participants discussed every theme in detail and formed two committees:

Throughout the day, the group came up with ideas on how to strengthen the self-sustaining community palliative care model.

Constitute a functional committee for CK

By consensus, a seven-member functional committee was formed for 2017-2018, including three members from the CPC, BSMMU and four members from the Korail Slum. This committee is responsible for the total management of CK for next two years.

Develop a fund for CK

Sustainable funding is critical for the future management of CK. The functional committee would take initiative for fundraising over the next two years. This fund will be used to assist patients facing financial hardship after two years. Participants present in the workshop gave many ideas by which we can make a fund for CK. These included:

The unanimous decision was made to open a joint account as the name of ‘Compassionate Korail’ to manage the project related fund. A committee has been formed for the management of the fund where Professor Nezamuddin Ahmad, Professor of Palliative Care at BSMMU, selected as Chair of the committee.

One place will be selected by community leaders for a permanent office to manage the entire medical and non-medical functions of the CK. This office will act as a training centre also for raising awareness regarding palliative care among the community people.

To develop a self-sustaining community palliative care model there is huge need to raise awareness about palliative care among the slum community as well as providing the services. Discussion with community leaders resulted in the following suggestions:

In the near future, we plan to draft and approve a policy to govern the ‘Compassionate Korail’ within three months, allocate five beds for palliative care patients in district level hospitals, and to establish ‘CK’ as a model centre to create similar centres in every district and sub-district of Bangladesh under the umbrella of ‘Compassionate Bangladesh’.