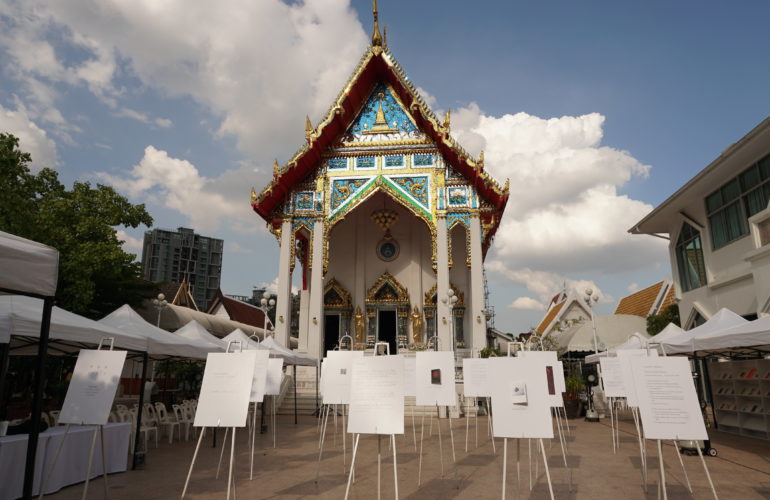 In Thailand, a writer has organised a ‘mock funeral’ public exhibition to encourage the public to think about and discuss death.

Dead Before Dying is a public event that encourages people to think about death. The artificial funeral rite was held at Sala Pichanon, Wat That Thong, Bangkok for 30 November – 2 December 2018 and a mock cremation was held at 4 pm on  the last day of the exhibition.

The event is a a collaboration between Peaceful Death and Roundfinger, local writer Sarawut Hengsawad.

During the event, Roundfinger shared his wishes for how his body should be handled after death, as well as the care he would choose in the final stages of life.

The event was intended not only to cherish the memory of the dead but also to spark conversations about death in Thai society.

The atmosphere at the event was one of tranquillity, but without sorrow. The writer’s 10 favourite songs were played, and 10 recommend books about death were displayed around a pavilion at the temple.

Roundfinger’s testaments were exhibited in the courtyard in front of the pavilion. These included how to arrange his possessions and body after he died, including a statement which expressed his love and thanks to his close friends and family.

Also on display was an “Advance Directive/Living will”, in the form of a light-hearted notebook. This document expressed Roundfinger’s wishes on how to arrange his body, along with details of his funeral rite.

The funeral rite took place in a dim room, with smoke spreading around the space. This gave the impression of a world after death in the human imagination, where souls wait for their last judgement.

A simple white coffin stood in the front of the room, without a memorial floral wreath or other ornaments for display. Roundfinger’s portrait was displayed above the coffin, with his dates of birth and ‘death’, along with the words: ‘There is nothing to worry about’.

Instead of flowers or a wreath, Roundfinger requested that guests bring a copy of a book that they most love. Following his funeral, these books would be donated to children and libraries together with the thousands of books that he collected throughout his life.

Four Buddhist monks, holding traditional fans, led a chant themed: ‘The beauty of impermanence’. The chanting began with a translation into the Thai language so that the audience could understand the meaning of the words.

Each of the attendees pressed their hands together at their chest as a sign of respect. The chairs were spaced wide apart to help the attendees to direct their concentration inward and to minimise distractions.

Afterwards the meditation and chanting, Roundfinger showed a short video clip including messages from people he respected.

After that, platform in front of coffin turned into a stage for speeches. Seven people shared their thoughts around death and dying.

Attendees were invited to lie in a replica coffin, and to close their eyes while dedicating around 20 minutes to the contemplation of death.

Certainly, this event encouraged conversations, but while there were people who agree, there were also those who disagree. Several people expressed the opinion that an event like this holds a serious subject such as death up to ridicule.

However, other people admired the exhibition as a good way to be aware of death before they are truly confronted with it, and that this reminds us of the meaning of life and that each moment is here and now for us to live.