Essential Pain Management in the Pacific 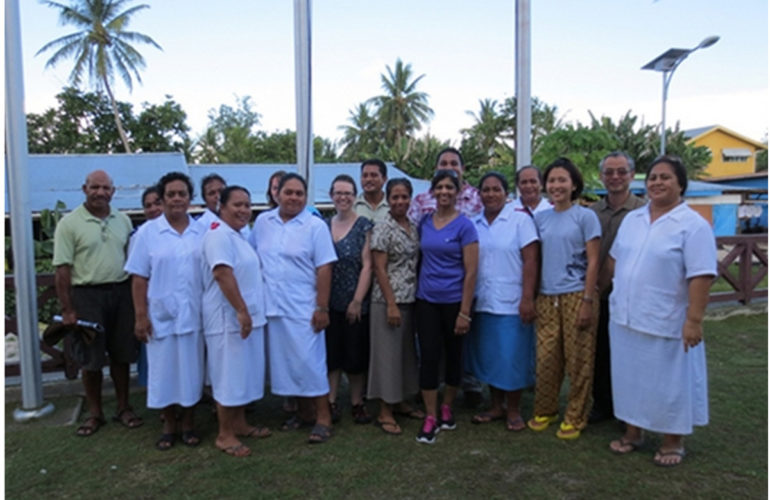 Essential Pain Management (EPM) workshops are being used widely in the Pacific to help address these issues. These have been developed to improve pain knowledge, to provide a simple framework for managing pain and to address pain management barriers. The workshops were created by Dr Roger Goucke and Dr Wayne Morriss and have been held worldwide now since April 2010.

The management framework we use is RAT, standing for Recognise, Assess and Treat. This has been used very successfully to discuss common and also more challenging pain management scenarios.

A team of pain management specialists from New Zealand travelled to Fiji and Tuvalu in October this year (funded by the PIP, RACS) to deliver a series of EPM workshops alongside local instructors. Over the course of 10 days, we ran four EPM Workshops and trained 69 people. The workshops were organised and run primarily using local instructors with three EPM instructor workshops held which trained 24 people in total who would then become instructors themselves.

The course structure and teaching materials worked well. The RAT approach to managing pain provided a simple framework for managing a variety of pain problems. A number of participants commented on the appropriateness of the teaching. Course participants contributed enthusiastically to discussions and came up with a number of ways of reducing pain management barriers.

An important part of EPM is early handover of teaching to local instructors and this seems to be happening in Fiji. The lead local instructors had prepared well for our visit. After discussion in Lautoka, it appears that as a result of EPM teaching, the administration of placebo (“American pethidine”) is no longer common practice.

One of the most passionate local instructors in Lautoka has now been promoted to Matron for Administration and she feels with her increasing numbers of local instructors she has the authority to run more workshops locally and organise development of policies, guidelines and audit.

In Fiji, oral morphine (including a slow release preparation) seems to be more widely available. Morphine is now used in preference to IM pethidine and regular paracetamol is also charted and administered routinely post operatively. There is commitment from FNU to introduce EPM for their medical students next year and the Matron for In-service Training in Suva attended all three workshops.

In Tuvalu, participants were interacted well with the tutors and each other. They found the RAT model useful, and seem eager to develop ways of improving healthcare for their community. They have already identified barriers to the provision of healthcare, and are working on ways of overcoming these – a series of workshops on supply issues (especially of medications) is already planned, and the team at the instructors course had already planned the next EPM course for the following Friday, when nurses from the outer islands can attend. The EPM workshop was attended by the Public Health Physician who formulated a well structured way to overcome the identified barriers under the headings of training and education, funding, human resources and system improvement.

It is proposed to return to Fiji in mid 2014 to support the local instructors to run more EPM and EPM Instructor workshops and also to run “EPM Lite” workshops for the Fiji National University (FNU) medical students. The healthcare professionals in Tuvalu are keen to have ongoing support and for a further visit in 2014 if possible.

EPM courses are run in many developing countries. If anyone is interested in being part of this initiative, please email Dr Linda Huggins.

This article was originally published on the Australia edition of ehospice. It is reprinted with permission.