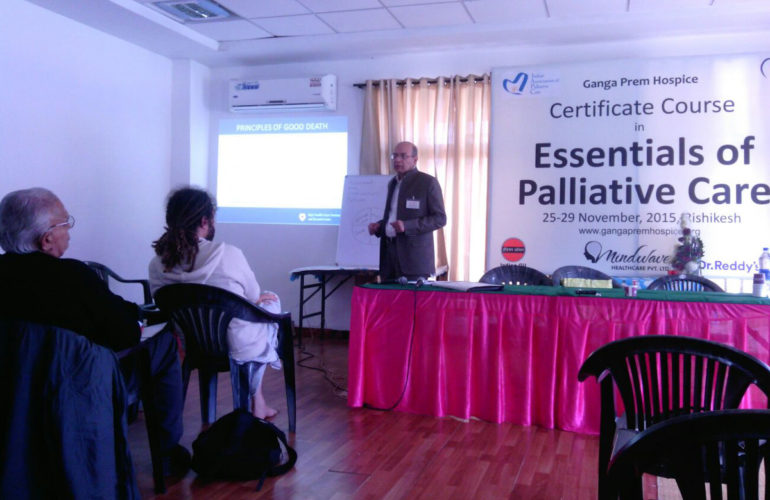 With much excitement, the team from GPH came together from around the globe to host the IAPC training course for the first time.

The event had a truly international flavour with trainers from the UK, Switzerland and New Zealand working alongside both local teachers and those from further afield in India.

In addition, participants were both locally based; Rishikesh and Dehradun, whilst some came from neighbouring states including Delhi, Ludhiana in the Punjab and Ambala, Harayana.

There were also participants from the UK, USA and Canada. Volunteers, both local and international, attended each day to provide assistance including interpreting from English into Hindi as required, and for the preparation and administrative tasks needed.

The event was planned one year previously. With support from the IAPC and sponsorship from local companies, the GPH team and local colleagues were able to share their knowledge and skills with professionals who were dedicated to improving their understanding and practice of palliative care.

Participants included doctors, nurses, dentists and an auyvedic practitioner, as well as a few non-professional supporters of the hospice who wished to increase their knowledge of the topic. The event was carried out at ‘The Art of Living’ Ashram overlooking the beautiful river Ganges.

Although the IAPC instructs that course be carried out in two and a half days, the team chose to follow guidance from Dr Ann Thyle, an experienced palliative care consultant and member of the IAPC National Faculty for the course, who recommends extending the length in order to ensure there is time for consolidating understanding and discussion. The course was therefore spread over five days.

Topics covered all domains of palliative care. Included was an introduction to the concept of palliative care by Dr Thyle, detailed presentations on pain management by Dr Mayank (Pain Specialist and Anaesthetist from Sri Mahant Hospital, Dehradun) and other symptom control lectures from Dr Thyle and Dr Ward (UK Consultant in Palliative Medicine).

A great emphasis was placed on the importance of communication skills which produced much discussion. The GPH trainers used demonstrations and role plays to demonstrate their teaching which was well received.

The subject of ethics in palliative care also provided a great deal of discussion. Respecting patient autonomy within a culture that usually prioritises family over individuality has challenges for the teams providing care. The challenge of withdrawing or withholding life-prolonging treatments in patients who are deemed to be dying was also debated.

In addition, the concept of euthanasia and the role of advance care planning (planning for future issues on health care at the end of life) were addressed.

The final day of the course provided true inspiration through the attendance of two patients who willingly shared their experiences. Both patients, in their early twenties, have had cancers for several years and have undergone a variety of treatments.

They were accompanied by Nani Ma, the hospice spiritual director, who gently interviewed each individual allowing them to discuss themselves, their experiences of the disease and treatments and the effects of their illness on their families.

They also expressed what gave them hope and meaning through their illness and what they thought health care professionals should be aware of. One of the patients attended with her parents who emotionally listened to their daughter talk so eloquently.

Following her talk, she played the guitar and sang for the audience. It was a truly moving experience for all. Both patients expressed their gratitude to GPH and emphasised the importance of the emotional support provided by them.

GPH doctor, Dr Aditi Chaturvedi, in her usual inspiring manner, having successfully recruited so many participants for the course, encouraged them to consider ways that each participant could take forward palliative care in their own place of work.

All the participants appeared inspired to address the situation. They were reminded that research shows that although there have been improvements, India continues to rank at one of the lowest positions in the world when examining quality of death; a sobering aspect indeed.

The whole group agreed on starting up a ‘WhatsApp’ group for those professionals interested in palliative care in North India in order to stay connected and to share information and inspiration.

They will all return together again early in 2016 to undertake the exam in the Essentials of Palliative Care training. Additionally, they will write a reflective study on a palliative care patient they have cared for.

The Ganga Prem Hospice team were delighted to have been able to provide this course and look forward to carrying out further courses in the coming years. With trainers and participants coming from around the world, the course provided a truly unique opportunity for sharing palliative care.