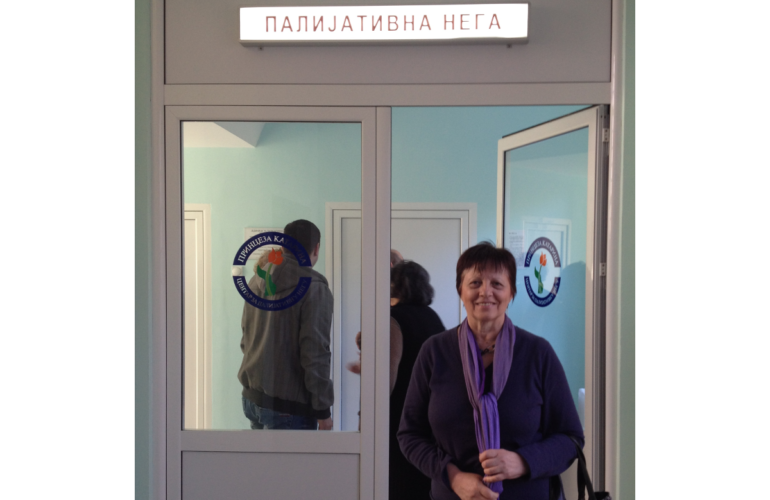 The launch, attended by around 200 people, was a milestone in the development of palliative care in Nisavski District. The recently opened palliative care unit in Knez Selo was funded through the Ministry of Health and the Princess Katarina Foundation, with support from Dr Elaine Laycock. The 13-bedded unit opened for patients last month. Dr Dusica Vasic, head of the PCU, and her team have been trained through the EU funded project on the Development of Palliative Care in the Republic of Serbia, and are receiving ongoing clinical support and mentorship.

In order to ensure continuity of care for the patients between the different levels of service delivery, local palliative care coordinating bodies (PCCBs) are being set up under the Health Committees to ensure effective local coordination of services, such that the patient is able to access care wherever it is most appropriate.

The first palliative care coordinating body was launched in Novi Becej on the 14 October 2013, with the second being launched in Sombor on the 17 December and the third in Nis on the 26 February 2014.

The launch of these coordinating bodies was a good opportunity to sensitise individuals to palliative care, models of service delivery, developments both internationally and nationally, as well as the specifics of what is happening with regards to palliative care in their regions and how the PCCBs will work.

The launches, funded through the EU project ‘The Development of Palliative Care in the Republic of Serbia’ were attended by high-level local officials, such as the City Major, the Hospital and Dom Zdravilja Directors, the local Institute for Public Health, and other key stakeholders. Prof Julia Downing, Team Leader, and Dr Natasa Milicevic, National Co-ordinator, for the Project attended the launches and took part in the proceedings.

Each of the events was covered by the local media, and it is hoped that as well as launching the PCCBs, these events will have contributed to the sensitisation of individuals about palliative care and the services that can be provided in Nis, Sombor and Novi Becej. As more palliative care units open up around the country, more PCCBs will help to coordinate care between the primary, secondary and tertiary levels of the Serbian healthcare system.

Following the launch of the PCCB in Nis, Dr Natasa Milicevic commented: “It has been a great occasion to sensitise people within the district on palliative care, and I hope that as people begin to have a greater understanding of how palliative care can help patients and their families, they will work together to ensure access to all in their district who need it.”

Author: Prof Julia Downing, Team Leader for the EU funded project 'Development of Palliative Care in the Republic of Serbia'