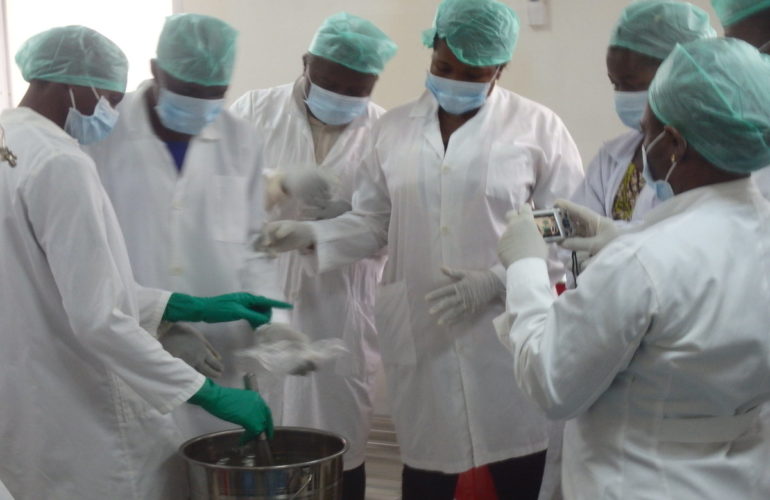 “I come from a poor country where health care is fully paid for by the patients,” says Dr Augustin Bambara, medical oncologist in the National Teaching Hospital of Ouagadougou, Burkina-Faso.

“As a medical oncologist I care for cancer patients. As they are diagnosed late, these are patients for whom we can no longer hope for any cure. They therefore come under palliative care.

“My suffering was growing greater and greater as I was powerless to bring them the relief they needed. This is why I applied to this course when I became aware of it, to acquire the competence to provide these patients with what they need.”

Dr Bambara was part of the fifteen health professionals on the Fourth Francophone Palliative Care Initiators’ Course, held from 27 to 29 May 2015 in Hospice Africa Uganda. The course gathered participants from Benin, Burkina-Faso, Burundi, Cameroon, DRC, Gabon, Ivory Coast and Mali.

The Francophone Palliative Care Initiators’ Course is organised annually by the NGO Hospice Africa Uganda, Department of International Programmes. The same course is also delivered in English once a year.

The NGO started palliative care in the country under the leadership of Prof Anne Merriman in 1993. Uganda is now ranked by the Worldwide Palliative Care Alliance and the World Health Organisation among the countries having the highest level of palliative care integration in the world, the only African country in this category.

“In Africa, most of the people living with cancer and other chronic and progressive diseases cannot be cured because of the lack of financial resources,” writes Timothé Vulin of Hospice Africa Uganda. “They are therefore condemned to suffer atrociously till their death, without even resources to get appropriate analgesics such as morphine.”

The five-week course responds to this huge public health challenge, sharing the clinical and educational knowledge and experience of Hospice Africa Uganda since 1993, in a resource-limited context.

For the two first weeks, participants of the course study pain control and psychosocial and spiritual support for people suffering from life-threatening diseases, children, adults and elderly. They also study the regulations, availability and the production of oral morphine in Africa. They also acquaint themselves with the philosophy that underpins the holistic care for the patients and their families. Finally, they are introduced to the concept of fundraising and to the setting-up of palliative care services.

From the third to the fourth week, participants are in clinical placement, in one of the three sites of Hospice Africa Uganda and another home-based palliative care service. They put into practice the knowledge and theories learned during the two first weeks.

“The management of patients at Hospice Africa Uganda will really change my own professional behaviours,” said Dr Angela Christie, from the Cancer Institute of Libreville in Gabon.

“My objectives have been largely reached. Not only on symptoms and pain control, but also on the holistic management of patients, especially on the spiritual, social and even economic aspects. I think this is what my country needs, and what my patients need,” says Dr Augustin Bambara.

A special delegation from Benin also came for one week to meet the main palliative care stakeholders in the Ugandan health system. The delegation included the head of the Internal Medicine Ward of the National Teaching Hospital and Focus Person for Cancer Prof Fabien Houngbe, the Chief Pharmacist of the National Teaching Hospital Dr Alfred Davakan, and the General Secretary of the main University of Sciences Alfred Djossou.

The delegation realised that palliative care is now well integrated within the health and education systems in Uganda. But they also recognised that these advances had started very small, at Hospice Africa Uganda, without initial money or political support. This experience gave them the confidence to facilitate the faster development of palliative care in their country.

The last week was dedicated to the training of future educators. Participants learned to identify the needs of their communities, to teach others and to lead efficient advocacy.

“As an oncologist surgeon, the mere notion of palliative care was something new for me…” said one participant in French, translated here in English. “During my clinical placement something happened that really, really struck me. I consulted a patient at home who had the same pathology that took away my own father – cancer of the pancreas.

“My father was in awful pain; I spent his last 32 days with him, while he was relentlessly screaming in pain. I was unable to do anything to relieve him, although I was a medical doctor. The strongest analgesics I had was Tramadol, which I was buying at 47km away from my father’s village. On the opposite, this lady’s pain was well controlled by oral morphine, and she could sit and was talking with us with humour before she died.”

The participants of the course were motivated and aware of the huge need of palliative care in their countries, especially in the rural areas and poor communities. They returned to their countries with an action plan, adjusted throughout the five weeks and enriched by the experience of Prof Anne Merriman, who met with every participant.

The course attracted the interest of professionals concerned by the common good. During the second week the Advocacy Officer of the International Association of Hospice and Palliative Care in Africa talked to the participants about the necessary access to morphine in palliative care.

The Apostolic Nuncio in Uganda came to greet the participants, and he blessed them as “seeds that are about to germinate and grow in your respective countries”.

The First Counsellor of the Burundi Embassy also came to the Official Closure Ceremony, witnessing “the importance of this task” and the “necessary courage” of the participants.

And Dr Aline Aguegue, Deputy Chief Pharmacist in the Benin National Teaching Hospital concluded her final interview saying, “Production of oral morphine and its availability mostly relies on me. I shall do whatever needs to be done.”

Prof Anne Merriman is a valued member of ecancermedicalscience’s Editorial Board. She was the Guest Editor for our acclaimed Special Issue on Palliative Care in Africa, which comprised original research articles from African healthcare professionals. In collaboration with Hospice Africa Uganda, ecancer produced a free palliative care e-learning course for healthcare professionals in Africa. Access the course here.

This article has been republished with permission from ecancermedicalscience.