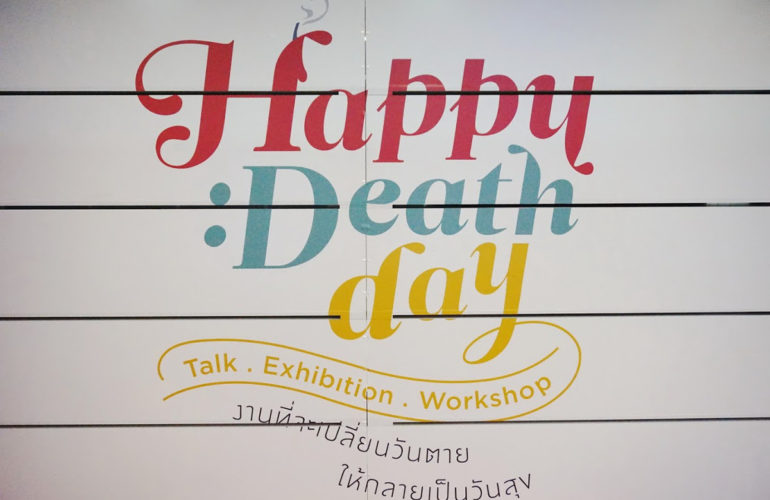 This two-day exhibition, a collaboration among more than thirty organisations, was held from 10 to 11 June 18 at Queen Sirikit National Convention Centre, Bangkok, Thailand.

The exhibition comprised of several zones with more than one hundred volunteers joining the cause.

Buddhist Abbot and palliative care advocate, Ven. Paisal Visalo, made an opening speech and discussed the main theme: Death, and how to prepare for it. After that, healthcare providers and carers who had to care for their loved ones until death joined the stage and discussed their experiences in the ‘Unspoken Truth’ session.

On the closing session of the first day, Ven. Paisal also publicly announced his living will: humble and simple, with minimal requirements, just like himself.

The ‘Last Talk’ session was dedicated to people diagnosed with terminal illness, they shared their stories to the audience: what they have been through, their feelings, hopes and dreams. Even those who were too frail to attend the event in person managed to send a video clip in their stead.

One girl who joined the session always writes her diary. When asked if her life were to end tomorrow, what would she write down, she replied: “The End.”

On the second day, the morning session started with panel discussion about common misconception about end of life care. The speakers, Dr Temsak Phungrassami, Professor Sawang Bunchalermvipat and Dr Sakon Singha discussed commonly misunderstood issues among healthcare providers and the general population such as opioids hastening death, or the belief that completing an advance directive would mean that the patients would be abandoned by the doctors.

The Death’s Design Art Exhibition, conceived by several volunteers, aimed to guide the participants through death’s journey at their own pace and with their own choice.

The exhibition started by asking the participants: Why are you afraid of death? After that, there were several sections showing related data: the top cause of death in Thailand, comparisons of funeral expenditure, choice of treatment and its consequences, concepts of palliative care, and voice clips from patients.

One section that was always heavily crowded was the coffin area. Participants could lie down inside the coffin, contemplating themselves, their life, their feelings, and death.

I also tried lying down inside as well and my impression was “it was smaller than I had thought!”

At the end of this area, there was a huge coffin decorated with paper flowers, commonly used in Thai funerals, near the exit, displaying a sign which noted: “Afraid or not, all men must die.”

Intended to have a light-hearted atmosphere, the Death Café is a safe space for those who are interested in death-related issues or palliative care to have a chance for a up close and personal talk with the experts.

There were three groups running all day long during the exhibition: speakers’ zone, patients’ and carers’ zone, and healthcare team zone.

In here, many dynamic questions arose and the discussion went on fruitfully because. Most of those who joined the café were in dire need of help.

For example, in my group, one participant shared his personal experience of caring for his wife who has now declared brain dead.

Not knowing about the concepts of palliative care beforehand, the family did everything to keep her alive: hooked into a ventilator, moved her to the best private hospital, etc.

And now, he reflected that all these interventions had not been in her best interest at all. The debts keep piling up and he had to take a regular three-hour drive to visit her at the hospital. He also remembered his wife’s wishes felt that he had not honoured them.

Another participant also shared her pain of caring alone for family member suffering from dementia. She felt lost, unprepared, and neglected. Fortunately, after hearing her story, we were able to give her the contact number of a hospital near her living area to provide her with crucial support.

Other tables at the Death Café were also very dynamic. Patients at the ‘Patients and Carers’ zone also shared their personal experience of how the illness changed their life.

In conclusion, the overwhelming number of participants and volunteers that joined this exhibition shows a good sign of the increasing interest in palliative care and death awareness in the general populationin Thailand.

With the support from the government and NGOs, palliative care will be more prosperous than ever.

You can find out more on Facebook and view the entire Happy Death Day image gallery on the ehospice international homepage.