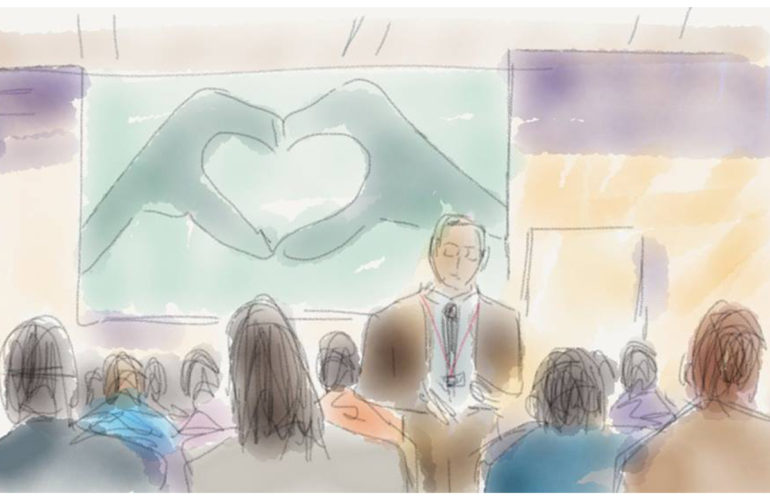 In his closing remarks on Friday, Dr Derek Willis, Chair of the 11th Palliative Care Congress, said that he hoped that the congress had made everyone think – and I would agree that the varied speakers did indeed make us think about palliative care in different ways.

There were too many interesting and inspirational people for me to write about them all – and, of course, I was not able to attend all sessions (I’m beginning to really dislike concurrent sessions). However, I’m going to mention a few of my highlights.

Thinking about death in different ways

One of the most fascinating speakers was Dr Nigel Warburton, a philosopher, writer and interviewer for Philosophy Bites podcast. Warburton provided a speedy introduction to how various philosophers have thought about death over the past 2,500 years.

For Socrates, “the unexamined life was not worth living”. He did not fear death as he believed it would either involve a dreamless sleep or an opportunity to meet all those who had died before him.

Epicurus tried to comfort those who feared death by explaining that when death comes “we no longer exist” and so we will not experience it. We didn’t think about or worry about the time before we existed, so why should we worry about our lack of existence after death?

David Hume also did not worry about death and being atheist he did not believe in a ‘hell’. He also disputed the religious arguments against suicide; for example, if suicide goes against the natural order, then so does healing.

Jean-Paul Sartre argued that who we are comes from within, and so this must end when our lives come to an end. When we die, we can no longer choose what makes us – others decide what we are after death and everything that you are and did is in the control of others.

Lastly, Warburton explained Simon Schaffer’s doomsday thought experiment: if the world was to end 30 days after our death, would we act differently? Many of our values are tied to the future of humanity, so it seems that we would live our lives differently if there were not future for humanity.

The use of narratives

Another speaker who left an impression on me was Professor Arthur Frank – but then I did go to all three of his sessions!

The idea of narratives and their uses were new to me but Frank’s sessions on narrative research and narrative-based ethics were both very well delivered and left attendees with clear understanding of the basics of these methods.

Frank explained how people experience their lives as an unfolding story, a story which is shaped by others’ stories. The stories we hear from other people also influence our sense of ‘rightness’ and ‘wrongness’.

Ethical conflicts can arise when there is a difference between two people’s idea of rightness and wrongness; they are essentially narrative conflicts. In a palliative care context – or any healthcare context – this could mean a patient (or family member) and a healthcare professional having a difference of opinion over which is the right course of treatment or intervention.

Resolving ethical conflicts using a narrative approach depends on both sides being able to articulate their own story, and be aware of the stories which have influenced their own story and their sense of right and wrong. They also need to be able to listen to and understand each others’ story and believe that it is ‘plausible’, even if they don’t agree.

Resolution comes from being able to identify common ground – fundamental values that are shared between stories – and being able to reshape individuals’ stories.

Frank concluded this session by commenting on the fact that in these situations, the stakes are generally much higher for patients/families than for professionals and it is important to remember the patient perspective and that they must live with the outcome for the rest of their lives.

Another session which impressed me was a masterclass on research within hospices and sponsored by Marie Curie.

Bill Noble explained that the charity had wanted to sponsor the masterclass as a major funder of palliative/end of life research and was keen to encourage more hospices to get involved in research (and not just its own hospices).

Dr Juliet Spiller, a consultant at the Marie Curie hospice in Edinburgh, explained the realities of what it means to be a hospice clinician and be involved in research at a hospice which is endeavouring to become more research-active.

The fact that Spiller spends much of her own personal time on research (because there are only 15 minutes a week allocated for this in her work plan) was a little depressing.

But it highlighted the fact that one of the key requirements for research engagement was dedicated time for staff (doctors, nurses and allied health professionals) to spend on research – including time for applying for funding and learning and development. There is also a need for “thinking time” away from clinical work, explained Spiller.

Spiller also spoke of the need for a big organisational shift so that a hospice’s leadership and staff see research as an essential element of what they do. Other key requirements she identified for hospices who want to become more research-active included a dedicated research lead, resources (for admin, data collection and data analysis), and links with collaborative networks and universities – the benefit of a joint hospice-university post was highlighted.

Interestingly, volunteers were also mentioned as being extremely useful in research; as were librarians and a supportive family.

Finally, I want to comment on how much I enjoyed the ‘question time’ style panel discussion held on the Thursday evening of the congress. The hour flew by, and I wish there had been time for more questions.

The panel – which included Warburton and Frank, along with Professor Julia Downing, Professor Irene Higginson and Professor Rob George – answered questions such as whether it is right for healthcare professionals to strike, what can we learn from palliative care in other countries, and does the ‘special’ in specialist palliative care prevent us from proving care to everyone who needs it?