Hospice and palliative care in Taiwan 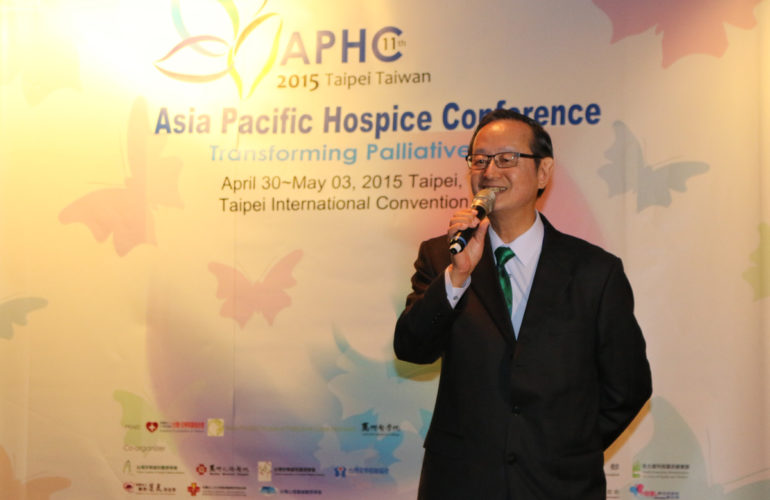 It was clear from the number and quality of posters and presentations from Taiwan, that hospice and palliative care has been developing steadily since the opening of the first hospice ward at MacKay Memorial Hospital in Taipei in 1990.

At the opening plenary, Professor Shu-Ti Chiou, Director-General of the Health Promotion Administration at the Taiwan Ministry of Health and Welfare, shared with the audience the progress that has been made in palliative care in Taiwan between 1990 and today, and outlined aspirations for the future.

Background to hospice and palliative care in Taiwan

Taiwan was ranked the 14th in the world in the Economist Quality of Death Index, the best rating in Asia. Taiwan aspires to Universal Health Coverage and hospice palliative care is seen as part of that. The core cost of service provision comes from the National Health Insurance in a very modest way. Small public donations support extra services, e.g.: art therapy, aromatherapy, clinical chaplain services or other activities for the patients and families.

In Taiwan, hospice and palliative care has been mainly focused on cancer patients, although in recent years, this has expanded to include other disease groups.

The provision of hospice and palliative care began in hospice wards in private religious hospitals, and today this is where most care is provided, although this has since expanded to include hospice shared-care, hospice home care services and community hospice services.

Shared-care is palliative care provided in oncology units in hospitals. The nationwide ‘Cancer Treatment Quality Assurance Project’, also led by the Health Promotion Administration, requires all hospitals in this project to provide “at least hospice shared-care” in the hospital, if there is no dedicated hospice ward or home care service in that hospital.

Four essential key players in the development of hospice palliative care in Taiwan were identified as: the government, NGOs, academic institutions and the national health insurance scheme.

Palliative care for children is not well developed, and representatives of the Taiwan Hospice Foundation have acknowledged a need for training in this area.

In 2000, Taiwan published the Hospice Palliative Care Act, which was the first Natural Death Act in Asia. The act enshrined patients’ right to choose hospice and palliative care, as well as establishing their right to sign a ‘Do Not Resuscitate’ (DNR) order.

The act was first amended in 2002 to allow for the withdrawal of life sustaining devices for terminally ill patients if predetermined in an advance care plan.

The second amendment, in 2011, allowed for the withdrawal of life sustaining devices for terminally ill patients if all family members agree and if the decision is approved by an ethics committee.

The third amendment, in 2013, allowed the withdrawal of these measures if at least one family member agreed.

National Health Insurance (NHI) subsidised hospice homecare (starting with cancer in 1996) and an inpatient care system (initiated for cancer in 2000, and motor neuron disease in 2003).

The Taiwan Academy of Hospice Palliative Medicine began a nationwide and official accreditation for hospice services in 2000.

Barriers to accessing hospice and palliative care in Taiwan include:

In his presentation on the second day of the APHC conference, Professor Rong-Chi Chen, President of the Lotus Hospice Care Foundation, noted that, when unavoidable, the death of a patient is not a medical failure, however, not facilitating as peaceful and dignified demise as possible should be seen as such.

He also spoke about persuading the general public that filial responsibility should find its expression in being with the parent and encouraging acceptance of disease and peaceful passing, rather than insisting on heroic and futile measures, such as CPR, at the end of life.

Hospice and palliative care services in Taiwan have increased from one ward in 1990 to 53 inpatient hospice wards with 718 beds and 126 shared-care teams in 2015.

Improvement in the palliative care utilization rate for cancer patients during the year before their death has increased from 7% in 2000 to 59% currently.

There are 69 home care teams in Taiwan and building up home care services is one of the main challenges.

The Hospice Foundation of Taiwan and Taiwan Hospice Organization represent hospice services and professionals such as physicians, nurses, social workers and other hospice and palliative care professionals.

There are many dedicated hospice volunteers in Taiwan, and efforts are underway to bring these together to form an association.

Main successes of the Hospice Foundation of Taiwan

According to the leadership, the greatest success of the Foundation has been their work in educating the public, as well as advocacy directed at other health care providers.

A second great success has been the Hospice Palliative Care Center at MacKay Memorial Hospital, which the Foundation supports. This was the first site for providing hospice and palliative care in Taiwan and nowadays people from throughout the Asia Pacific region travel to this institution to receive training in palliative care.

A new service being developed by the Public Health Department, New Taipei City Government, since 2013 is a community care programme. This includes providing early palliative care in outpatient clinics, as well as home care visits by regional hospitals’ doctors and registered nurses. The service aims to introduce palliative care in primary care settings.

Seven of Taiwan’s hospitals are participating in this programme, as well as 105 local medical clinics. There have been 671 patients enrolled so far.

The participating community physicians get 13 hours of lectures and eight hours practical training in palliative care.

Place of care at the end of life

According to representatives of the Foundation, public opinion on where to be cared for at the end of life has shifted in the past 20 years. It used to be the case that similar proportions of people died in hospital, left the hospital to die at home when death was close, or died at home without hospitalization.

Now due to changes in society and industrialization 60-70% of people die in hospital, with these numbers being higher if those who die in nursing homes are included in the calculation.

Now, more than in the past, people are less able to care for their parents at home due to work demands, which contributes to the high proportion of people likely to die in hospital.

The Hospice Foundation of Taiwan aims to increase education and training for the general public, to promote education around DNR and advance care planning, and to enhance coverage of palliative care for non-cancer patients. This, they hope, will address the lack of awareness and knowledge among the general public and even among medical personnel regarding hospice and palliative care. The foundation also seeks to spearhead the efforts to create care models in the hospice community for “the new era.”

The Foundation maintains that every seriously ill patient deserves hospice and palliative care, it is a human right, and one that they are dedicated to help realise.