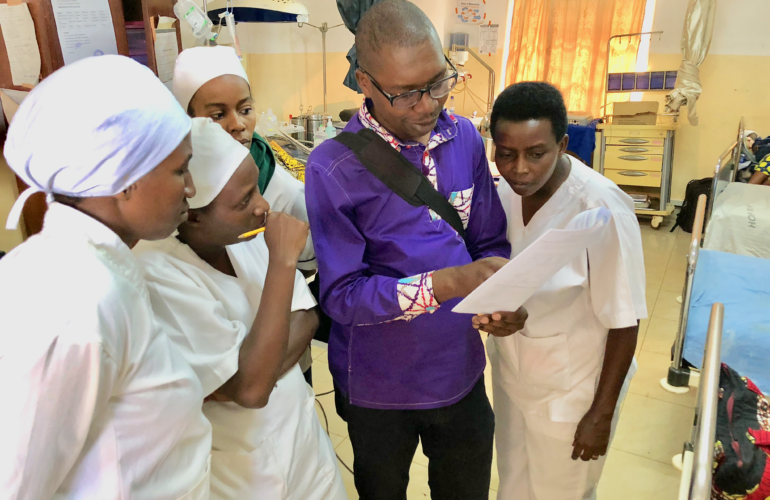 An innovative public-private partnership project in Rwanda has demonstrated lessons learned regarding the integration of palliative care within a country’s public health system. This project aimed to support gaps in the integration of the palliative care services within the national public health system, rather than to create a parallel system which could never substitute the government’s role.

It is important to support the government to achieve Universal Health Coverage (UHC) where patients will get access to palliative care services without financial hardship. Rwanda’s national scheme insurance called “Mutuelle de Sante” allows more than 95% of Rwandan citizens to get access to health care and to pay only 10% out of pocket, compare to the 90% reimbursed by the government.

Since morphine syrup has been produced locally, it is free to all palliative care patients who suffer with moderate and severe pain.

Context to the initiative

In 2011, Rwanda became the first African country to develop a stand-alone policy in palliative care, with both a strategic plan and an implementation plan for a four-year period. Since 2012, the MoH has used a public health approach to integrate palliative care services at different levels of the health system.

The project’s aim was to integrate and improve the quality of palliative care into the health system and in community care across Rwanda. This was accomplished by increasing awareness and knowledge on the access and use of opioids as a human right for patients in need, especially for those with life-limiting illness.

The one year collaborative initiative started on June 2018 was developed between the Ministry of health, the Rwanda Palliative Care and Hospice Organization (RPCHO) and was supported by the Open Society initiative for Eastern Africa (OSIEA).

Various trainings were conducted to increase awareness among physicians and other health care providers in the pain management of patients who suffer from moderate and severe pain. The Rwanda Ministry of Health committed to increase the accessibility and availability of opioids to treat pain and three major steps have been taken to reduce suffering, especially among cancer patients who are the most likely victims to suffer from pain.

The three major strategies have largely contributed to the integration of palliative care into the health system:

Since 2013, the Rwanda Biomedical Center, the implementor of the MoH’s policies, started to produce its own morphine syrup 5mg/5ml from powder bought abroad through the LABOPHAR, a local laboratory located in the Southern province. Previous data after the Rwandan genocide against the Tutsi has shown that Rwanda was using around 0,2kgs between 2007-2009 (Pain Policy Study Group, University of Wisconsin) which was insignificant.

Between 2013-2016, Rwanda’s quota increased over 3-fold from 800 to over 3,700 grams. In 2016, a steady supply and distribution persisted, with produced morphine shipped countrywide, 99% for cancer related-pain; 1% for post-operative and other pain management.

Task shifting reduces the burden of patients and family members in places where they have to travel for miles to receive medications. In this project, the number of days between prescriptions changed from 0 to 7 days to 7 to 28 days, which could help patients to stay longer at home and avoid traveling back to the health facilities every four days.

This transpired according to a law (30/2012 on 15/02/2012) in the governing of narcotics drugs, psychotropics substances and precursors in Rwanda mentioned in Article 17 for people authorized to prescribe narcotics drugs which cites: “…qualified midwife, nurse authorized to exercise the profession and within the limits established by the Ministry in charge of health”.

In the project, working with civil society institutions demonstrated strong synergy during the implementation phase between different health programs in Rwanda, especially at the community level. The government of Rwanda has increased collaboration with community health workers, and has addressed social determinants of behavior change.

The approaches used in this project were adapted based on the local context of each hospital and their training methodologies. Further, a communication network between the six hospitals and the RPCHO was established to develop continual communication at every step of the development of pain management interventions.

The main challenges in the project included a lack of provision for the requisition, prescription, or management of morphine and engaging different health program priorities of district hospital leaders and pharmacies.

At the end of the second monitoring in November, the results were breathtaking for most hospitals based on the indicators, cited as follows:

Since the efforts have been combined between the MoH/RBC and its partners, the total use of morphine has increased from nearly zero to 10 kg.

This experience in public-private partnership between the OSIEA, RPCHO and the Rwanda MoH demonstrated an important lesson in regards to the differentiated roles among different stakeholders in the integration of palliative care into nationwide public facilities.

Despite the limited resources, Rwanda is making palliative care accessible in the achievement of Universal Health Coverage and civil societies organizations are encouraged to support this effort through their expertise in the development of the health system.