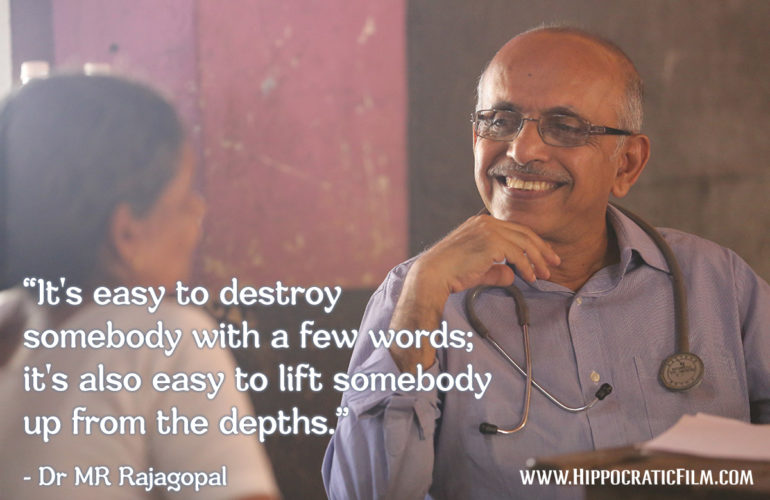 Dr Rajagopal is a small man with a big dream: a pain-free India. He has made it his life’s work to treat people experiencing high levels of pain and suffering from disease and trauma in his home state of Kerala, India, and far beyond.

In addition, he has focused on overcoming the barriers to the delivery of effective pain relief and humane end-of-life care.

Dr Raj’s work is not glamorous, and he is not in it for the fame. However finally, his extraordinary work and activism is being recognised. Later this month, Dr Raj will be awarded the Padma Shri – one of his country’s highest civilian honours –  by the President of India.

His nomination for the 2018 Nobel Peace Prize recognises that the impact of his work in reducing human suffering through the relief of pain is comparable to that achieved by the elimination of large military conflicts. In a country of 1.25 billion people, or one sixth of the world’s population, it’s easy to see why the impact of Dr Raj’s work has the potential to be enormous.

On top of these awards, Dr Raj’s life and work have been made into a documentary film – ‘Hippocratic: 18 experiments in Gently Shaking the World.’

Hippocratic reveals the challenges of delivering health care in low-resource settings, the tragedy of avoidable suffering, but also the opportunity and empowerment of delivering ethical, whole-person care through a grassroots movement.

Having recently been written up in the New York Times in an article titled “Palliative Care Film Challenges Stereotypes About Opioids,” Dr Raj is not resting on his laurels. Instead, he’s conducting a 16 city speaking tour alongside the release of the film Hippocratic in North America and Europe.

While the recognition Dr Raj has received may appear individual in nature, it also seeks to represent the global palliative care movement, of which we are all part. Some of us will recall the excitement we felt around Dr Anne Merriman’s Nobel Peace Prize nomination in 2014.

Can we allow ourselves for a moment, to dare to dream about the impact having a palliative care advocate awarded the Nobel Peace Prize would have on our collective efforts? It appears that now is indeed the time, to ensure we are all Gently Shaking the World.

Actions you can take:

This invitation is available to everyone, everywhere – simply email em@moonshine.agency to find out more.