Life in an informal settlement during COVID-19 – Rahima’s story 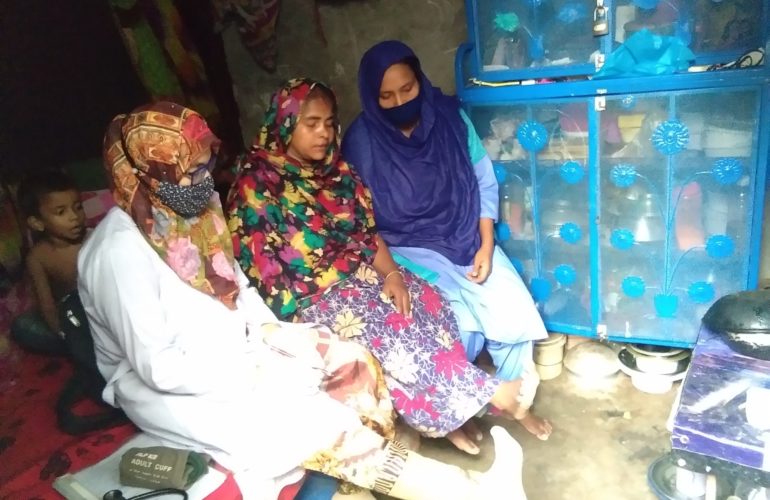 Rahima, a 40-year-old Bangladeshi woman endured a stroke five year ago and developed a right sided hemiplegia. 30 years ago Rahima moved from her mother village to Korail, to one of the largest informal settlements in Dhaka city. Before developing the hemiplegia, she was a housewife and lived with her husband and in laws. But after having a stroke they left her as they thought she would have no future. Her children were young, there was no one to help and life gradually became harder. Her brother, in spite of being a poor rickshaw puller, tried to help her as much as he could.

Since 2017, she has been supported with medicine and food packs from the ‘Compassionate Korail’* project. After some time, she was medically stable but unable to move. Then a Physiotherapist visited her and gave a proper guideline of therapy, but she was not interested in following the suggested exercises.  A Palliative Care Assistant then visited Rahima and explained some therapeutic exercises but again, she refused. The physiotherapist visited her once more and tried to console her. After several months of counselling she understood the importance of physiotherapy. She showed a marked improvement in daily activities by joining the treatment program. When she was able to stand and walk slowly, she went to beg around the informal settlement where she lived, trying to support the family with her meagre earnings. Her elder daughter worked as a domestic worker and son worked in a shop but these was insufficient to meet their daily expenses.

During the lockdown period because of COVID-19, life became harder. Rohima could not go outside to beg and her brother was also jobless. They starved for several days. The food pack and medicines provided by the ‘Compassionate Korail’ project helped them to survive.

The story of Rohima and her family highlight that palliative care is about supporting the whole person, not simply the illness and that is even more important in times of a global pandemic.

*‘Compassionate Korail’ is a community based palliative care project, run by The Centre for Palliative Care (CPC) at Bangabandhu Sheikh Mujib Medical University (BSMMU), Dhaka in collaboration with the Worldwide Hospice Palliative Care Alliance (WHPCA). The project has been supporting the palliative patients since 2015 and still continuing even throughout the COVID-19 pandemic.