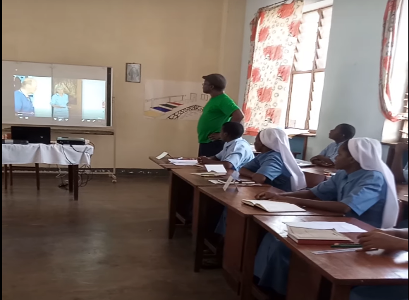 A set of five films, to help trainers around the world explain the key issues of palliative care, has been produced by the UK-based charity Palliative Care Works. They were launched at an online event in December and are now available through PCW’s own website www.palliativecareworks.org where a password can be obtained to give access via Vimeo.

The films are free to use and are accompanied by notes for trainers.

PCW focuses on supporting education and service development in Low and Middle Income Countries (LMIC) where health resources are limited.

PCW believes the films will meet a keenly-felt need. At the launch trustee Ruth Wooldridge said:

“Like many organisations PCW has been challenged by the Covid-19 pandemic. This has been particularly disappointing at a time of increased need in the countries where we’ve worked in the past. It was important to continue our work in palliative and end-of-life care but our model of face-to-face teaching was no longer possible.

“PCW applied to the Sir Halley Stewart Trust whose criteria of innovation in health care it closely matched. A grant of £5000 was given to make education films for LMI countries. These would complement the Palliative Care Toolkit and associated Trainer’s Manual and be a valuable resource for teachers”

A multi–professional working group was established comprising six trustees: nurses, a social worker, an administrator and doctors. They all had had experience of face-to-face teaching in LMIC and some members of the group had also used video and delivered some virtual teaching.

The group asked colleagues overseas to suggest topics they viewed as the priority for the films. As a result of these discussions the group decided that the topics for the films would be,

A member of the group added: “We hoped to illustrate common areas of importance to those unfamiliar with the concept of holistic palliative care and to respond to the priorities our overseas colleagues had described.”

The topics of the first four films are covered by short scripted plays with the individual parts taken by members of PCW. The fifth film is a conversation between two professionals (a nurse and a social worker) discussing talking to children. Each film illustrates three key learning points.

The first film shows a more experienced doctor and nurse discussing the care of a man approaching the end of his life with a ward doctor unfamiliar with the concept of palliative care.

In the second film an experienced doctor demonstrates an holistic assessment of a woman with advanced recurrent breast cancer.

The third film shows the same doctor discussing pain control with a colleague; common concerns about the use of morphine are considered. A follow up assessment by a phone call to the patient in film two completes the film.

The fourth film depicts a family conference led by a social worker at which the complex dynamics of the family of a dying woman are explored.

In the final film two professionals, a paediatric nurse and a social worker, talk about their experience of speaking to children about their own and family members’ serious illness.

Film 1 – What is palliative care 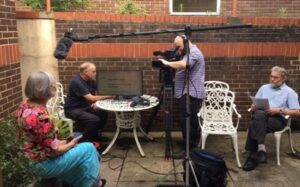 Ruth commented: “We hope the films will be accessed in many parts of the world so currently English is used throughout. The actors are members of the production group. In part this was a pragmatic decision influenced by the constraints of the pandemic and a tight timescale but also reflected the intended international audience.”

Once the filming was completed the group prepared guidance for teachers / facilitators linked to the Palliative Care Toolkit for resource limited health settings and the accompanying Trainer’s Manual. Ideally a film would be used within protected teaching time –at least one hour for each film was recommended, the film being shown through once and then again, with the teacher / facilitator stopping at certain points for group questions, discussion, group work or role play.

Colleagues from Ghana, Zambia and Tanzania have viewed and some have piloted the film scripts and notes for the teachers / facilitators, praising their relevance and usefulness. Positive feedback also came from Palestinian students of a Masters in Oncology and Palliative Care Nursing programme which used two of the films.

The films and written scripts, with suggested teaching points, are now freely available on the PCW website:

Cover Photo: Elvis Mtiti sharing one of the films during a training couese in Tanzania