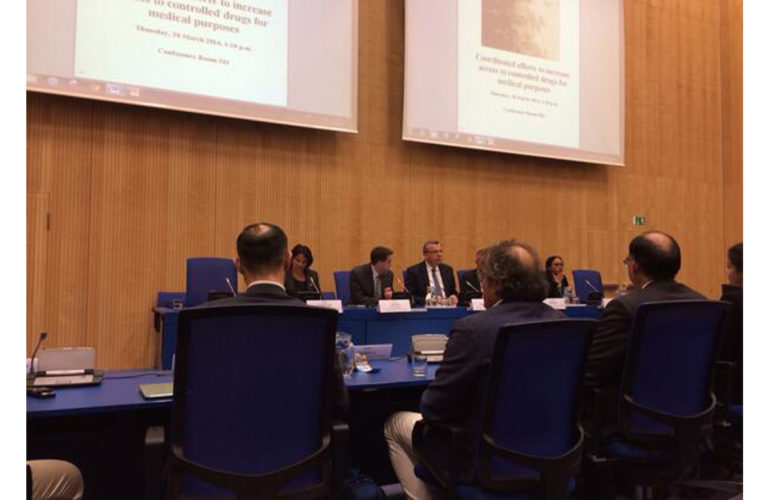 Advocacy is like farming. You plant seeds and it takes a long time for them to grow and eventually bear fruit. It takes many people to farm effectively. So it is with palliative care advocacy. Years ago palliative care advocates began to question why, when it came to international drug control, all the emphasis was on limiting access and virtually no attention was being paid to ensuring that essential medicines were available for medical use.

The ‘war on drugs’ has grown exponentially over the past decades, while over 80% of the world’s people do not have access to pain relief when they need it most. To change this situation requires that we change the mindset of a great many people that are deeply concerned with the misuse of medicines. Last week was the annual meeting of the UN’s Commission on Narcotic Drugs (CND). The CND is the global body that sets policy for how controlled substances are made available. Its mandate comes from UN treaties including the initial 1961 ‘Single Convention on Narcotic Drugs’.

The single convention called for access to controlled substances for medical and scientific use while preventing their misuse or illicit use; a balance between access and prevention of misuse. Over the decades this balance has seriously tilted toward a focus on misuse only. Palliative care advocates have been working to restore this balance so that essential medicines including morphine are readily available for treatment of pain.

In recent times, some of the seeds we had planted have begun to blossom. In addition to the CND, the UN’s Office on Drugs and Crime (UNODC) and International Narcotics Control Board (INCB) have begun to take note that there is a problem globally, especially in low and middle-income countries, with lack of access to pain relief. Language acknowledging this problem has shown up in policy documents and reports thanks to our efforts. Still, the use of morphine and other strong opioids remains very low in most of the world.

This week at the CND meeting, side events were held to highlight this problem and the head of the UNODC (Yuri Federov) agreed to speak in favor of improved access to medicines. The main focus of the CND has been in three areas: 1) supply reduction 2) demand reduction and 3) money laundering. Our main focus as palliative care advocates is to see that the CND includes access to controlled substances for medical use as a major area of focus in their strategic plan. We are working toward the upcoming 2016 UN General Assembly Special Session (UNGASS) on Drugs, to ensure that the CND’s strategy will be changed to include a major focus on access to medicines.

We spoke to many delegations from countries worldwide and no one seems to object to these changes once they realize the enormity of the problem. Most people simply do not know that it is nearly impossible to control pain with the current restrictions. We met with staff of the INCB to discuss ways they can encourage countries with low use of opioids to increase their use. We met with UNODC staff to begin to include measurement of access to medicines in their annual World Drug Report. What countries are required to measure, they pay attention to.

All this to say that instead of being absent from the corridors of international power, palliative care is now at the table and speaking up in concrete ways to help us overcome the barriers that we and the patients and families we care for face. We are looking forward to the WHO passing its first resolution calling for expansion and inclusion of palliative care this May and hopefully a major policy change for the CND in 2016. Spring is in the air.

Special thanks to Diederik Lohman (Human Rights Watch), Jim Cleary (PPSG) and Katherine Pettus (IAHPC) for their efforts this week at the CND.