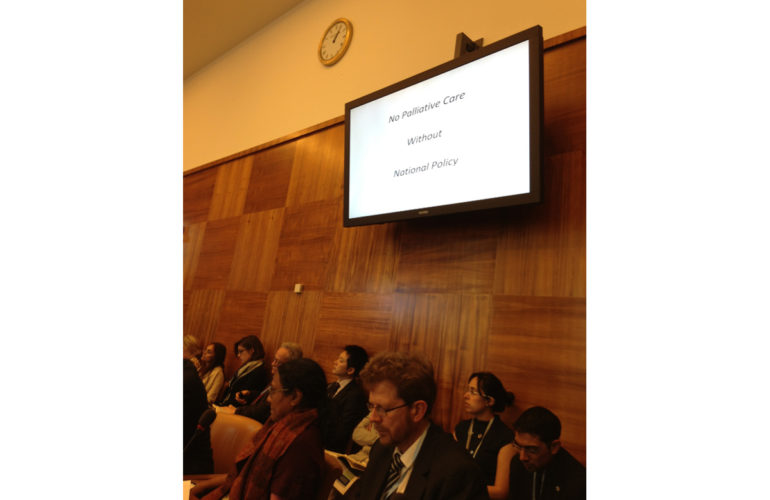 We will not know until later thisweek the final outcome of the report language but It appears clear that palliative care will stay in the document and real progress has been made.

A successful palliative care side event was held entitled: ‘Strengthening Palliative Care as a Component of Integrated Treatment Throughout the Life Course’. See this week’s ehospice for details on this successful event.

A meeting was held after the side event, with John Beard (WHO Aging & Life Course Director) and Cecilia Sepulveda (WHO Senior Advisor: Cancer) to discuss the drafting of a report on palliative care and a resolution to be considered by member states at the Executive Board meeting in January of 2014 for (hopeful), ratification at the 2014 WHA.

It was agreed work would begin on the report and draft resolution immediately with a first draft in June. A final draft of these documents must be ready by October. The passage of a stand-alone resolution calling on member states to develop palliative care is a major step forward for international palliative care development.

They were very pleased to see we are emphasizing universal coverage for our 2013 World Hospice and Palliative Care Day theme and want to collaborate with us. Work on the Universal Health Care (UHC) indicators is still going on and a global monitoring framework has been agreed. At the report out meeting opened by the Director General, strong support for UHC was expressed and WHO is asking for civil society assistance to help refine and develop the final concept for post 2015 implementation.