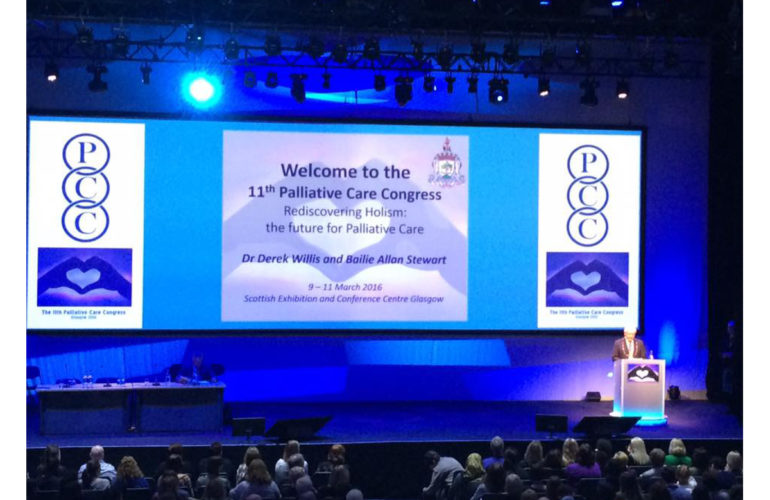 This morning Dr Derek Willis, chair of the 11th Palliative Care Congress, officially opened proceedings, with Bailie Allan Stewart from the Lord Provost’s Office welcoming attendees from around the globe to Glasgow.

Stewart said that he was delighted that the city was hosting the congress, praising the “special individuals” who work in the field of palliative care and the important and valued work of these individuals do.

Willis, who is sporting a rather fetching kilt today, commented that this is the most well attended congress ever, with attendees travelling from as far as New Zealand, and from the UAE and Saudi Arabia for the first time.

For those who arrived early enough yesterday (and were not delayed by flooding in the Rugby area), the congress had a slightly less traditional beginning – a performance of Music for Dogs. Apparently the play is “poignant … and bloody funny” – I, for one, am bloody disappointed I didn’t make it to Glasgow in time.

Global interventions at the end of life

I did, however, arrive in time to see Professor David Clark’s lecture about the project he is currently leading at the University of Glasgow on global interventions at the end of life.

The four-year project – which is supported by the Wellcome Trust – launched in March last year, and Clark explained how the project has developed over the last year and what he and his team are currently working on.

Clark defines ‘interventions’ as ‘organised responses to end of life issues’ and the team are studying a number of such responses, whether they are effective and how they can or could be transferred and translated to other parts of the world.

He explained how he has had to drop his initial idea to catalogue all end of life interventions from around the globe – apparently there are just too many! However, the team are currently focusing on a selection of interventions, compiling a series of case studies and ‘concept’ papers.

One key part of the work is public engagement – which has been part of the project from the beginning with the appointment of a public engagement officer. The team have a blog and social media presence (@EndofLifeStudy), and are always looking for new ways to engage different groups in discussions on the subject of end of life – including through a death campfire at a recent festival.

Following the official congress launch this morning was the first plenary, given by Professor Arthur W Frank, emeritus professor at the University of Calgary, Canada.

Frank’s lecture focused on the use of narratives in palliative care, and, as you would expect, he used two personal stories to illustrate his lecture – one from a research interview and one from his own experience, the death of his mother.

He explained how, although we talk about an individual’s experience and story as being unique to them, there are actually a set number of narratives – or templates – onto which these stories fit.

Referring to his research to date, and in particular his book The Wounded Storyteller, he briefly described the three “culturally preferred narratives” of illness and dying: restitution, chaos and quest. He explained how, in reality, most people who are ill/dying are living all three narratives every day, in varying proportions. He also emphasised how it was important for care givers to understand the patient’s story on that particular day, to listen and to be able to identify the honourable elements and risk within each narrative.

Frank reflected on how Cicely Saunders helped to create a new narrative, with new characters: she imagined doctors and nurses acting in different ways – for example, having time to sit with people who were dying – which would enable patients to become different kinds of characters within their stories.

The rest of the conference programme looks intriguing and inspiring, and I am already finding it difficult to choose between the concurrent sessions. But next up: lunch.

The full programme of the event is available on the Palliative Care Congress website.