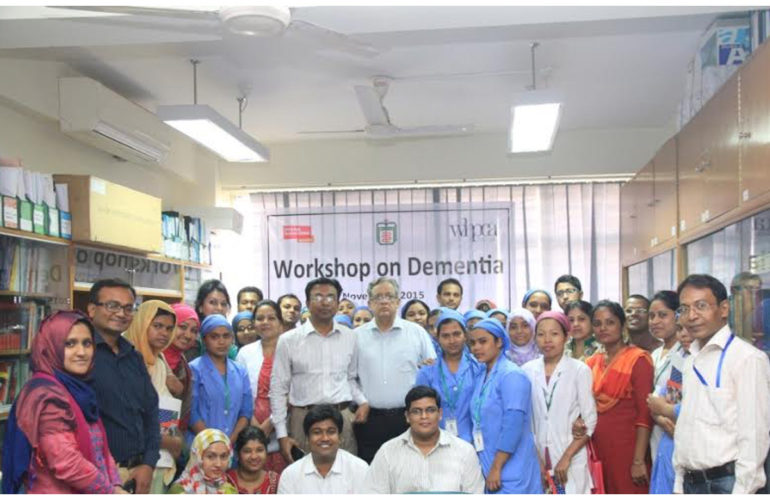 This was the first of a two-part series of workshops to raise awareness among the staff of CPC about dementia in Bangladesh. It was supported by the Worldwide Hospice Palliative Care Alliance (WHPCA), and took place at the CPC in Dhaka.

HelpAge International is a non-governmental organisation which works with older people to help improve their quality of life.

A team consisting of a Senior Policy Officer, a Consultant, Project Officer and a Capacity Building and Program Assistant came to train CPC staff about how to care for older people and people with dementia.

Dementia is a syndrome which is chronic or progressive in nature, where there is deterioration in cognitive function (i.e. the ability to process thought) beyond what might be expected from normal ageing.

In Bangladesh, dementia is the 10th most common non-communicable disease. Worldwide, dementia is one of the major causes of disability and dependency among older people. The number of older people is increasing and, as a result, dementia is an emerging issue in palliative care.

The aims of this workshop were: to increase awareness about dementia, to focus on the needs of older people, to examine what can we do for them, and to define the role of palliative care for people with dementia.

There were just under 40 participants, including doctors, nurses, pharmacists, social workers and palliative care assistants.

In the first session, presenters discussed the classification of ageing, basic ageing issues, initiatives for ageing at the national and global level, and the contributions of older people to society.

An interesting part of the first session was a role playing exercise where every participant played the role of an older person, with either hearing, visual or breathing problems.

After the role-play, I realized that older people can feel loneliness and helplessness in their life and that sometimes nobody listens to them.

In the second session, there was a presentation on: ‘Dementia linking with ageing and care giving (Home, Community and Social)’. Then we discussed what we can do and what next steps will be taken to help older people.

Locally, some initiatives for people with dementia have been started by the Bangladesh Dementia Action Alliance foundation (BDAAf).

After this training session, the palliative care providers at CPC realised that we also have to take responsibility for persons with dementia and support their quality of life, because dementia is an incurable disease.

The second part of this dementia awareness workshop will be held in December 2015.