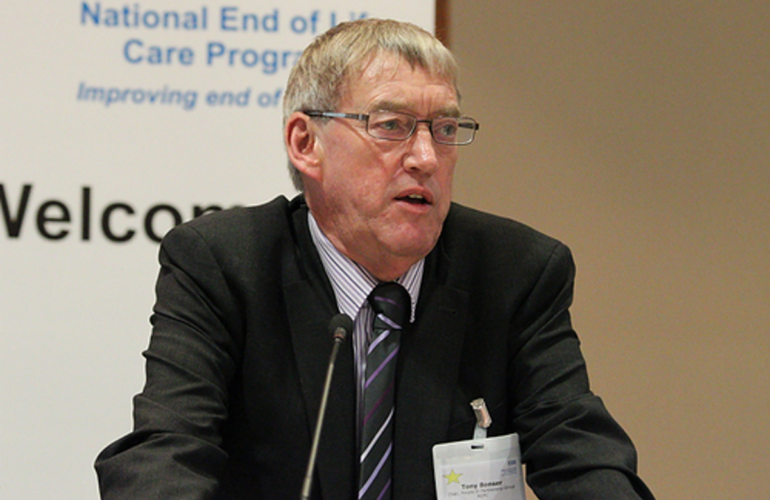 Could you tell be about the work that you do at the moment?

The reason I’m involved in this work is that that my son died from cancer 4 years ago. My wife and I had to fight our way through that. Then Macmillan Cancer Support invited people to write about their experience of caring for a person with a terminal illness.

The first time I had talked about my feelings about Neil was at the opening of a drop-in centre at St Joseph’s Hospice in London. After that I thought: ‘Why are we doing something with a hospice that is so far away? If we believe in hospices, which we do very much, we must get involved with the local hospices in our area’. So we volunteer transporting day care patients about one day a week to and from the day care service at a hospice near our home in Preston, Lancashire.

Reflecting on the experience of caring for my son, I saw the need to improve communications between medical professionals, the doctors and nurses, and service users. I’ve been invited to hospices to talk to staff, to train staff in communicating with the people who use their services.
I spoke recently at an event at Manchester United football ground; I was the motivational speaker at an event to raise funds for building a new hospice.

You also work closely with Dying Matters. Can you tell me about the work you do with that group?

Yes. Our agenda is very much to say that dying is not something to be hidden away. If you want to have the best possible death, you need to break down the social barriers around talking about death.

Talking about death is very important in working through grief and bereavement. I’ve found this in talking about Neil’s death.

In a recent survey, British Social Attitudes 30, they found that most people want to talk about death, but they don’t do so because they think they will offend other people. So it is important to give people permission to talk about death.

Somebody needs to say: ‘It’s alright to talk’.

Why is it so important for service users to be involved in decisions around hospice care?

I think there is a real change in the process of this happening between medical professionals and service users: patients, cares etc.

The NHS has paid lip service to the idea of patient involvement. I hope it will be more than that.

This points to a change of relationship from one of unequal power to: ‘Lets work together to find out what your concerns are’.

I’ve met people who are perfectly reconciled to the fact that they won’t live much longer. The doctors will aim to make patients live as long as possible, when what they actually want is to have their friends around them, to be able to socialise, to have the things that they need around them.

We also help medical professionals to see that dying is not a failure. To recognise that success is not always making people live longer, but actually it’s a success when people die well.

This is something that hospices do really well.

It is important that medical professionals turn decisions into conversations that the patient and family are party to, that they find out what are the comfort zone boundaries, that patients know that they are where they want to be with the people that they want around them.

What barriers exist to this involvement?

The first one is a big one. There is a social barrier that says: ‘We don’t talk about dying’.

You see this with hospices: People are very happy to raise funds for hospice, but they won’t get involved, because that is the place that people go to die. I want people to get involved so they can see that hospices are places where people go to live.

A local hospice near where we are is creating a drop-in centre with a café, counselling rooms, alternative therapy and relaxation facilities. The thing that I really want to happen is that the community feels that they have ownership of that. That they feel that they can go there to have a coffee, that they can take part in relaxation classes along with the hospice patients without thinking that it is strange to be around dying people. Because we are all dying in a way.

Also, we need to change the old idea that hospices are for cancer patients. Sometimes it is still quite difficult to persuade hospices that it is not just cancer that they need to provide care for.

I think that hospices are finding it difficult to reach ethnic minorities. I think that they are struggling to break out from their religious roots and their old concepts of spirituality.

Then there is the conception that hospices are like walled towers where you have to have some sort of admission criteria to get in.

I really think that one of the future developments will be that hospices will need to really get out into the community.

In what ways are service users becoming more involved in these decisions?

I think in a sense that it leads on from the debate around patient centredness. That the relationships become relationships of equality rather than coming from a power base of medical or spiritual professionals. In my personal experience, I found that the hospice was very protective of volunteers. They were concerned that we didn’t get too involved in case we couldn’t cope with the emotion of loss. Yet sometimes we are in a good position to facilitate important conversations. We were always told that when talking to people about deeply personal subjects, it is important to look them in the eye, to make eye contact. We’ve found that sometimes people need to NOT make eye contact in order to talk about these things. And when we are driving patients, we can’t make eye contact, because our eyes are on the road. We’ve helped people to work out their spiritual position, helped start advance directives.

Hospices need to get into a partnership frame of mind, and into a supportive relationship, instead of a relationship of us and them.

What could hospices do in the future to increase this involvement?

If you look at the demography, the death rate is going to rise in the next 15 years. Hospices don’t have the capacity for everyone to end their lives there. People are going to be dying in their homes or the homes of their relatives, but they are going to need the support that hospices provide. This is not only about pain management, but also about giving the right environment and a lot of the time it is just being there.

We’ve got to work out a way of transferring this into a home base. This is what the hospices do well. For the NHS, for hospital staff to do this will be very difficult. I personally think that the hospices will have to get into the community.

I’d just like to revisit one of the earlier questions that I asked about the barriers to service user involvement: One of the reasons why advocacy is so important in hospice and palliative care is that people who are dying are not able to speak for themselves, therefore others must speak for them. Do you agree with this statement?

Yes, I’ve been doing work with hospitals at the moment. Hospices do this better than hospitals do, but there is still a long way to go.

You will find that there is often a lot of resentment after someone has died, and one of the areas that this resentment focuses on is that things are done to people without discussion. For example, the decision not to attempt resuscitation. If there was a general and open discussion, with the doctors saying: ‘This could be painful and very damaging, but there is an alternative: We could allow you to be very peaceful and pain-free, and allow you to go away in a peaceful way.’

There needs to be that communication.

There is a spiritual element to that as well. They feel as if they no longer have a valid place in the universe. Both the carer and their family feel as if they don’t have a role anymore. That, I think, is at the heart of the issue of lack of voice.

If we could create the time to give people a feeling of being in control, to be involved in decision making, that would make things so much better.

Tony Bonser will be the main speaker at an event held by Help the Hospices on the 23rd July in London, as part of the Commission into the Future of Hospice Care in the UK. The event aims to encourage people who have used hospices or end of life care to come and listen to how we think hospice care should change, and engage their participation in how they want it to change and what their suggestions would be.