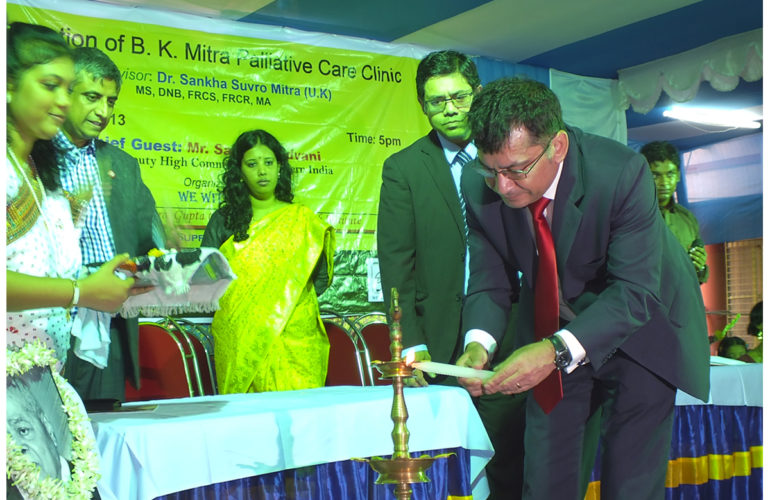 West Bengal covers an area 3/4 the size of England, and has a population of 91 million. As of 2008, the state had only a couple of outpatient clinics providing limited palliative care services.

Dr Mitra told ehospice: “I was initially concerned about the inequality and injustice of the lack of palliative care facilities in West Bengal that my Sussex patients take for granted.”

Dr Mitra had adopted the centre as part of a THET Health Partnership with Brighton & Sussex University Hospitals NHS Trust, his place of work in the UK.

Following this, the Indo-American Cancer Association (IACA), a charity made up of about 250 US-based oncologists of Indian origin, funded staff salaries to set up a palliative care department at Thakurpukur.

Between the start of this funding in 2009 and the end of 2010, the palliative care department had grown to employ 14 staff and was running an out-patient department, looking after inpatients and doing home visits.

The EIPC project started to build links with other palliative care organisations in India, developing partnerships with Pallium India and the Indian Association of Palliative Care.

In 2012, the Health Partnership received a DFID grant through THET to start a ‘Train the Trainers’ course in palliative care for doctors, nurses and social workers.

Following a needs assessment, the EIPC team organised a ‘Trainers identification workshop,’ resulting in the identification of 130 potential trainers out of 230 candidates.

The training commenced in January 2013. The hands-on programme with practical training, along with theoretical lectures was held at SGCCRI, Thakurpukur. Over 100 people have been trained on the course to date.

SGCCRI, Thakurpukur have recently constructed an Education & Training Centre and a new hospice building, as well as ‘Ashavori’, a residential home where nurses and social workers can stay and take their meals while they attend courses at the centre.

After the first cohort of students, it became clear that busy health and social care professionals were struggling to attend the full six week course, so the centre started to offer a 10 day Intensive course concurrently.

After the first batch of students had passed the course, EIPC started four free Community Palliative Care Clinics at Barrackpore, Dum Dum, Behala & Maheshtala, which were staffed by the doctors and social workers trained at Thakurpukur.

“We opened the UK charity ‘Eastern India Palliative Care’ (EIPC) to fund these clinics,” said Dr Mitra. “We also adopted ‘We With You,’ a community based charity in Kolkata which had a presence in 12 of the 18 districts of West Bengal.

“We made the first Bengali-language documentary about palliative care, and we shot it in our flat with family members and an unwritten script, with a budget of £100!”

We With You also started the first Bengali monthly magazine about cancer: ‘Karkatkranti’ or ‘Cancer Revolution’.

Dr Mitra said: “We have had very good feedback from the course, including increased confidence around prescribing morphine among doctors, and social workers report increased communication skills and a greater confidence in their ability to go on home visits to see very ill cancer patients. Patient satisfaction surveys of home visits were also excellent.” To date, about 1300 patients have benefitted from the free palliative care service.

The palliative care clinics have also improved cancer care and cancer services for the population, which was an unintended benefit and not seen in UK. This was because of a lack of organised cancer services in the community. EIPC & We With You are now collaborating with local NGO’s in the districts of West Bengal to take palliative care to the more remote districts. The organisation is currently looking for funding to expand the education and training into various government hospitals and to open Community Palliative Care Clinics in each of the 18 districts of West Bengal.

In an informal assessment of need, Dr Mitra estimated that West Bengal needs at least 100 palliative care clinics, as well as 10 Education and Training Centres like Thakurpukur in all the major teaching hospitals in West Bengal. To meet the need for palliative care, Dr Mitra estimates that these centres would have to train a total of at least 2000 doctors, 2000 nurses and about 4000 social workers to cover each primary health centre and to thinly cover the 40,000 villages in the State, with each worker looking after 10 villages.

EIPC plans to expand its programmes and increase its impact over the next five years and would gratefully accept support to expand this work further. Contract Dr Mitra to find out how you can help.