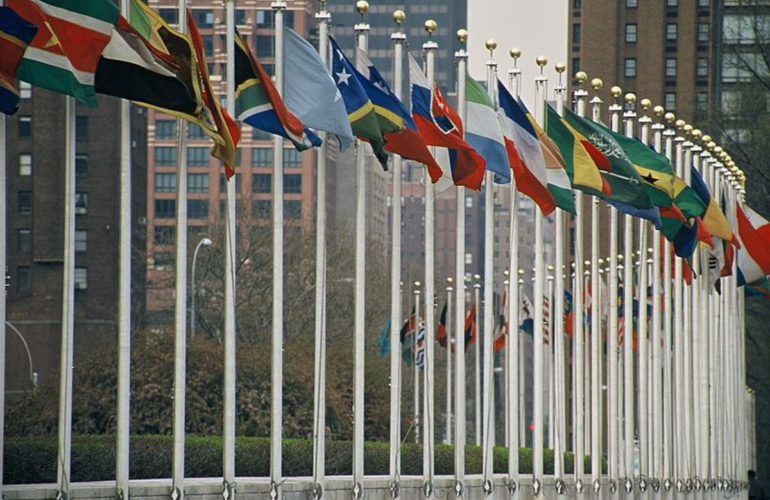 The panel was held on the margins of the 7th Session of the Open-Ended Working Group on Ageing (OEWGA), which was established by the UN General Assembly in 2010 to consider the existing international human rights framework, identify how older persons fall through the cracks of that framework, and discuss how best to remedy its defects, including by considering a binding framework such as a new international convention.

Concerned to ensure that UN member states recognise that older persons suffer from the lack of adequate palliative care services in their communities, the IAHPC has been attending the OEWGA for the past three years.

How States Can Respect, Protect, and Fulfil the Right of Older Persons to Palliative Care

This was the first side event devoted specifically to the topic, and featured a lineup of global palliative care and human rights leaders.

Speakers were Dr Stephen Connor, Executive Director of the WHPCA, Ms Maria Soledad Cisternas Reyes, Chair of the Committee on the Rights of Persons with Disabilities, Dr Diane Meier, Chair of the Center to Advance Palliative Care (CAPC), Mr Ivan Chanis, former President of the Working Group of the Organization of American States (OAS) Convention on the Rights of Older Persons, and Dr Sooyoun Han, Founder of Care Rights South Korea. I chaired the panel in my capacity as Advocacy Officer for IAHPC.

Global perspectives and palliative care as a human right

Dr Connor discussed the vast gap between the need for and provision of palliative care, presenting sobering graphs and statistics from the Global Atlas of Palliative Care at the End of Life.

His presentation concluded with encouraging news about how focused advocacy is stimulating the training of providers and the growth of new services in lower and middle income countries where need is the greatest.

“So we can link palliative care with to right to health in terms of Article 25 of Convention on the Rights of Persons with Disabilities, which requires medical support, medical assistance, training of hospital staff, treatment, medicines, and health insurance.”

Mr Chanis, an international and legal policy specialist from Panama, who led the Working Group on the Inter-American Convention on the Rights of Older Persons, described the process that led the framers of Convention to stipulate palliative care and access to controlled medicines for the relief of severe pain and symptoms as a right of older persons.

This historic treaty, ratified by Argentina, Chile, Costa Rica, and Uruguay, will enter into force next year and become the law of the land in the AMRO region.

This means that the Inter-American Commission on Human Rights will be able to receive cases and set standards for the provision of palliative care in the region. Mr Chanis said that the individual case system “will be a good strategy to implement this beautiful and progressive piece of legislation.”

How can palliative care improve the real lives of older persons

Dr Meier, a practicing geriatrician and palliative care physician at Mt. Sinai Hospital in New York, followed the legal and human rights perspective with a real time case study (of her patients, Mr and Mrs B) showing how palliative care improves the real lives of older persons faced with life limiting illness.

Mr B is an older gentleman with a dementia diagnosis whose wife, also in her eighties, is his primary caregiver.

The best practice palliative care and social support provided by the specialised home care service relieved Mr B’s severe physical pain and distress, and allowed the couple to resume attending church and other community events which brought them joy.

It also prevented further costly and traumatic trips to the emergency room. Dr Meier said: “It is so wonderful to hear about the work that is going on at the international level. It almost brings tears to my eyes.

“You feel so isolated in the clinical world confronting the very preventable suffering on the wards, even in wealthy New York City. Palliative care is the most important service for the population in the globe with the highest need, because they are the sickest.”

Dr Han, Founder of Care Rights in South Korea, gave the final presentation, identifying problems in elderly patients’ end of life care and decision making and describing measures being taken to remedy them.

Dr Han described how cultural ideas and expectations for family caregiving play a crucial role in the end of life care and decision making process, as many Asian countries consider these discussions taboo, instances of filial impiety even.

Korea recently promulgated the: ‘Act on Decision over Hospice Care, Palliative Care and Life-Prolonging Care for Dying Patients’ to remedy some of these deficits in patient autonomy and self determination, and Care Rights is educating communities about its provision.

Palliative care: an essential element of a convention on the rights of older persons

IAHPC made several interventions on the floor of the Open Ended Working Group, both in response to the Report of the Independent Expert on the Enjoyment of All Human Rights by Older Persons, and in the Interactive Dialogue with Civil Society.

The Chair of the OEWGA, Mr Mario Estreme of Argentina, acknowledged in his final remarks that palliative care would be an essential element of any international instrument, such as a convention on the rights of older persons.

The work resumes in the intersessional period between now and the next meeting in New York in July, 2017.

IAHPC will be collaborating with partners such as WHPCA to keep palliative care squarely in the sights of member states and develop it as a substantive element of the future convention.