The transformative power of palliative care: a report on the 11th Asia Pacific Hospice Conference 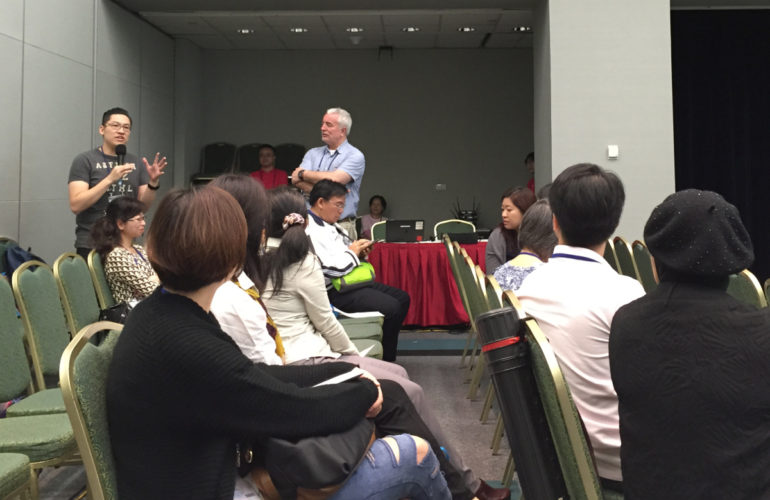 With a theme of ‘Transforming Palliative Care’, there was a particular focus at the conference on public health and the development of palliative care in countries where it is not yet well established.

It was wonderful to meet clinicians, policymakers, teachers and researchers from near and far – from China to the Philippines, Mongolia to Saudi Arabia, Argentina and the United Kingdom – to discuss shared problems and discover new ways of doing things!

The pre-conference workshops were a particular highlight for me. I had the great fortune to attend two of these: one on advocacy, hosted by David Praill (UK) and Steven Connor (US) from the Worldwide Hospice Palliative Care Alliance (WHPCA); and another on research, led by Patsy Yates and Susan Lee – both experienced Australian academics.

The workshops were a great way to learn: following a series of lectures, we formed small multi-national, multi-disciplinary groups and practiced applying our newly acquired knowledge and skills on issues and questions derived from our own day-to-day work. Other workshop focused on topics such as paediatrics, whole-person care, spirituality, communication skills, teaching and education.

Not surprisingly, this international conference featured a number of high-calibre keynote speakers, whose plenaries did not disappoint. Tom Hutchinson (Canada) spoke engagingly about whole-person care, particularly the need for all clinicians to practice mindful congruence in order to facilitate healing.

Baroness Ilora Finlay (UK) addressed the conference theme in her wide-ranging lecture: “Meeting the challenges by transforming palliative care,” which included a section on the challenges posed by euthanasia and physician-assisted death.

Stephen Connor updated the delegates on the advocacy work of the WHPCA, such as the recent adoption of a resolution on palliative care by the World Health Assembly, as well as the Global Atlas of Palliative Care at the End of Life, which was co-published by the World Health Organization.

Bee Wee (UK) took on the difficult task of trying to predict the “Challenges facing palliative care in the next 10 years,” while Patsy Yates shared her extensive experience and perspective on establishing an evidence base in palliative care nursing.

As is usual for meetings of this size and scope, numerous sessions were held concurrently (apart from plenaries), which meant one was usually spoilt for choice. The more popular talks were often packed to the rafters, while the quieter presentations allowed a more intimate exchange of ideas and experiences.

Of the sessions I attended, I particularly enjoyed Rosalie Shaw’s (Australia) reflections on her (ongoing) work in palliative care from its very beginning in our region. Ramaswamy Akhileswaran’s (Singapore) presentation on caring for caregivers, which featured lots of interesting ways of engaging the community was also excellent, as was Amy Chow’s (Hong Kong) comprehensive run-through of bereavement care. Tom Hutchinson’s recollection of his weekend with Virginia Satir; and Ilora Finlay’s musings on what it means to be a palliative care physician also resonated with me.

Like all great conferences, my first APHC experience continued after-hours with the world premiere of ‘Little Stars,’ a film on paediatric palliative care, commissioned by the International Children’s Palliative Care Network. I also enjoyed the relaxed welcome reception that encouraged the rekindling of old acquaintances and the forging of new ones and a hilarious gala dinner featuring impromptu performances from each country, lots of dancing and singing, and innumerable courses of delicious food and plenty to drink.

It has certainly opened my eyes to many aspects of palliative care that I had not thought of previously. While I feel reinvigorated to return to my clinical and research work, I am also determined to learn more about whole-person care and public health. I would encourage everyone interested in palliative care to attend the APHC 2017 conference in Singapore!