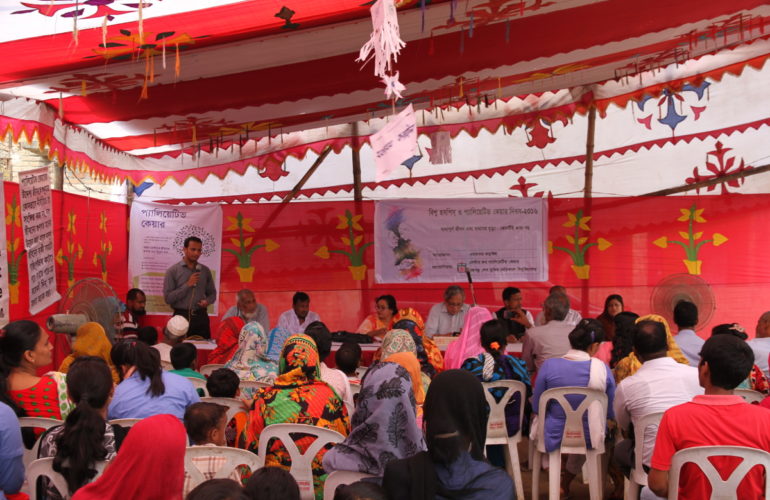 The initiative was planned and organised mainly by the Palliative Care Assistants (PCAs) and community palliative care workers of Korail slum, with the active support of the local Community Based Organisation (CBO) leaders.

The day-long event included an opinion sharing meeting in the morning between the stakeholders involved with the local palliative care programme, ‘Momotamoy Korail (Compassionate Korail)’.

Korail slum, the largest slum in Dhaka, Bangladesh’s capital city, provides shelter to approximately 150 000 people in an area of 83 acres in what project leaders have described as: “overwhelming poverty and suffering.”

A collaborative project, started in April 2015 in partnership between the Centre for Palliative Care (CPC) in Dhaka and the Worldwide Hospice Palliative Care Alliance (WHPCA), aims to “improve the quality of life of elder people in the urban slums of Bangladesh.”

The project’s one year pilot aimed at developing a sustainable community oriented programme to improve the quality of lives of 100 elderly people living in the slum through the training of community health workers, known as Palliative Care Assistants (PCAs), recruited from the community.

A satellite branch of CPC has been activated in Korail slum, offering home care service provided by the PCAs working under the supervision of qualified physicians and nurses.

The day event was attended by the general public and community members, members of the CBO, as well as other NGO workers along with the volunteers.

A number of elderly people who are the direct beneficiaries of the project were also present. Ms Selina Begum, the elected president of the CBO Committee, presided over the main discussion, followed by Mr Hassan, the Vice President of the committee. One PCA anchored the whole programme, supported by the project coordinator.

One of the patients expressed her satisfaction over the services she receives and told the audience how this service has changed her daily life.

One of the PCAs spoke on behalf of their team and explained why she feels proud to be associated with this programme and how care can be provided with very limited resources.

She praised the cordial support extended by the community and its contribution towards the success of the project, and hoped that their support would continue in future.

Prominent community leaders also spoke on the occasion, particularly emphasising the unique nature of the programme, and assured all possible support to take the programme forward.

Ms Begum gave an impassioned address, saying that: while that there are many other welfare programs running in the slum, this program is something so different. She told those listening that when she heard about the programme, it appeared that she had been looking for something like it for a long time.

She gave a few suggestions as how to incorporate more and more local people in the programme and how a sustainable impact can be generated in future.

Dr Nezamuddin Ahmad, Director of the CPC and project lead, thanked the PCAs and the CBOs for organising the event and highlighted the need of palliative care in the community.

He emphasised  how a meaningful programme can only be achieved with the participation of the community, and gave examples of a number of such community-owned program in other countries.

Examples were also given about the CBOs of Korail who run a number of community-owned schools, mosques, safe water and electricity provision to the slum dwellers.

He invited the community and other NGOs working in the slum to get actively involved to develop a strong community palliative care service in Korail slum.

Around 200 people from different professions attended the official event. The rest of the day was spent by visiting the patients, collecting small donations from the community and distributing leaflets.

It was a significant development, because for the first time World Hospice and Palliative Care Day was celebrated in a slum. However, the event was all the more significant as the initiative came from the community level with the support of community people.

While enquiring why the PCAs had felt the need to organise such an event, they noted that they had collected a small fund the previous year.

This year, while attending the main national celebration event organised by Bangladesh Medical association on 10 October,  along with the CBO President and the vice president as invited guests, they felt the need to organise such an event  in their own area.