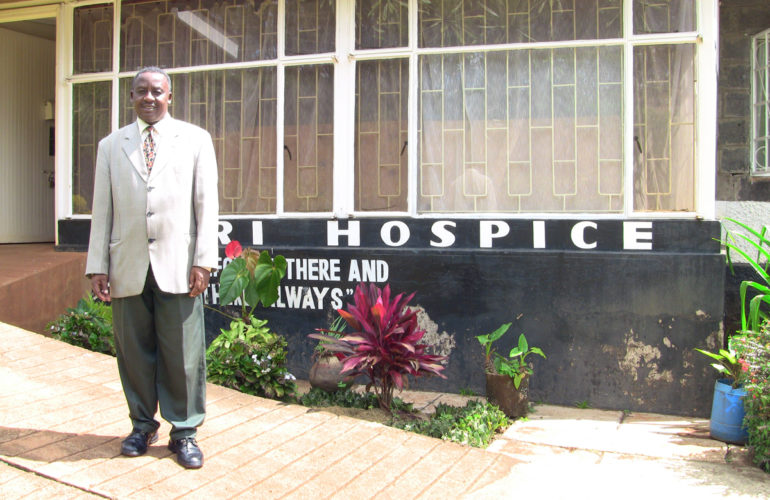 It wasn’t is until a family friend was affected by cancer that he recalled seeing the Nyeri Hospice signpost with the word cancer on it and he decided to step in and find out the services offered.

It was during this visit that his eyes were opened to the care patients with life threatening illnesses receive at hospice.

“I met a group of ladies I knew in pastoral mission holding a service that day. I previously saw them enter the compound but never knew what they did. I was ushered in and the service progressed normally with song and praise,” says Pastor Solomon.

When it came to prayer time Pastor Solomon was asked to lead. He initially didn’t want to interrupt them but since the request was made, he conducted the prayers.

He says that the day was a big one as students from Moi University had visited with lots of food and fruits. “I wondered how I could eat the patients’ food when it was served.” He adds.

The one person who encouraged him to eat was Johnson Githinji, the Hospice Social Worker who happened to come from the same area as the family friend.

“I was glad to learn that the affected family friend was already enrolled at Nyeri Hospice. I journeyed with her till she passed on.” He says.

He says the job that the Hospice was doing was noble but did not know if he could have a role to play in supporting those patients.

“One of the friends I met at the hospice conducting the service told me I could join them. I did not take it serious.” He says.

After a while of not visiting the hospice, he met with the social worker who asked him why he had not visited them again.

He explained that sometimes no one comes to conduct the service. “It then struck me that in such a situation; those patients needed someone to address their spiritual matters. I purposed to visit during the next day care. With my other colleagues, we formed a team and agreed to take turns in conducting the service at the Hospice,” says Pastor Solomon.

He says that with time, there came up a palliative care course for volunteers. “The Hospice Chief Executive Officer (CEO) Saraphina Gichohi asked me if I was willing to undertake the course which was paid for by a sponsor.” He adds.

His initial thoughts were that the course would lead to a permanent job at the hospice yet he was in church ministry. The CEO explained what it entailed and that after the training, he could do the work voluntarily.

“The training was quite informative and I learnt a lot. I committed myself to volunteer and be the one offering spiritual guidance to the patients during daycare. I subscribed to be a friend of the Hospice and partake in their activities,” says Pastor Solomon.

He says that when patients come, they are encouraged and he is glad that his work and that of his colleagues at the hospice is appreciated by the team and the patients.

“What these patients look forward to is comfort and the work of God is able to give this comfort. They have accepted the encouragement we give without consideration of their denominational background,” says Pastor Solomon.

He says that his wish in the near future, with expansion of the Hospice programs, is to have a resident chaplain to care for patients and be closer to them at all times and even visit them at home.