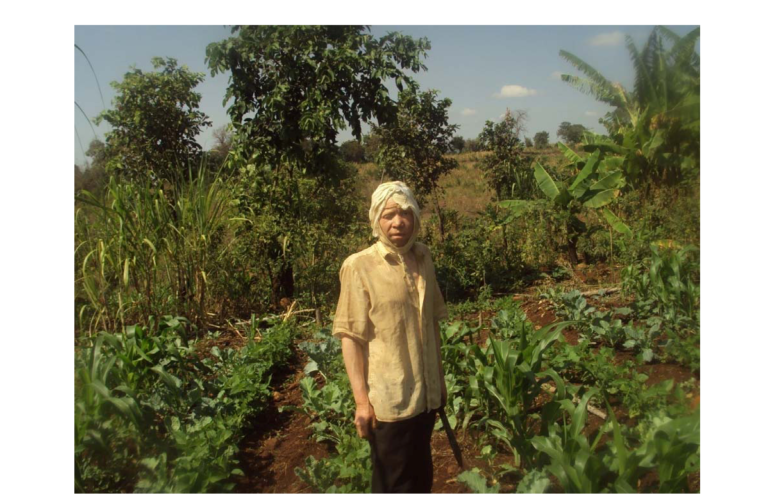 Mr. James Njagi is 47 years old and a father of six children. He is the sole bread winner hence all family members are wholly dependent on him. He is a person with albinism and because of this, he was rejected by the community including his own relatives.

Mr. Njagi’s skin condition makes him prone to cancer of the skin. Her spouse and children are supportive and love him so much despite the stigma and discrimination from the community.

None of his children is an albino. His children do casual jobs to earn a living and support their parents. In 2007 he developed wounds all over his body, some of which healed after treatment.

One of the wounds just below the ear persisted despite treatment and in 2008 he was admitted in hospital.

A biopsy was taken and the results showed that Mr. Njagi had Squamous Cell Carcinoma. He sought for treatment in various health institutions but healing was far from reach. By this time, he had developed a big wound with oozing pus and blood. The wound also had maggots which made him so uncomfortable.

One day as we (Chogoria Palliative Care Unit Team) were sensitizing the community on palliative care, one of his neighbors told us about him and we agreed to pay him a visit.

We discussed with him and his spouse about the diagnosis when we met and what we could do to them as a palliative care team. They appreciated our offer and Mr. Njagi was enrolled into our programme and he was happy.

He had never heard of palliative care before leading to his quiet suffering in severe pain. He drained all his resources trying to get cure but ended up with only analgesics which never relieved his pain fully.

Buying the analgesics was not easy and at times he stayed without, leading to even more suffering. All this time, with or without pain, he had to support his family. He used to burn charcoal and do casual building jobs to take care of the family.

We also provided him with high protein diet to boost his immunity. With this support, his life improved.

The current situation is not at its best due to lack of funds to support him. Mr. Njagi is currently admitted in the hospital due to anaemia caused by bleeding of the wound during dressing. He was recently admitted in the ward and transfused five units of blood. He was later discharged home after he recorded improvement.

We used to visit him regularly to monitor his progress and managed to train him on how to dress himself with the help of a mirror because his care giver had not gathered enough courage to do the dressing.

The wound is becoming bigger while our visits and medical supplies are becoming less by the day due to financial challenges yet this is the high time he needs our support at the most.

As we endeavor to provide the best care for Mr. Njagi and many more patients in need of palliative care, our hope is that these services will reach these patients wherever they are and at an affordable cost so that we can alleviate pain and other distressing symptoms from all patient with life threatening illnesses.