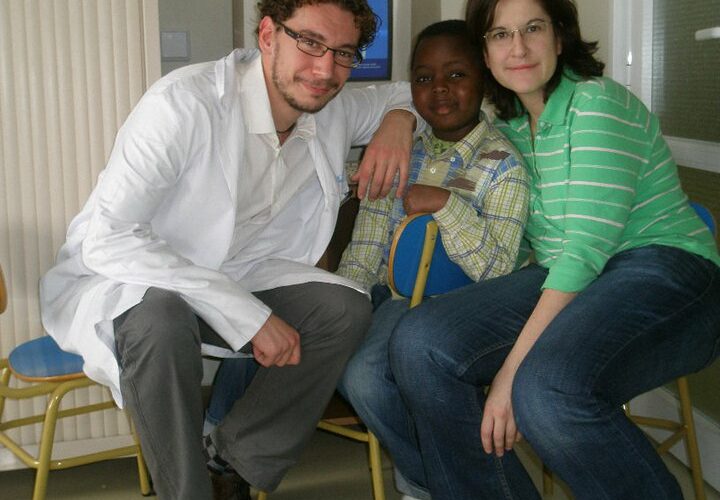 Nine-year-old Emmanuel was diagnosed with leukemia in 2008. Kennedy, his father, did all he could to secure his treatment.

He finally managed to fly out of the country with Emmanuel in search for further treatment.

In this third and final part of our series featuring a father’s love that pushed him to seek all modes of treatment for his son, we look at Emmanuel’s treatment out of the country.

The doctors informed Kennedy that Emmanuel would begin with chemotherapy, but would be forced to do a bone marrow transplant if the boy did not respond.

This was a bit worrying for Kennedy as it meant Emmanuel’s mother, Mercy, and his three-year-old brother would have to travel to Spain for tests to determine whose bone marrow was most compatible with Emmanuel’s in case a transplant was required.

Kennedy says that his son responded well to treatment, adding that he was optimistic that Emmanuel could not need a bone marrow transplant.

Life was not simple since they were in a Spanish speaking territory and this proved a challenge to both Emmanuel and Kennedy. Anyway, little Emmanuel mastered the language sooner and at times did some translations for Dad.

Both of them now speak Spanish.

Asked whether he preferred Spain to Kenya, Emmanuel says he likes Spain because he had many toys and was enjoying learning Spanish which he says was interesting.

“I love my mum and brother too much to be away from them for very long.” Emmanuel says.

Kennedy says he is grateful to the government, through the Ministry of Internal Security, for understanding his situation and allowing him time off to attend to his son’s demanding health condition.

He is also grateful to the Kenyan Embassy in Spain, which was not only following up on Emmanuel’s welfare in Spain, but also kept his employer updated on the boy’s condition.

Kennedy also thanks The Max Foundation– USA among other organizations, for their support.

“The Spanish health facilities were so modern. I could then learn why countries like Kenya are always referred to as third world countries.” Kennedy says.

They arrived back in Kenya last year April 2011 when the doctors confirmed that Emmanuel was now out of danger.

Kennedy hopes that the recent discovery of oil in Turkana may improve our economy and enable Kenyans access basic needs, health being one of them.

He urges everyone to go for routine cancer checkups because early detection leads to a high chance of survival.

When his son fully recovers, Kennedy says he plans to volunteer with any willing organization or foundation to create awareness on pediatric cancer as well as help children with cancer understand that there is life after cancer.

He thanks the president for signing the cancer bill into law. He adds that if all departments work together towards implementing this law, it is going to be a big relief to all cancer patients and their carers.

For now, the officer spends time researching about cancer online as his son continues with education.

Emmanuel is a standard three pupil in one of the schools in Nakuru besides attending a routine monthly management and checkups at Aga khan Hospital Nairobi.

Emmanuel dreams of becoming a Journalist/musician or a pediatrician when he grows up. He is Real Madrid soccer fan.

Kennedy says the monthly visits to hospital and other management costs are still taking much of his low income and at times, he is forced to borrow from friends.

“I now have many debts but I hope one day I will pay them all.”

Kennedy wishes he had a life insurance cover as a surety of Emanuel’s education and cancer management.

“My pay cannot allow me to make the monthly premiums since am the only bread winner in my entire family. My dad  after dad passed on while we were young.” He says.

Kennedy says that some of his friends in Spain who used to support him financially are facing financial challenges. Sadly, Kennedy says some have since lost their jobs.

Since I am servicing a bank loan I took in 2009 to pay most of the hospitals bills, am considering starting an alternative income generating activities.

“I am thinking of a zero grazing unit and a green house, as our land supports farming. I have struggled to put up a structure for two cows and planted some fodder. Am hoping find some funds to buy the cows. A Briton friend offered me some materials to construct a greenhouse but I am still lacking aluminum steel frames to complete the construction. Am hopeful that God will open more doors,” Kennedy narrates.

Ever since Emmanuel started been unwell, Kennedy has never had quality time with his friends because he is pre-occupied with where to get the next month’s check up fee, transport from Molo to Nairobi and school fees balances among other financial demands.

I would like to thank Nakuru Hospice for opening its door to the people of Nakuru as they will be able to access quality palliative care services that have been out of reach for long.