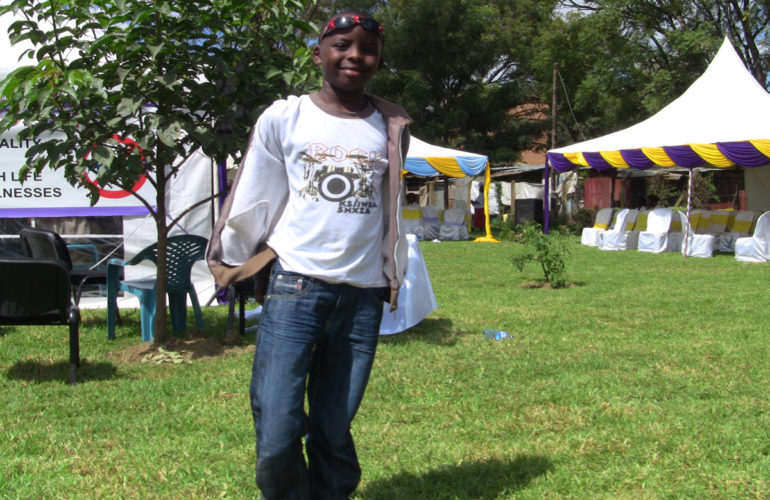 Kennedy’s son was diagnosed with leukemia in September 2008, admitted at Gertrudes Hospital and later transferred to Kenyatta National Hospital due to financial pressure.

When he exhausted his friends for blood donation, he chose to send a message to a radio station.

In part two of this story of a father who went to all lengths to save his son from leukemia, we find out if the message yielded any fruits.

After Kennedy sent a message to one radio station to appeal for a blood donation, the presenter called in shortly after to confirm his request.

“She later ran the request on the radio airwaves. To my surprise and luck to Emmanuel, many people turned up to donate. It was a miracle I stand to testify to date.” Kennedy says.

Later that week, Kennedy says a businessperson from Nakuru, sent him a cheque to support Emmanuel’s treatment.

“I saw many children with cancer die at the hospital, but I kept praying that Emmanuel would live to tell a different story,” says Kennedy.

Kennedy wished he had a comprehensive medical cover to see his son through the treatment in Gertrudes or Aga Khan. He only prayed to God for help.

“Many discouraged me from spending much of my savings or taking a bank loan. They told me cancer takes all the resources from a person and its cure is not guaranteed. Others said it is a death sentence while others told me that this is a disease for the rich and I could not afford its treatment. I only called on God and the love for my son kept me going.” Kennedy narrates.

Kennedy says he kept on networking and crying louder to his friends as the bills piled up because his son was admitted at Kenyatta National Hospital’s Private Wing.

Kitur’s prayers were answered after a local daily highlighted the boy’s plight on January 14 2009.

A Spanish priest whom Kennedy had met 10 years earlier saw the article and was touched.

“Fr Fernando Aguire of the Missionary Community of St Paul called to tell me he had seen the article and wished to see me. He was in Lodwar (North-Western Kenya) while I was in Nairobi,” recalls Kennedy.

A few days later, the priest visited Emmanuel and his father in hospital.

Fr Fernando told Kennedy that although they had been out of touch for ten years, he wanted to try and reach out for help.

He got in touch with Mensajeros De La Paz (Messengers of Peace), a Spain-based charitable organization run by a Catholic Priest Fr Angle Garcia, and asked for assistance.

“I felt relieved but this did not last long as trouble set in at Kenyatta National hospital. I had an outstanding bill of over KES 210,000. The hospital refused to discharge Emmanuel.” Kennedy says.

He adds that they stayed for three more days begging the hospital to release the boy to proceed with treatment but their cry yielded close to nothing.

This later caught the attention of a local gospel singer who tried her best to see if the hospital could waiver the bill.

She gave me all the emotional support alongside her father who also prayed daily for a door to open for Emmanuel fly out.

Later Prof. Anyang Nyong’o, Minister for Medical Services, sent a request letter to the hospital management to consider releasing Emmanuel with an agreement to pay the bill later.

“I wish to thank Safaricom Foundation and National Hospital Insurance Fund who help me to pay part of the outstanding medical bill before we the hospital agreed to release Emmanuel.

Though the organization does not directly help cancer patients, Kennedy says Mesanjeros De La Paz offered to support Emmanuel’s treatment, living expenses for the caregiver and hospital stay in Spain.

We flew soon after Emmanuel’s release from the hospital.

Kennedy accompanied his son to Spain to see him undergo further treatment. In the third and final part of this series, we will find out how the treatment progressed.